Where Is Black Life Lived?

A Letter Home from Joshua Bennett

The plot of ill-gotten land where my grandparents first locked eyes was 116 miles away from the town of Lillington, NC. A place so named for the man that claimed legal ownership over my grandmother’s grandmother, as well as the rest of her kin. In spite of the brutal absurdity of this fact, and indeed, in spite of a social and juridical order founded and built from the ground up by such facts, such brutality, my grandmother and grandfather, Charlotte and Levi, persisted.

In 1944, they moved from North Carolina to New York. There, my grandmother opened and operated three beauty salons within the boundaries of that irreducibly hip, invincibly black, cultural Mecca: Harlem. Over forty years, and seven children, and more than three times that number of grand- and great grandchildren later, I emerged into the world of one of her beauty shops, shimmering from the summertime heat.

I was seven years old. I did not yet know how to spell the word cosmetologist, but I loved that it reminded me of both comic books and comets, my favorite things back then. My grandmother spent her life making strangers and friends alike feel beautiful. The older women in the salon would pay me a dollar whenever I spelled a word three syllables or longer: malfeasance, indubitable, recalcitrant, loquacious. When I went on an especially good run, I could walk into the neighborhood bodega with eight dollars of cold hard cash, stuffed as if contraband into my freshly ironed khaki shorts. Do you know how many Peanut Chews and Swedish Fish you can buy with eight dollars? A lot. To borrow a phrase from June Jordan: I was a millionaire in love.

This was where I fell in love with language. I learned to maneuver it, to appreciate its strength. I came to adore the salon for the robust social life it held within its four, blue walls. Yes, I was small, and still wore high socks. I had a high voice and a high-top fade, a laugh too big for my body. Yes, I was a black American child in a country that despised us, and reminded us of that ire quite often, most frequently in the bodies of security guards at our school, or bus drivers who called the police on us when we acted up, or the prison cells holding our cousins, parents, big brothers.

When we turn to the written page, where is Black life lived? Anywhere. Everywhere. Underwater, outer space, underground.

There was no such thing as death in the salon, though. There was only the latest gossip and Motown-era Marvin Gaye on the radio, an entire atmosphere of sounds and smells too perfect to have been engineered on planet Earth. You could have filled a hundred beauty shops with what I didn’t know back then. But I was acutely aware of a certain truth I have not forgotten since those days: what we built in that space was indeed a refuge, but it was also something infinitely greater than that. It was a world on and in our own terms. A haven and a home.

This past March, at the outset of the COVID-19 pandemic, my grandmother, Charlotte Elizabeth Ballard, left this earthly realm. She died with her daughter, my mother, right beside her bed. In the same apartment in the South Bronx projects where she hosted Christmas every year, reciting folktales and Harlem Renaissance-era poems from memory. At that point, we did not yet know what the shape of the historical moment would be. We were unprepared. I went to grandma’s funeral via Zoom. When that link failed, several of the distant attending moved to cousin Jennifer’s Facebook Live. The director of the funeral home was a man named Isaiah, whose voice and image now adorn a recent profile from the New York Times entitled Coronavirus ripped a hole in NYC’s Black Community. I remember arguing with him over protocols for social distancing only days before the ceremony. I regret it now. The impossible distance between my Massachusetts apartment and a New York City building packed to the walls with the pandemic dead, an expanse mediated only by this invisible tether between us, connecting our voices, made a simpler version of the encounter impossible. For much of the service, I could not see my grandmother’s face. The angle of my sister’s tablet, my cousin’s iPhone, would not allow it. They did their best. It was all we had available. The commitment to care for our people means you make do with what you have at hand. I wrote her obituary on the same laptop I used to write this letter. The last sentence of it was: She was loved.

Outside, or perhaps alongside, the litany of losses we have all experienced during the COVID-19 pandemic, what new ways of feeling close to one another have we cultivated during this period of absence and alienation? When I think of the past four months, I see both a sequence of tragedies and an ongoing refusal to be destroyed by them, relayed through a screen: the funeral, the news of the deaths of Ahmaud Arbery, Breonna Taylor, George Floyd, Tony McDade, Elijah McClain and so many others, numerous family members diagnosed with the virus, not being able to remember the last time I held a friend or even spoke to one as we sat in the same room.

Adjacent to these more difficult moments, somehow, is the process of my becoming a parent, seeing my child grow as the landscape transforms all around us. In honor of that surreal and yet wonderful occasion, I thought it might make sense to take some time today and share at least one of the pieces of writing that has taken on new meaning given my particular experience of grief and celebration in this period. The process of witnessing, simultaneously, on one hand the state of emergency caused by the converging pandemics which are currently engulfing our planet (and not only COVID-19, of course, but anti-blackness, that perennial ecological catastrophe), and on the other the emergence of my son into the realm of the living.

The most human thing I could do here, I realized, was to provide a window into the varying forms of mediation that have shaped my days, as well as the varied forms of human sociality that strain against and emerge through those forms of distance. The laptop screen, the BabyCenter app on my phone, the revolving glass door at the hospital. Seeing a colleague on the street and raising our elbows in solidarity, our masks failing to cover our smiles entirely. This letter ends in a poem, is what I’m trying to say. It’s from a sequence that is at the core of a new book I’m writing about black disposability, environmental degradation, and fatherhood. It recalls a world before the pandemic, and gestures toward the one we are building together, even now, in the midst of it.

One more thing: I’ve been thinking quite a bit recently about the role of air in African American letters. The people that could fly. Eric Garner. Christina Sharpe highlighting the link between anti-black racism and the weather. It bears remembering. For the legal studies scholar, and foundational critical race theorist, Derrick Bell, one of the first characteristics of the black utopia he describes in his classic vignette, “Afrolantica Awakening,” is that it is simply a place where we can breathe. A space of celebration and retreat, somehow flourishing both inside and beyond the constraints of the present order. The sanctuary; the dancehall; my grandmother’s salon, glistening at a distance. When we turn to the written page, where is Black life lived? Anywhere. Everywhere. Underwater, outer space, underground. Even where there is no air at all. We imagine it as if it were otherwise. We conjure a world that is worthy of us. And then we gather there: unbowed, unburied, unabashed in our joy.

God bless the lightning
bolt in my little
brother’s hair.
God bless our neighborhood
barber, the patience it takes
to make a man
you’ve just met
beautiful. God bless
every beautiful thing
called monstrous
since the dawn
of a colonizer’s time.
God bless the arms
of the mother
on the cross
-town bus, the sterling silver
cross at the crux
of her collar bone, its shine
barely visible beneath
her nightshade
navy, New York
Yankees hoodie.
God bless the baby boy
kept precious
in her embrace.
His wail turning
my entire row
into an opera house.
God bless the vulnerable
ones. How they call us
toward love & its infinite,
unthinkable costs.
God bless the floss.
The flash. The brash
& bare-knuckle brawl
of the South Bronx girls
that raised my mother
to grease knuckles, cut eyes,
get fly as any fugitive dream
on the lam,
on the run
from the Law
as any & all of us are
who dare to wake
& walk in this
skin & you
best believe
God blessed
this skin
The shimmer & slick
of it, the wherewithal
to bear the rage of sisters,
brothers, slain & still function
each morning, still
sit at a desk, send
an email, take an order,
dream a world, some heaven
big enough for black life
to flourish, to grow God
bless the no, my story
is not for sale
the no, this body
belongs to me & the earth
alone the see, the thing
about souls
is they by definition
cannot be owned God
bless the beloved flesh
our refusal calls
home God bless the unkillable
interior bless the uprising
bless the rebellion bless
the overflow God
bless everything that survives
the fire

Rumaan Alam and Jameson Fitzpatrick on Sex, Poetry, and Textiles 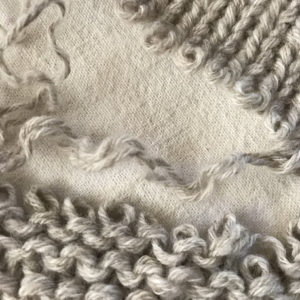