On Writing in a New Dark Age

To call the relationship between storytelling and technology symbiotic would be to miss the mark by a number of degrees. The two line up like an ouroboros reconfigured as a perpetual motion machine: technology has both an ongoing role in affecting the way that stories can be told and is the source of inspiration for many of those stories. This isn’t limited to science fiction: for example, think of the ways that the existence of smartphones turn a number of familiar stories and tropes on their head. A tale of being lost, or cut off from information, or unable to reach someone might no longer be plausible from a certain year forward—but the rise of new technology also creates a slew of new stories to be told.

The overlap between observers and practitioners of the overlap between technology and storytelling, particularly in its literary permutation, is small indeed. For several years, I attended an event called Book^2 Camp, which brought together writers, technologists, publishers, and more. (Margaret Atwood, no stranger to explorations of technology in fiction, was among the attendees one year.) One long-running observer of the overlap of technology and all things literary is James Bridle, whose blog, booktwo.org, has situated itself at their overlap for over a decade.

In 2011, Bridle presciently wrote that “[t]ext lasts. It’s not platform-dependent, you don’t just get it from one source, read it in one place, understand it in one way. It is not dependent on technology: it is what we make technology out of.” Bridle’s new book New Dark Age explores broader concerns—around surveillance, artificial intelligence, and technological overreach—but questions of text and narrative float just below the surface. Bridle both explores the way that stories inform the questions he poses in New Dark Age and uses numerous texts to illustrate his examples throughout the book.

“History—progress—does not always go up and to the right; it’s not all sunlit uplands. And this isn’t – cannot – be about nostalgia. Rather, it is about acknowledging a present that has come unhinged from linear temporarily, that diverges itself in crucial yet confusing ways form the very idea of history itself. Nothing is clear anymore, nor can it be. What has changed is not the dimensionality of the future, but its predictability.”

Seeking out many of the works cited in Bridle’s book will send readers down a speculative and science fictional path, including Kim Stanley Robinson’s generation ship saga Aurora, Iain M. Banks’s galaxy-spanning Culture novels, and the Grant Morrison-penned hallucinatory/revolutionary comic The Invisibles. And while writers using futuristic technology to evoke the questions of the present, Bridle’s book also raises another question: are today’s fiction writers neglecting the potential of the present time for some of these dilemmas and questions to play out?

“The two line up like an ouroboros reconfigured as a perpetual motion machine: technology has both an ongoing role in affecting the way that stories can be told and is the source of inspiration for many of those stories.”

Aspects of New Dark Age incorporate thoroughly unsettling imagery. A section detailing the melting of Siberian permafrost—which releases methane, along with dead animals infected with anthrax bacteria—seems tailor-made to inspire science fictional thrillers and horror stories alike. Here, too, there are greater echoes of the symbiotic rapport between science and speculative fiction. In early 2016, Jeff VanderMeer cited Roy Scranton’s Learning to Die in the Anthropocene, which explores the horrific ramifications of climate change, as a life-changing book for him. “For me, it crystallizes and expresses what I’ve been thinking about and trying to get a grasp on,” he said—which makes the altered bodies and transformed landscapes of his recent books Borne and The Strange Bird take on a new significance.

There are glimpses in New Dark Age of the ways in which Bridle’s concerns overlap with contemporary subjects of fiction. “Self-confirming groups, from Targeted Individuals to Morgellons sufferers, and 9/11 truthers to Tea Partiers, seem to be a hallmark of the new dark age,” he writes late in the book. Shortly thereafter, he offers an even more concise summation: “The conspiracy theory is the dominant narrative and the lingua franca of the times: properly read, it really does explain everything.”

All of this, then, suggests that science fiction may not be the only way to address the technological anxieties of the present moment. Consider the way that novels as stylistically varied as Alex Shakar’s Luminarium, Jonathan Lethem’s Chronic City, and Thomas Pynchon’s Bleeding Edge chronicle the experience of spending abundant time in an online community. Consider the ways in which books like Dana Spiotta’s Stone Arabia and Rivka Galchen’s Atmospheric Disturbances turns the experience of paranoia and mental illness into humanistic statements about contemporary life.

Both Spiotta and Galchen have distinctive takes on the way that their fiction grapples with contemporary concerns. In an interview with Hermione Hoby, Galchen made an incisive comment about her own approach to fiction. “It’s a kind of counterfactual thinking, and counter-factual thinking is uniquely good at revealing the ordinary things we don’t quite see because we’re so accustomed to them.” And in a 2012 interview about the nature of fiction with BOMB, Spiotta observed that “history owns the verifiable facts, but everything else—all our personal memories—are these constantly mutating, deeply connected, constructed things. Novels can occupy the space between consciousness and facts.”

Curiously, a critical essay from almost a decade ago provides a fascinating counterpoint to Bridle’s book. Marco Roth’s “The Rise of the Neuronovel” was published in n+1 in 2009. In it, Roth examined several decades’ worth of novels in which various psychological conditions were foregrounded, with an eye towards understanding why this had become increasingly prevalent in contemporary fiction.

Midway through his essay, Roth writes that “[b]ooks like Lethem’s Motherless Brooklyn (1999), with its Tourettic narrator, load almost the entire burden of meaning and distinctiveness onto their protagonists’ neurologically estranged perceptions of our world.” And while Roth is ultimately skeptical of these works’ ability to convey altered perceptions of the world—more on that in a moment—that sense of perception lines up fairly neatly with what Bridle discussed a decade later in New Dark Age.

By the end of “The Rise of the Neuronovel,” Roth argues that “the neuronovel in its present form presents the experience of a cognitive defeat. We imagine that science might get there, but it hasn’t yet.’ And then he goes on to make an argument that lines up neatly with the ways in which Bridle observes the convergence of narrative and technology, even as they reach different conclusions: “What’s strange is that science, as it moves in the direction of a total redescription of the mind in terms of the brain, may merely be replicating and systematizing the earlier insights of the psychological novel.”

Early in New Dark Age, Bridle refers to “an argument for a more thoughtful engagement with technology, coupled with a radically different understanding of what it is possible to think and know about the world.” Whether writers are dreaming of a technologically plausible future or examining the ways in which our minds interface with the world around us, much of that understanding is likely to come from literature. In examining the unpleasant truths of our present moment, Bridle’s book also serves as a means by which writers may be inspired in unexpected ways, and help chart the boundaries of a new (and hopefully better) world. 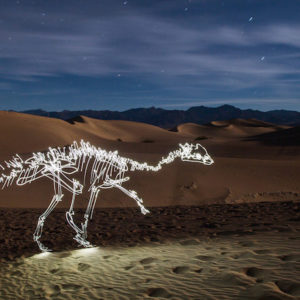 In the summer of 2009, I came across a newspaper item about a Montana man convicted of stealing a dinosaur. The idea sounded...
© LitHub
Back to top