The space in which you spend your childhood is like your mother tongue, a kind of language that you speak more fluidly than any you learn later in life. I grew up in an old house, and except for a few stints in apartment buildings—including a Beijing complex built in the 80s that looked like a Miami condo shrouded in dust—I have usually ended up in old and haunted houses in need of significant repair.

On the first night in our current rental, the old house greeted us, and not in a “happy to have you” kind of way. Minutes after I showered, water burst through the pipes under the bathtub and onto our dining-room table, which the movers had just delivered that afternoon. I was downstairs on the couch in the dark—my husband and I had not yet unpacked the light bulbs—and I inched toward the steady drip-drip-drip until my toes touched the puddle.

I think I actually said “hello” out loud. I asked that the house be kind for the remaining ten months of our lease. Then I stubbed my shins while searching for towels in the dark.

It seems like this current old house and I came to a mutually beneficial agreement, but I won’t know for sure until we need to turn on the heat this winter.

As a kid I liked to tell strangers, “I live in a white house with blue shutters,” because it sounded like a storybook description, a house made for enchantments. The house of my childhood was Italianate Victorian, built in the 1840s, so I could also say I lived in a house that was over a century old, a good phrase to have handy if you’re a child who’s into period-specific melodrama. (Check.) Inside: a long bannister to slide down and two “secret passageways”—closets that connected my parents’ room to the bathroom, my room to an unused guest room. I hid in those closets and fantasized about ghosts hiding there, too. We lived near a cemetery where the family who’d built our house was buried; it seemed a good bet that our house would be haunted, and as far as I was concerned, that only added to its charms.

We moved in when I was about to start first grade. Before buying the house, my father had expressed reservations about the flat roof, but my mother’s love of old houses, and the fact that this old house was in the right school district, prevailed.

An old house is full of future regrets. Not just our soon-to-be leaky roof, but drafty windows and front doors painted shut. A menace of an old furnace that would eventually catch fire in the middle of the night. Walls made of crumbly horsehair that drove my mother crazy with sinus infections.

Before, we had lived for a year in a small apartment with walls that hurt to touch, like the roughest grade of sandpaper. My parents always fought there. Oh, they fought in the white house, too. But it was big enough to disappear in. I barely remember my father as a physical presence before the age of nine.

The house was heated with forced air. Each room had a vent, a metal grate on the floor. The overall impression in winter was of a few warm islands on an ice flow. Before catching the bus in the mornings, I filled the legs of my snow pants with heat from the vents. I caught my parents’ final fight through the one in the living room. They’d gone to the basement—I assume because they thought I couldn’t hear them. My younger neighbor was over that day, and she heard the fight, too. “Do you think your parents are divorcing?” she asked, in her characteristically ingenuous way. I sobbed and denied it and might have blamed her a little, but when my mother and father soon after announced their impending separation, I actually felt relieved.

Because then it was just me and my mother in the huge house, and I thought that was fine.

Our backyard pool was filled with murky water in which a sunfish I’d caught in Cayuga Lake swam lazy circles. Two ducks nested and laid eggs nearby. Before my parents’ divorce, my mother had bought two sheep; one white, one brown, and because we adopted them in 1984 and my mother was a democrat, she named them Walter and Jesse. She spun their wool and used it to knit the kind of sweaters one needs to wear in a house low on insulation in central New York. There were rabbits, too, whose cages were never clean enough. Indoors, I had an aquarium that was never clean enough. This is something my mother and I have always had in common: we might enjoy the appearance of clean rooms, but we despise cleaning. The rabbits had babies and most of them died. The aquarium fish had babies, too, some who lived, at least for a while, before succumbing to that horrible white film that is appropriately called ick.

When my mother told me she loved a man I had long suspected she loved and that he would be moving into our house in six months with his children, I cried. I was 11. We were watching the last episode of Family Ties. I feel like this almost sounds made up. I remember the Keaton family embracing as the credits rolled. My tears were for two impending losses: my show and what I understood my life to be about.

My mother tried to comfort me by telling me that the man she loved would fix the house, that he would fix the pool. My father was not handy, and we never had enough money for health insurance, let alone the kind of repairs that one could call “home improvement.” But the man my mother loved was gifted at building houses and on top of that had a steady job as a mechanic.

My mother’s parents lived in a series of beautiful houses. Visits with them were glimpses of a different kind of life, of objects and dwellings well maintained: filled with antiques, but not ghosts (at least, not the kind I could see). Beautiful things and well-preserved houses—a language my mother carried in her body but barely used anymore since she owned this house that was once probably beautiful and now pretty much a clunker.

Did I try to explain that I was fine with the clunker, the pool, and our one demented pool-fish? Even then I knew it wouldn’t matter.

I started writing serial stories inspired by the Christopher Pike books I devoured. (CP in a nutshell: stories aimed at middle schoolers in which violent and implausible things happen to young people.) I devoted a lot of time to crafting one story in particular, about a girl forced to move with her parents to a rambling pink house she hated, and in which her many dolls began coming to life and hatching evil plots. With the pride of a young writer, I titled that story “Pink Monster.” I can see the house of the title even now, the way I imagined it then: my dear white house made terrible with a fresh coat of Pepto Bismol.

I think that was the first story in which my own house served as the model for the fictional house. It was also the first of many melodramatic stories without a happy ending. To be honest, most of my stories had no endings at all because I simply didn’t finish them.

One weekend morning, my mother woke me to say that the man she loved and who would restore our house to some sort of structural integrity was moving in that day with his two kids. This was months before their planned arrival. In the middle of the night, he’d told his wife about my mother, with the expected results. (We all knew each other; this was a small town.) Minutes after this announcement, the man my mother loved showed up in his pickup, the kids in the front seat, the back of the truck filled with toys and suitcases.

It was not lost on me that I had often asked my mother for a brother and sister, and now that she had almost literally delivered them to my door, I wasn’t in the mood to thank her.

For years, this particular scene became the defining story of my life. From my angle, that story was a kind of home invasion tale—a girl’s house taken over by outsiders, her mother co-opted by kids she’d known much of her life but had never expected to share a room with.

In my first semester at college, the angle had stayed pretty much the same, until thankfully a writing professor called me out on it. For my final paper in his class, I handed in what was perhaps an early draft of the essay I am writing here; at the time it was titled, unimaginatively, “The House.”

In his comments on the paper, my teacher said he wished I’d been “more objective,” the only bit of criticism in a bed of laudatory notes about the prose, the tone, the images of me alone in the living room with a tape recorder, recording myself telling stories and hoping for ghosts to appear. I have my old copy next to me now; I found it one of the many times I have unpacked during a move from one old house to another. It’s embarrassing to read, the sentences so clunky and over-determined. I had forgotten all my professor’s praise, because really it was unnecessary—or anyway, the praise was just a tool for getting me to pay attention to what mattered: that good writing requires hovering above the scene to render an honest picture. In this case the picture being that my step-siblings were going through something, too, and not by choice.

It sounds so obvious that I wish I could say it had occurred to me before, but I don’t think it did.

My mother and stepfather painted the white house turquoise and knocked down walls, erected others. I went about my life filled with righteous resentment about it, but I had to admit it was nice to have a pool you could swim in. Eventually though, they wrung all they could from the house and built a brand new one on land my stepfather owned, and I lived in that house for my final three years of high school.

For years, whenever I dreamt about a house, it was only the old one I saw, and even now when I write a story featuring a house that is basically falling down around the people inside it, I picture my characters moving through those familiar rooms with the peeling wallpaper, trying to open the front door that is painted shut. Their ceilings are high and often leaking. On cold winter mornings, they stand over the vent in the living room to warm up their feet.

My old house has become a little crowded since my characters moved in, but I’ll always find room for their regrets and dreams. They’re the ghosts I always imagined living in the closets, watching me sleep. 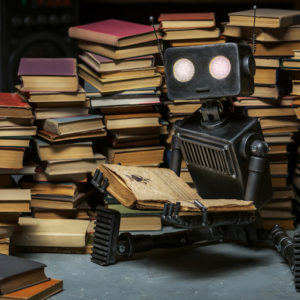 “Bookselling was and is for me a cultural and political expression, an expression of progressive change, of challenge to oppressive...
© LitHub
Back to top