Amanda Leduc on the FOLD Festival

When you’re involved in an industry that has often relied on in-person events to get the word out about authors and stories that you love, how do you adapt in the face of a world where in-person life is, effectively, cancelled? It’s a question that many of us in the literary and publishing industries have found ourselves asking in the last few weeks. For staff and volunteers at The Festival of Literary Diversity (FOLD), Canada’s first festival for diverse authors and stories, it’s a question that also presents an opportunity.

The Festival of Literary Diversity (FOLD) was launched in 2016 by Brampton, Ontario resident and author Jael Richardson. In the wake of publishing her first book, Richardson traveled to several literary festivals across Canada and noticed a troubling, persistent trend: at festival after festival, Richardson—a Black Canadian writer—was often the only person of color in the room. After meeting with Léonicka Valcius, a Black Toronto-based publishing professional who started the #DiverseCanLit hashtag, Richardson and Valcius hatched the idea for the FOLD: a Brampton-based literary festival that would celebrate and prioritize marginalized storytellers. At the end of 2014, the FOLD Foundation was launched, a not-for-profit corporation whose mandate would be—like our US counterpart, We Need Diverse Books—to celebrate diverse Canadian storytellers throughout the year.

In early 2016, I joined the FOLD staff as their Communications and Development Coordinator, and in May of that year, we hosted our first festival. The inaugural FOLD brought over 50 authors and performers to Brampton, celebrating storytelling in a myriad of forms through an exciting mix of panels, workshops, and feature events. Award-winning Canadian writer Lawrence Hill gave the inaugural festival keynote address, while established and emerging Canadian voices alike—among them Dalton Higgins, Waubgeshig Rice, Vivek Shraya, and Ayelet Tsabari—came to Brampton for three days of dynamic literary engagement. In 2017, we followed on the festival’s success by launching a monthly writing workshop program which eventually became FOLD Academy—a free webinar series where acclaimed diverse authors instruct writers in craft and technique, as well as an annual Reading Challenge, which highlights a different challenge each month to inspire booklovers to read more diversely.

In 2018, the FOLD’s off-season programming expanded again to include Writers at The Rose, a quarterly, pay-what-you-can reading series that brings acclaimed authors to Brampton. And in 2019, the festival expanded to international authors and added a free fall festival to round out the year: the FOLD Kids Book Fest, a two-day festival celebrating children’s literature that takes place in Brampton at the beginning of October.

2020 marks the FOLD’s fifth anniversary. It’s already been a tumultuous year—both for publishing, and also for the world. But maybe it’s a year that can also hold opportunity. Due to the current global crisis, we’ve had to cancel our plans for the in-person FOLD in Brampton this May. In its place, we’re excited and thrilled to debut our first-ever online-only festival weekend. We’ll be featuring nearly all of our originally scheduled programming via streaming video, accessible from anywhere in the world. Everything will be captioned. Everything will be free. It’s going to be our most accessible, wide-ranging festival yet. (And our authors get to participate from the comfort of their own homes, quite possibly in their pyjamas. Can you say win-win?) Our website has updates on how to register, and instructions for signing up for all sessions will be made available on April 5.

As a disabled writer myself,  it’s been an honor and a privilege to be with the festival and see how it has grown—to recognize how far we all still have to go when it comes to being inclusive, yes, but also, to work toward it and realize what is possible. And never was that more apparent than in the decision to move the festival online.

That decision was at once immediate and also difficult. We knew we had to protect our community, but we also knew we had to protect our writers. Writing is already a precarious career, and in the fallout from the pandemic the FOLD was determined to ensure that we would pay our writers as we’d originally planned. The question was: could we alter the festival format so that the writers could get paid and programming could still go on?

The festival would continue, but we would do it virtually, and use the opportunity to reach an even wider audience than before.

One of the things we’ve learned over five years of programming the FOLD is that celebrating the work of underrepresented storytellers requires constant innovation and adaptability in order to be barrier-free. The Internet and social media have proven powerful tools for us in this regard, as they allow us to reach people in a way that circumvents many of the traditional barriers (economic, physical, social) marginalized writers are faced with when they participate in the literary community. (Our FOLD Academy series is hosted online for free because accessing writing instruction can be costly for so many; our Writers at The Rose series is pay-what-you-decide for exactly the same reason.)

And so, faced with the reality of having to cancel in-person events, the FOLD staff and our Board of Directors came to a unanimous decision: the festival would continue, but we would do it virtually, and use the opportunity to reach an even wider audience than before, to make the festival as barrier-free as we possibly could.

Real, lasting change in the publishing industry can only come about when the industry itself asks this question: who is missing? Who are we not including in the stories that we tell, and who are we not including in the systems that help to share these stories in the first place?  We started our work at the FOLD by pushing for publishers and literary organizations to feature diverse writers in all of their lineups. But it soon became clear to us that this wasn’t enough; in addition to featuring diverse writers, publishers and literary organizations need to hire diversely. They need to hire people of color. They need to hire LGBTQ2SIA+ people. They need to hire disabled people. And they need to listen, constantly, to people from all of these communities.

When disabled author Dorothy Ellen Palmer wrote to us in 2016 to point out that our initial festival line-up didn’t include anyone who was visibly disabled, and gently asked us how our concept of diversity could exclude disability in such a prominent way, we took note, and made changes. We invited Dorothy to be a part of our inaugural festival. A year later, we instituted our Accessibility Advisory Committee, a group of disabled readers and writers who consult with us on how to make our events as accessible as possible. Their input has been an invaluable part of ensuring different accessibility measures are in place, and has helped us to learn how to be creative and innovative when solving festival problems (like, for example, what to do when you can no longer hold your physical festival because of a pandemic).

At the festival, sessions like Pitch Perfect pair emerging writers with agents and editors for one-on-one feedback on their manuscripts, while our Sunday Writer’s Hub book fair has offered emerging writers the opportunity to connect directly with publishers looking for submissions. Throughout the year, the FOLD Academy webinars offer an opportunity for emerging writers to access writing instruction that’s free of many of the traditional socioeconomic barriers that marginalized writers may face, while the monthly FOLD Challenge and our Writers at the Rose series help book lovers across the country discover new writers they might never have encountered.

As diverse writers and readers, we’re often made to believe that our ways of viewing and being in the world are niche, not the norm, not something that has “wide appeal.” But here’s a secret that’s not-so-secret anymore: the world is changing fast, spiraling outward beyond the status quo of the predominantly white, cis, able-bodied story. And those of us who have different stories to tell are uniquely placed to usher in this change.

There’s no doubt that change can be frightening. But change can also be galvanizing, a force that sweeps the world into its path. The world of the last few weeks has shown how art—especially art that shows us a view of things that we might not have seen before—is crucial to our hearts’ survival.

Amanda Leduc is a disabled writer and author of the non-fiction book DISFIGURED: ON FAIRY TALES, DISABILITY, AND MAKING SPACE (Coach House Books, 2020) and the novel THE MIRACLES OF ORDINARY MEN (2013, ECW Press). Her next novel, THE CENTAUR'S WIFE, is forthcoming from Random House Canada in the spring of 2021. She has cerebral palsy and lives in Hamilton, Ontario, Canada, where she works as the Communications Coordinator for the Festival of Literary Diversity (FOLD), Canada's first festival for diverse authors and stories. 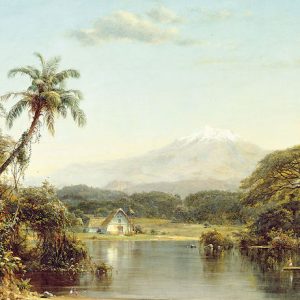 Under orders from the Spanish Crown, Rodrigo de Bastidas reached the coast of South America in 1501. Sailing westward from...
© LitHub
Back to top