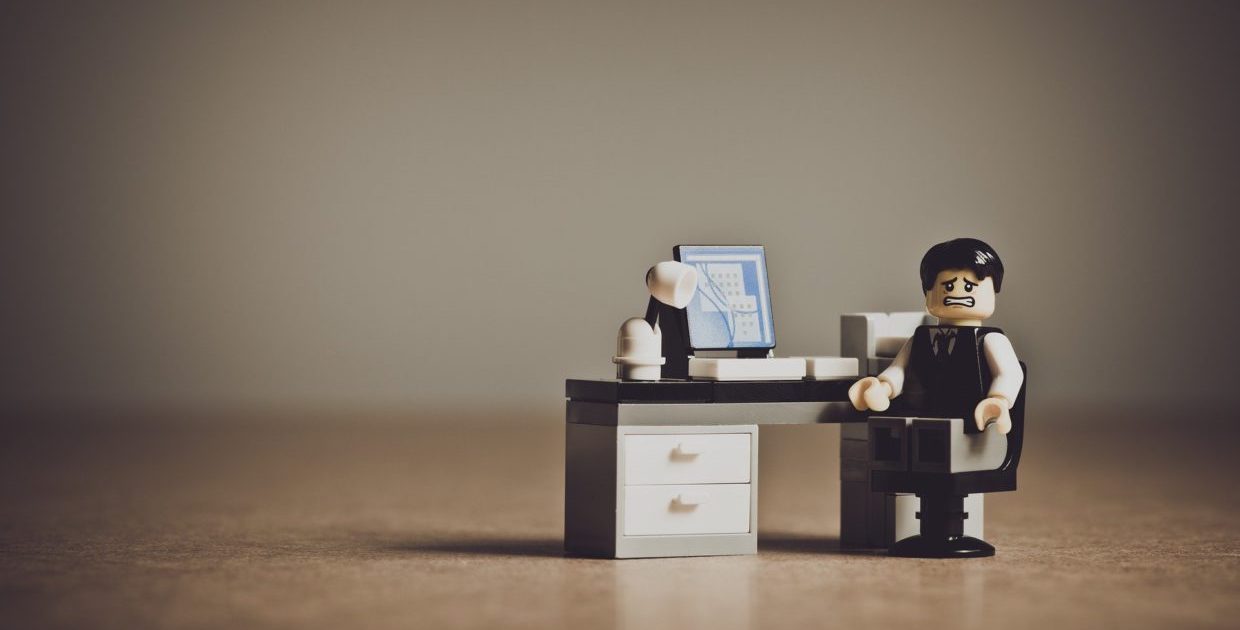 When It Comes to Email, Corporate America Should Emulate Academia

In early 2016, I published an article on the Harvard Business Review’s website that I gave a purposefully provocative title, “A Modest Proposal: Eliminate Email.” Though I’d been writing about the unique miseries of this technology on my blog, this piece was one of my first mainstream essays on the ideas that would eventually coalesce into the book you’re currently reading. At the halfway point of the article, after I’d reviewed the issues caused by the hyperactive hive mind workflow, I delivered my big conclusion: “There’s great advantage for those organizations willing to end the reign of the unstructured workflow and replace it with something designed from scratch with the specific goal of maximizing value production and employee satisfaction.”

In my original draft, I was happy to leave the argument there. My editor didn’t agree. He rightly pointed out that the idea of abandoning email was so novel that there had to be at least some suggestions about how an organization might function in its absence. I hadn’t yet worked out the details of attention capital theory at this early point in my thinking, so I didn’t have a ready answer to my editor’s question of what replaces email. Grasping for an example, I found inspiration in an activity common in my own world of academia: office hours. As I elaborated:

The concept is simple. Employees no longer have personalized email addresses. Instead, each individual posts a schedule of two or three stretches of time during the day when he or she will be available for communication. During these office hours, the individual guarantees to be reachable in person, by phone, and by instant messenger technologies like Slack. Outside of someone’s stated office hours, however, you cannot command their attention. If you need them, you have to keep track of what you need until they’re next available.

Much to my disappointment, this 2016 article didn’t immediately spark an anti-email revolution. One commenter pointed out, correctly, that office hours would be a poor fit for organizations with employees that spanned multiple time zones. Another wrote that they’d rather have more email than more meetings. “To attempt to outlaw email now is like trying to bolt the barn door after the horse has bolted,” concluded another commenter. “It’s just not gonna work.” As my research on email continued, I pushed the office hours concept to the periphery of my thinking. As I later learned, however, I perhaps shouldn’t have been so hasty in dismissing this solution.

Let’s jump ahead to 2018, when Jason Fried and David Heinemeier Hansson, the iconoclastic cofounders of the software company Basecamp, published a book titled It Doesn’t Have to Be Crazy at Work. The book describes a collection of ideas for cultivating an effective workplace culture they call “the calm company,” and nestled among its suggestions is a familiar strategy: office hours. As Fried and Hansson note, their company contains many subject matter experts: “people who can answer questions about statistics, JavaScript event handling, database tipping points.” Accordingly, if one of their employees has a question about one of these topics, they can simply “ping” the expert to get an answer. Fried and Hansson have mixed feelings about this reality: “[It’s] wonderful. And terrible.”

The wonderful aspect is that these experts can help their coworkers become unstuck or identify more effective solutions to their problems. The terrible aspect, on the other hand, is that the experts get sucked into the hyperactive hive mind—devoting more and more slivers of time throughout the day to fielding these ad hoc requests. Basecamp’s solution, to my delight, was to introduce office hours. The experts now publish set hours each week during which they’re available to answer questions. For some experts, these office hours might be sparse, such as one hour per week, while for others they might be frequent, such as one hour every day. The company trusts the experts to figure out the availability that best matches their demand. Questions for these experts are then confined to those set office hours.

“But what if you have a question on Monday and someone’s office hours aren’t until Thursday?” Fried and Hansson ask. They provide a blunt answer: “You wait, that’s what you do.” They note that these constraints might seem overly bureaucratic at first, but that they’ve ended up a “big hit” at their company. “It turns out that waiting is no big deal most of the time,” they elaborate. “But the time and control regained by our experts is a huge deal.”

Further investigation reveals that Basecamp is not the only non-academic organization to deploy office hours in a limited manner. As I learned from Scott Kirsner, the Innovation Economy columnist for The Boston Globe, office hours have long been popular among venture capitalists. As he explains in a column titled “I’m Joining the Open Office Hours Movement,” many Boston-area investment groups, including Flybridge, Spark Capital, and Polaris Partners, have taken to putting aside regular times each week in which anyone interested in technology startups can show up, “no strings attached,” to ask for advice, pitch an idea, or just make a connection. As I learned profiling a Silicon Valley–based venture capitalist named Mike Jackson for my 2012 book, So Good They Can’t Ignore You, success in this industry depends on exposing yourself to lots of different ideas and people, but if this exposure is delivered through unsolicited email messages, you can accidentally drown trying to keep up. “It’s so easy to just come in and spend your whole day on email,” he warned. Office hours proved a good way for investors to balance these competing forces.

Claude Shannon’s framework helps explain why these examples work so well. For most types of coordination, moving to predetermined office hours will significantly reduce the cognitive cycle cost compared with simply bouncing messages back and forth in an ad hoc fashion. Having to wait until the next scheduled office hour to communicate, however, can induce an inconvenience cost. Office hour protocols seem to work best for activities that are not too negatively impacted by these delays. This is why Basecamp’s experts and Boston’s venture capitalists embraced office hours: they reduced the large cognitive cost of distracting messages while introducing delays that didn’t yield any major impact on daily effectiveness. This is also why my 2016 suggestion of replacing all communication with office hours landed with a thud: there are many types of coordination currently handled over email for which long delays would be prohibitively costly. The conclusion is that any time you find yourself involved in a type of coordination activity that’s both frequent and non-urgent, an office hour protocol might significantly reduce its cost.

In the late 1990s, as a teenager caught up in the excitement of the first dot-com boom, I cofounded a technology company with my friend Michael Simmons. Because we lived near Princeton, New Jersey, and thought this was a prestigious-sounding address, we named the firm Princeton Web Solutions. We focused on website design, starting off by hand-coding sites for small businesses in the area. At some point, however, Michael connected online with a group of freelance developers based in India. We soon realized two key points. First, this team was much better at web development than we were, and second, their rates were quite low by American standards at the time. We struck a deal in which we would find clients and manage the projects while the Indian team would do the actual graphic design and HTML coding. In my memory, our first contracts were around $1,000. With the new team on board, we began landing contracts in the $15,000 to $40,000 range. The problem with all this, of course, was that we were teenagers living in the 1990s, meaning that we were in school all day and didn’t have cell phones. As a result, we were running large contracts for demanding clients who basically had no way to get in touch with us.

Our solution to this problem was to code up an elaborate client portal. Each client had their own username and password they could use to log in to the portal. Once inside, they were presented with detailed information about their project. Sample designs and pre-launch versions of their site were all available for review in the portal, as was a calendar that listed the major upcoming milestones. A “work diary” contained daily updates on what work had been completed that day. Most actual interaction about the projects was condensed to specific meetings that were connected to our detailed project process. Each of these meetings generated a corresponding memo outlining what we’d decided, which we asked the clients to sign, indicating that they approved. (We found that this minimized the chances that the client would later change their mind once development was underway.) Scans of these signed memos could be downloaded through the portal.

We never directly explained to our clients that we relied on our portal because we were in school all day—though I have to imagine they figured this out on their own—we just set things up so that this reality wouldn’t be an issue. Designers today often complain about how much time they spend dealing with emails. We were doing more or less the same work back then, but did so with basically no emails at all. 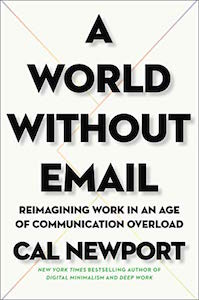 Excerpted from A World Without Email: Reimagining Work in an Age of Communication Overload by Cal Newport with permission of Portfolio, an imprint of Penguin Publishing Group, a division of Penguin Random House LLC. Copyright © Cal Newport, 2021.

Cal Newport is an associate professor of computer science at Georgetown University, where he specializes in the theory of distributed systems, as well as a New York Times bestselling author who writes for a broader audience about the intersection of technology and culture. He’s the author of seven books, including Digital Minimalism and Deep Work, which have been published in over thirty languages. He’s also a regular contributor on these topics to national publications such as The New>Yorker, The New York Times, and Wired, and is a frequent guest on NPR. His blog, Study Hacks, which he’s been publishing since 2007, attracts over three million visits a year and his podcast, Deep Questions with Cal Newport, has just surpassed 1 million downloads after launching in May 2020. He lives with his wife and three sons in Takoma Park, Maryland.

Impermanence and Eternity on a Weeklong Walk in the Sahara 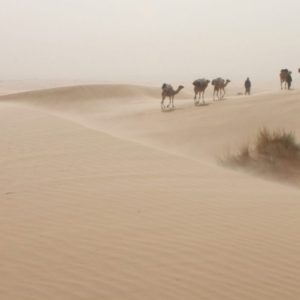 Impermanence and Eternity on a Weeklong Walk in the Sahara