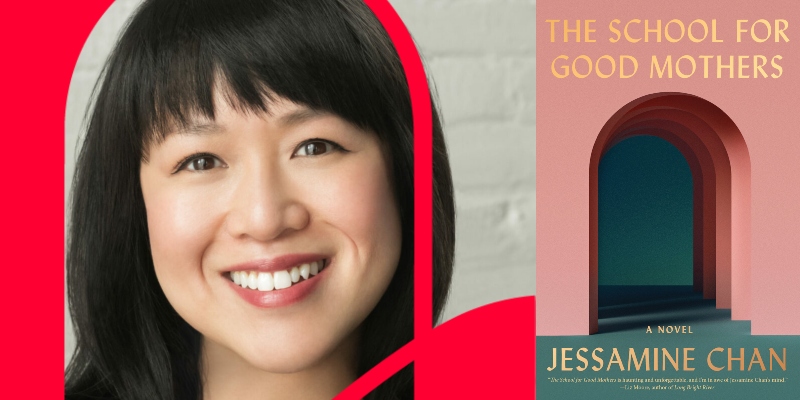 When Having a Baby Requires a Rewrite: Jessamine Chan on Parenthood and The School for Good Mothers

In this episode, Jordan talks with Jessamine Chan about the ways having a kid changed her writing, the difficulties mothers face in America, and the one very good day of writing that led to The School for Good Mothers.

“Where is Your Mother?” by Rachel Aviv (The New Yorker) • Cost of Living by Emily Maloney • The SCOTUS draft decision in Dobbs v. Jackson Women’s Health Organization • The Ragdale Foundation

Jordan Kisner: You were writing this book during the years when you were deciding whether or not to become a parent. How did those two processes interact with each other?

Jessamine Chan: Well, I have an almost five-and-a-half-year-old, so clearly I did make the leap into actually being a parent. I started the book in 2014 and had my daughter in 2017. And from 2014 until 2016, I was just writing the book and freaking out about whether or not to try for a baby. At some point we decided to go for it, in terms of having a kid. I was really struggling with that decision because I felt like I should wait until the novel was done and then get the book sold and then we’ll be in a better place, but who knows when the book is going to get done, and I was heading closer and closer to 40.

So we just went ahead with that. And then it took a really long time to get to writing after having my daughter, in terms of getting my brain to work again. But I think what helped me stick with the writing was, one, having a really supportive spouse and then being able to afford some childcare, which I know in this country is really impossible. And also the fact that I felt like this was an urgent project that I had to see through to completion. Even though it felt really, really hard to get back to the writing, I felt like I needed to to actually finish this book.

I think what felt urgent about this project, more than some of the other stories I’d worked on for years, was that I always worked on fairly contained stories about relationships. I would write about sex, I would write about relationships, and maybe there were some race and power dynamics, but this was the first project where I felt like I was writing about society and I was writing about something that I wanted people to pay attention to.

When I read the Rachel Aviv piece, and as I started noticing more of these stories about parents who’d lost custody of their children, I was just shocked that it so rarely makes the front page news, when it seems like one of the greatest tragedies is what if a parent is innocent and gets their child taken away by the government? And also the question of who gets to decide and the kind of power that individual social workers and judges wield over a family’s life. It’s something that I wanted people to think about more. And that’s different than some of the other projects I’d worked on before.

Jordan Kisner: It felt when I was reading, the book explores a lot of the things structurally, socially, but also emotionally and interpersonally, that feel daunting about the idea of parenting, particularly being the parent of a young kid. To what extent did you conceive of this book as an arena for testing out different fears, different angles, different hopes, different scenarios for your own possible parenthood? Or even, because you then had a kid, for your burgeoning parenthood that exists in this time and place as a young American parent?

Jessamine Chan: Well, I will say that I had a full draft of the book done by the time my daughter was born, and I was in the process of rewriting those individual chapters into chapter-shaped chapters rather than this big blob, which is what I had before. But I will say that the whole book had to be rewritten after having my daughter. I just got so many things wrong, really basic things. I had the toddler speaking in complete paragraphs because I had no idea how much a toddler spoke. I had the moms bathing the toddler dolls in sinks because I didn’t know a toddler doesn’t fit in the sink, because you don’t really have a sense of how big an 18- or 20-month-old is.

So there were some logistical things that I just did wrong. But I also had to rewrite it and really simplify the lessons based on real experiences, because in the early drafts, I had the moms literally running through burning buildings, having gas masks on and going through these crazy Mission Impossible style gauntlets. And I realized in revising that I didn’t have to hit the point quite so hard and that it would be possible to illustrate my point in a much quieter way.

And I didn’t know that very basic things like getting a child out the door in the morning where there’s gauntlets of emotion and that everyone would have high opera-level feelings in those 35 minutes of getting out the door. Or when my daughter would plant herself on the sidewalk at the park and refuse to get in the stroller and would make her body like a sandbag, which my therapist called the “protester resisting arrest move” and which I totally wrote into the book. But in those moments when the whole neighborhood is passing by you and you’re just there raising your voice at your child, and all of West Philly was turning around and staring at me… I didn’t realize how many feelings I’d go through in that 20 minutes. The book gave me an outlet for where those thornier feelings could go.

Jessamine Chan’s debut novel is The School for Good Mothers, an instant New York Times bestseller. Her short stories have appeared in Tin House and Epoch. A former reviews editor at Publishers Weekly, she holds an MFA from Columbia University and a BA from Brown University. Her work has received support from the Elizabeth George Foundation, the Bread Loaf Writers’ Conference, the Wurlitzer Foundation, Jentel, the Kimmel Harding Nelson Center, the Anderson Center, VCCA, and Ragdale. She lives in Chicago with her husband and daughter.

Finding Resonance in the Unreal: A Conversation Between Sam Knight and Sarah Krasnostein

Finding Resonance in the Unreal: A Conversation Between Sam Knight and Sarah Krasnostein

As Sam Knight says in the interview you’re about to read, "Even though I now write narrative nonfiction for a living, I think...
© LitHub
Back to top