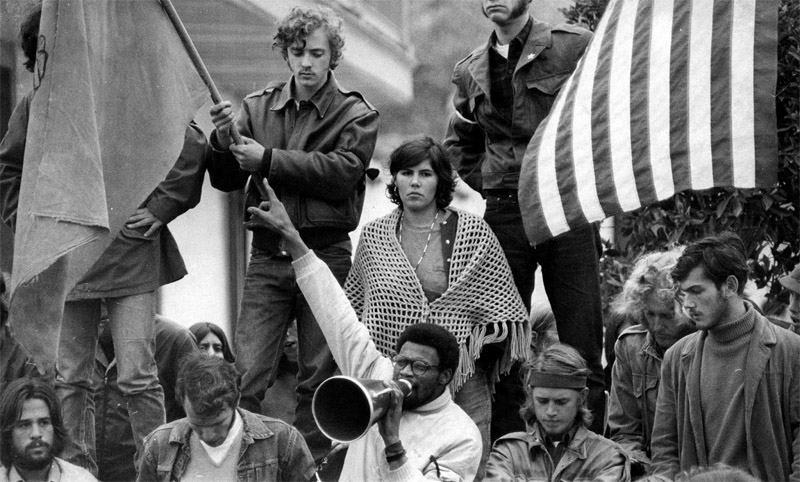 When America Was On the Brink of a Second Revolution

An Oral History of Campus Revolt in the 1970s

The crisis on American campuses has no parallel in the history of the nation. . .
[I]t is as deep as any since the Civil War.

In the immediate aftermath of the Kent State shootings, the largest student strike in United States history spread across the country. Two and a half million students, on 700 campuses, protested, rioted, and refused to go to classes or take final exams. Thirty ROTC buildings were bombed and governors ordered the National Guard to occupy 21 campuses in 16 states. President Nixon made a surprise appearance at the Lincoln Memorial at dawn on May 9th to talk to young protesters who were pouring into Washington, D.C., to demonstrate against the invasion of Cambodia and killings at Kent State. The next day, the Weather Underground bombed the National Guard building in Washington, D.C., and a student at the University of California, San Diego killed himself by self-immolation, emulating Buddhist priests who had done so in Vietnam. Meanwhile, tensions at Yale were high as the Black Panthers’ New Haven Nine began pretrial proceedings.

Nationwide student unrest led President Nixon to believe that the revolutionary youth movement was “determined to destroy our society,” and he ordered the FBI and other agencies to expand counterintelligence operations. Opposition to the war also plagued Nixon from inside his administration. Two hundred State Department employees signed a petition objecting to the invasion of Cambodia, and Secretary of the Interior Walter Hickel wrote a letter to Nixon criticizing him for failing to understand the student movement. When his letter was leaked to the press, Hickel received three thousand notes of congratulation. Nixon fired Hickel in December 1970.

TOM HAYDEN (Peace Movement leader, SDS co-founder): Just as we were trying to deal with all the tensions at Yale, Cambodia happens [May 1, 1970] and that adds to the total volatility of everything, the unpredictability of everything. The Yale rally then becomes the launching pad for a call for a nationwide student strike, and in the response that was being generated, Kent State happens. Then Jackson State happens. Then there’s this big, pretty spontaneous and massive demonstration where people are surging around the attorney general’s office, the Justice Department in Washington. And then Kingman Brewster, Jr. [president of Yale] led a delegation of Yale students, a thousand of them, to lobby Congress.

So now it’s everything from the most revolutionary to the most mainstream, all temporarily united against Cambodia and Nixon. It was a week of escalating madness. It was one jolt after another. They seemed to just keep on coming. People predicted a breakdown or revolution. The country seemed to be literally out of control, and we were improvising whatever tactics we could in the midst of something that was much larger than any one organization could handle.

MICHAEL KAZIN (Harvard SDS leader): There were student strikes, there were building takeovers, there were spontaneous demonstrations, there were smoke-ins. Ultimately, the count was 700 campuses and 2.5 million students. A lot of high schools, too. It just felt like if the college was not on strike, it must have been a pro-Nixon college. Because anybody who was opposed to Nixon and opposed to the war at that point was going to try to do something, especially after Kent State. Who knows what would have happened without Kent State? And Jackson State, for black students, was just as important. Radicals like me tried to make Jackson State just as important as Kent State, even though the press didn’t play it up. We wanted to show that the Nixon administration and their allies were willing to kill antiwar demonstrators who were peacefully demonstrating, and we couldn’t abide that. That was true for liberals as well as radicals like me.

I went to New Haven first. There was this big pro-Panther demonstration in New Haven. I tried to be everywhere. Wherever the action was, I wanted to be. I went back to Cambridge, and helped organize demonstrations, including the big one with 35,000 students marching from the Boston Common to Soldiers Field in Cambridge, on the Harvard campus. A few of us freelancers decided that we couldn’t have this demonstration be peaceful, and we decided when we got to Harvard Square, we would basically stage a riot. I hope that the statute of limitations has passed on these things.

TOM HAYDEN: The strike just happened, and it was led, in a lot of cases, by student governments. It was larger than any other student strike. In the spring of ’68, from Columbia to Paris, there were more countries involved with student strikes. But ’70 was so big that I think it was the turning point for the establishment. They knew that if they continued the war, there would be some kind of permanent rupture in American society.

BUD KROGH (Nixon administration aide): In one of the planning sessions at the Justice Department, the idea occurred to me that it would be better to protect the White House if we circled it with buses rather than a SWAT team or riot police. I think that proved to be true. I’ve always felt that if you removed the provocation—I think sometimes a line of police can almost provoke violence—and have something inert like a bus—what can you do to a bus? You can punch the tires out, break the windows, and write graffiti on it, but it’s not going to be a physical interaction. So we did that the night before the May 9th demonstration. We circled the White House with buses, and we had the Eighty-second Airborne military unit guarding in the Old Executive Office Building from the inside. They came in army trucks in the middle of the night, and we had an extra police and Secret Service detail. It was a siege environment.

STEPHEN BULL (Nixon personal aide): I don’t know how many buses there were, but they totally encircled Lafayette Park. They went completely around E Street, the south portion, where you can’t drive anymore, separating the south grounds from the Ellipse. You’d look out onto Pennsylvania Avenue, and there was no one there because it had been cordoned off. But on the exterior, you could hear the noise of what was going on outside. Walking through the Executive Office Building, there were troops sitting down in the hallway prepared in the event that they were needed. That was the environment. Without making a value judgment about who was right or who was wrong, that’s what was going on in this country. You have to have armed troops in the Executive Office Building, potentially to deal with violent demonstrators who might try to attack, and these are Americans. It was quite a time.

If you didn’t experience it back then, you would have no idea how close we were, as a country, to revolution. It was a very violent time, a very divisive time. And I think people on both sides will say that.

LAUREE MOSS (peace protester from Detroit): It was early dawn and those of us who were there were people who had driven all night long. People were just milling around and waiting for the march to begin. That’s when we saw a big black limousine pull up. Then we see the president walk up the stairs to the top of the Lincoln Memorial, and then all of a sudden people mill around him. It was quite shocking, because he looked exhausted, greasy. His face was strained.

BUD KROGH: When we got there, there were not a lot of people around. It was dark, but you could see clusters of young people. There were people that had come from all over the eastern part of the country to join in this demonstration. You could see them along the Mall. The president was up at the top of the stairs of the Lincoln Memorial, right inside the first set of columns… I don’t remember, specifically, what he said about his Quaker background, but he was explaining that he had come out of a pacifist tradition. One young person said, “You know, we’re prepared to die for what we believe in.” And he said he understood that, and what he was trying to do was to make the kind of decisions so that no one would have to die for their country. He was trying to reach out, and I could tell that they could not believe that he was there. It was almost like a stunned silence.

RICHARD REEVES (Nixon biographer): I think that Nixon thought he had a message to tell these kids. In his own odd way, whether he had Asperger’s or whatever, he thought he could connect with them. He tried, and it was a brave thing to do, too.

BUD KROGH: When the kids were killed at Kent State that was devastating to so many of us because it was so unnecessary. I think that the president had to have felt some grief about that, realizing that his decision to go into Cambodia had triggered these demonstrations at the universities, and that that decision did lead to these direct confrontations. When he was out there talking to these kids—you had a sense of just needing to reach out and let them know what he was feeling.

LAUREE MOSS: I went back down to the bottom of the memorial steps and told my friend, nothing’s going on up there, it’s ridiculous. We’re talking, and all of a sudden, we see our friend Bob Moustakas, who has been taking pictures with his Leica the whole time, talking to the president. Nixon asked Bob, “What are you doing here?” Bob said, “Oh, we came for the demonstration.” Then he asked Bob, “Well, who are you with?” And Bob points to us. So then they both walked down to us, and the president is now approaching me, introducing himself to me and my friend, and Bob is taking pictures of us. The president asked, “How old are you?” I said twenty-two. “Oh, you’re the same age as my daughter, Patricia. Oh, how great is that? Are you in college?” I told him that I graduated from Michigan undergrad and went to graduate school at Wayne State in Detroit and that I’m a social worker. Then I said, “What happened? How come you invaded Cambodia? How come you allowed those kids to be killed?” And he goes, “I’m not here to talk politics. I’m here to be with you in sympathy.” He was trying to avoid conversation of anything political. He said he was just joining us in our grief at what happened to the students at Kent State. I smelled alcohol on his breath. I’m very sensitive to that. 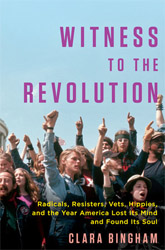 From Witness to the Revolution: Radicals, Resisters, Vets, Hippies, and the Year America Lost Its Mind and Found Its Soul. Used with permission of Random House. Copyright © 2016 by Clara Bingham.

Clara Bingham is the author, most recently, of Witness to the Revolution: Radicals, Resisters, Vets, Hippies, and The Year America Lost its Mind and Found its Soul (Random House 2016). 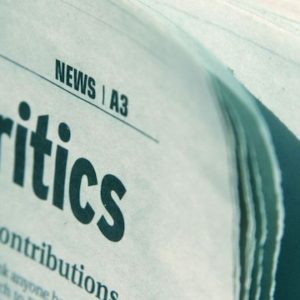 Every once in a while, a critic will feel it necessary to define what they think of as their role in the larger literary...
© LitHub
Back to top
Loading Comments...