Writing About the Art of Writing is an Art Unto Itself

Every once in a while, a critic will feel it necessary to define what they think of as their role in the larger literary community. These often take the form of prefaces or introductions to collections of essays and criticism—the feeling is one of almost embarrassed justification, as if without a wholly developed philosophy on the vitality of criticism a book filled with such work would be considered superfluous or even in bad taste. In other cases, these declarations appear as manifestos, screeds, or present themselves as re-evaluations in changing times. Or—in the cases of, say, Samuel Johnson or Edmund Wilson or Northrop Frye—myriad defenses for the utility of literary criticism pervade so much of their work that in some sense their whole catalogues function as insistent rationalizations for their own continued existence.

Now as a critic I love these essays; I get a kick out of seeing how others define what it is that I do. Moreover, many of these writers have brought brilliant insights into what can often be a dismissed vocation. But while I appreciate the efforts of my fellow critics, there is one aspect to nearly all of these defenses that I disagree with, deeply, and that is the implication that criticism is separate from the literature it describes, as if novelists, poets, playwrights, and nonfiction writers were the players in the game and we critics merely the referees. What’s intimated in many defenses of criticism is this gap between observer and observed, between artist and non-artist.

This is bullshit. Criticism is also literature. Now, by that I do not mean that criticism is both outside and inside of literature. No, no, no. The word “also” there insists on criticism’s inclusion as a genre of literature, and not as a subject that stands outside of it. When viewed as a separate entity, criticism becomes this Big Brother-like authority ready to pop up and take down any unsuspecting artist; it turns criticism into a practical evil that published authors must suffer through; and it devalues the work of those who became critics because they love literature and they love to write.

Because isn’t this the obvious thing being ignored all the time? That critics are, indeed, writers, too? That they wouldn’t be publishing and working if they couldn’t write? And, even more than that, write very well? It takes a lot of dedication and discipline to become a good writer, no matter what type of writing you engage in. To develop the communicative skills necessary to produce even the most mundane and banal review still requires many years of reading and writing—and not just in regular doses either, but more like reading hundreds of books and writing thousands of pages. The eloquent and artful construction of sentences takes so much effort to learn and to learn well that any dismissal of critics as (somehow) purely functionary referees or as descriptive commentators or as gatekeepers to the public’s purchases seems not only wrong but completely irrelevant to what’s actually going on.

Critics have read the same books you have. They’ve gone to the same schools and grew up in the same cities. They love reading with the same fervor and nuttiness as anyone. They believe in the importance of books and the beauty of literary creation. They chose writing because, like any novelist or poet, it is all they want to do, and anything else would be a compromise, a defeat. Critics have struggled to develop their voices and dealt with the same humbling critiques of their work that they offer to others. They are—if my point’s not hitting home—just like the people they write about. In fact they are so similar that the gap between critic and non-writer is much more substantial than that between critic and artist.

By shoving critics out of literature we’re deliberately excluding an entire group of people who are on the side of books. They are not enemies, no matter how painful or seemingly malicious their words can be. Yes, a critic’s work is necessarily reactionary—inasmuch as there usually is some work that prompts the writing—but isn’t this true of all writers? Can’t most novels and poems and plays be considered, at least in some way, reactions to other work? Even if the connection is precarious and illusory, it still seems apt to say that art carries with it its own criticisms, even if those criticisms don’t explicitly name the texts to which they are responding.

This, I think, speaks to why people often buy into this separation: because art is artful, and criticism is critical. That seems rudimentary, but what I mean is that a novel, for instance, will not state its thematic concerns baldly for the reader. The enterprise of reading fiction demands interpretation, and for many people what makes art ART is this very quality: that there is a surface, with all its practical details and ostensible concerns, and then there is what’s underneath, the real meat of a novel. Criticism, on the other hand, is often direct and unambiguous about its intentions and its meanings. It doesn’t—usually—obfuscate or take a demure, oblique approach; it declares, it states, it tells. And so because the experience of reading criticism is often one of informative learning and literary elucidation, it seems odd to call that art when art for the longest time has been principally characterized by its thematic and philosophic elusiveness. How can something be art if it doesn’t involve some kind of process of understanding?

I’ll tell you: because art is not always artful, at least not in the conventionally accepted sense. Our working definitions of art are, to me, woefully reductive and dangerously exclusive. Somehow, something like criticism is simultaneously dismissed as discrete (and thus irrelevant) and promoted as distinct (and thus able to judge from a fuller, more dispassionate point of view). People will casually refer to “the critics” and make some weird comment about their collective ineptitude or their incorrect focus or their lack of appreciation for beauty or experiment or originality. And yet what author wouldn’t love for there to be a person who writes lovingly and accurately about what they’d spend years completing? Why can’t critics be thought of as partners, as co-conspirators, in a world where books aren’t exactly the toast of the proverbial town? If literature is truly becoming a more and more niche community, it seems shameful to exclude a group of people who love it as much as the rest of them.

A critic is an artist; I am an artist. I write because I love language and because I love using language to depict the various complexities of my life. Some people use their family and friends as inspiration, while others mine history for theirs. Still others find muses in the calm of nature, some in the chaos of the city. I’ve found it in books—it is through them that I’m able to express not merely what I think of literature, but what I believe about life. I’m not sure why books became that vehicle for me, but understanding why has never been requisite for art making. Rather it is the fundamental mystery of art that makes it so compelling. So I have no clue why criticism suits me so well, and why I love writing it every single day. But I would never ask a poet to explain her love for poetry, or a novelist her love for fiction—and I ask you not to ask this of critics. We love like everyone loves: enigmatically, intuitively, and, most importantly, with every ounce of our being.

When America Was On the Brink of a Second Revolution 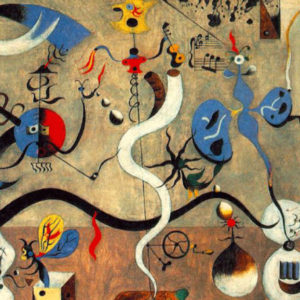 The following essay appears in the new issue of The Lifted Brow. I. "To try and read strange writing, signifies that you will...
© LitHub
Back to top