“I remember telling people that I was writing a book, and they either looked at me like I was crazy or told me they thought it was ‘cute.’ But people thinking I can’t do something only makes me want to do it more,” Adriana Mather writes to me over email. Even her condensed responses to my questions are poised and full of self-realization; they remind me of when I first met her a three years ago: before the book agent and subsequent book deal, before, even, the storyline was fleshed out. What was there was her can-do spirit.

Mather is the author of the newly published Young Adult novel How to Hang a Witch, out last week from Knopf Books for Young Readers. The novel, written from the perspective of Samantha Mather, the contagiously alert yet sensible protagonist, tells the story of Samantha’s move from New York to Salem, Massachusetts, where she lives with her stepmother after her father has slipped into a coma. The house they inhabit is her grandmother’s old house, and its history is concurrent with Salem’s haunted past, one of witches and superstition and heresy. This is not due to its merely being located in Salem, but because Samantha is a direct descendant of Cotton Mather, who is regarded as having “begun” the Salem Witch Trials centuries ago. Salem, as it turns out, holds on to this bit of history, and Samantha, upon enrolling in school there, finds herself at mercy of The Descendants, pseudo-goth kids who dress in black and claim to be descendants of Salem’s persecuted witches. What follows are ghosts both metaphoric and real: Salem’s history coming to life in the form of a ghost, Elijah, and the more tangible presence of Jaxon, Samantha’s amiable neighbor. And as people start dying in Salem, believed to have been incited by Samantha’s presence, she’ll need to team up with her friends and jealous enemies to figure out what exactly is going on.

Samantha Mather is author Adriana Mather’s self-creation: a projection of her insecurities, curiosity, and—above all—lurid family history. It’s the latter that comes up again and again in fiction and life, and it’s so often what gives writers their inspiration; in this case, it’s what gives Mather (the author) her purpose.

Mather’s ancestors, respectively, came over on the Mayflower, instigated the Salem Witch Trials, lived in Sleepy Hollow, and survived the sinking of the Titanic. They have experienced everything from failed inventions to the first American-born presidency at Harvard. So, when you write a character who hails from the controversy that is Cotton Mather, your best bet is to try and rejumble the picture, right?

“The story isn’t actually about rewriting history, but about growing after 300 years,” Mather responds. “My hope is that people look at the historical lessons and stop making the same mistakes. The painful part about writing this wasn’t the history, but the research on modern day bullying. My heart broke.”

No one who reads her book could blame her. While the historical accuracy (and sometimes lack thereof) is a central premise, it’s at times the shy cousin to the book’s treatment of The Descendants’ bullying of Samantha, and, consequently, Samantha’s icy redemption. The students in this book are prone to backhanded comments, fierce censure, stone-cold insults, and personal vendettas against their peers and teachers. Yes, just like in high school. But Mather’s decision to write this as a YA novel speaks to the rapid nature of their occurrences: Samantha’s inner monologue is such that you can’t escape it and her tone is often crushed, vulnerable. Her only reprieve, seemingly, is Jaxon, who is the calm to Salem’s storm, a dynamic character who provides the history to the nuances of the town, details Samantha can’t glean from her own projections or the handwritten family letters she discovers in her drafty house, which provide keys to her family history.

Samantha’s attempt to uncover history in a short amount of narrative time (with the help of Jaxon, Elijah, and personal letters) while dealing with the backlash that comes with being a Mather in a town keen on holding grudges, enables the characters of this book—personal or secondary—to take on dialed-up characteristics: Sure, tropes if you want to call them that, but maybe, more realistically, a simpler (a younger) way of seeing the world.

Mather, who is also an actor and film producer, most recently the star and producer of the independent film Honeyglue, says acting has influenced her way of writing approachable, realistic characters. “While studying acting I formed the theory that the palette of a personality is universal and it looks like a soundboard,” she says. “Everyone has the same levers and attributes, only some are turned up and others turned down. I’m not saying I’m right, only that that’s the way I conceptualize it. The looking inward I did with Sam was less about me and more about how to build a funny, strong female character who was a force to be reckoned with.”

How to Hang a Witch is dialogue-heavy, plot-driven (especially in regard to its mystery genre components), and reliant upon placing characters in situations where their reactions inform who they are; basically, it has all the trademarks of a movie, and Mather’s training. In addition to “playing” the scenes in her head as she wrote them, she did a ton of research in Salem herself, imparting that “history is woven into the very fabric of the culture [in Salem] in a way I’ve never seen before. It’s full of tales of historical curses, mysterious murders, and unexplainable happenings. It makes you believe that magic is real.”

No wonder Mather’s self-transformation from actor to writer to history lover who’s embracing her family history seems so natural. Not only was it fun for her, but it was her. She did say that in researching the book, she was met with some eyebrow-raising when she mentioned her name, and was told by one person in no uncertain terms that her name is unpopular in Salem. But, more fodder, it seems, is good for a first-time writer, especially one who has a specific purpose in mind. Mather writes to me with candor and wittiness: “I don’t believe in adults. They’re the stuff of fairytales and nightmares.”

Matthew Daddona is a writer and editor based in New York. His most recent writings have appeared in Fast Company, Outside, Guernica, and Tin House.

We're All Peripheral: On the Uncertainty of Literary Community 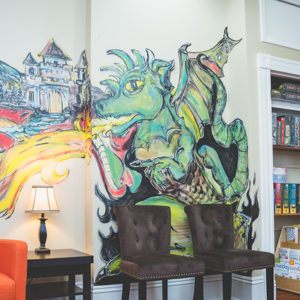 All photos by Sean Spansel. Self-proclaimed nerd Candice Huber opened Tubby & Coo's on September 1, 2014. It is the only...
© LitHub
Back to top