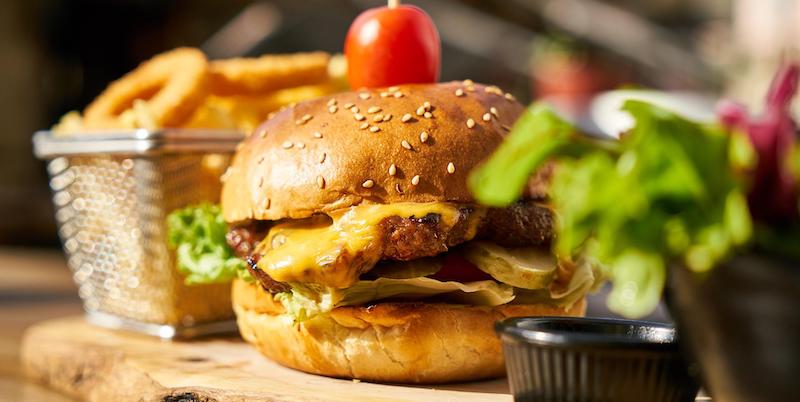 David R. Montgomery and Anne Biklé on the Evolving Science Around What We Eat

We all know it, think we know it, or have heard it for sure: fat is bad. But the notion that we can tar all fats with a negative brush belies what they do inside our bodies. Fats direct and guide critical aspects of mammalian biology, activating or suppressing genes that govern metabolism and immunity. They can influence whether we are happy or sad, thinking clearly or wading through mental fog. And in terms of the fats in meat and dairy, it matters what the animals in the human diet consume—​for what they eat, we become.

Although our ancestors ate animals long before modern humans evolved, it was only in the twentieth century that animal fats acquired a bad reputation. This image solidified in the 1950s when a famously self-​confident American physiologist noted that an unusual number of healthy, middle-​aged men were dropping dead from heart attacks. He pinned blame on saturated animal fats, an idea that remains enshrined in popular wisdom.

After the Second World War, Ancel Keys built a reputation by making the case that consuming animal fats, and cholesterol in particular, caused heart attacks. He didn’t set out to do this. It’s where the data available at the time focused his view.

Keys made a name for himself conducting studies on food deprivation that helped guide efforts to nourish European populations suffering from wartime food shortages. When the newly formed United Nations Food and Agriculture Organization began working to address global hunger, they recruited Keys to chair prestigious committees on calorie requirements and nutrition.

Serving in this capacity, he learned that Italian men suffered fewer heart attacks than their American counterparts. Intrigued, he compared death rates from heart disease for middle-​aged men in six countries and found a strong correlation with the overall proportion of fat in their diet. The more fat that men ate, the more of them died from heart disease. In writing up his findings, Keys made the point that deaths from heart disease declined in Nazi-​occupied Norway when dietary fats were scarce. He thought saturated fat consumption led to heart disease and invoked cholesterol as the connection.

Fats, however, remain one of the least settled topics, with pitched battles still raging over how much and what types Americans should eat.

But in doing so, Keys overlooked how other dietary factors also varied between the countries in his comparison. Notably, those with the highest rates of heart attacks and fat consumption—​the United States, Canada, and Australia—​also consumed the most sugar and omega-​6-​rich seed oils.

The two countries with the lowest fat consumption and rates of heart attack were Japan and Italy. Diets in these countries were low in omega-​6s but high in other fats. The fish-​centric Japanese diet delivered a lot of omega-​3s, and Italians ate impressive amounts of olive oil rich in unsaturated omega-​9s. Keys didn’t much consider these factors once his attention locked on cholesterol as the big fat problem in the American diet.

Doctors at the time thought high levels of it caused heart attacks. But in zeroing in on saturated animal fats as the culprit, his hypothesized connection didn’t capture the whole story. The mix and levels of unsaturated fats also matter to health. Some are better for us than others.

Keys’s authoritative opinions about animal fats serendipitously aligned with other interests. Half a century before, in 1910, soapmaker Procter and Gamble patented a new product made from agricultural waste. This feat of genius transformed trash into a food product. In an agroindustrial version of recycling, they turned oil squeezed from the seeds left after harvesting fluffy, high-​value cotton into an artificial edible fat (hydrogenated vegetable oil). At first people were suspicious of the newfangled stuff called Crisco. Cooks had always used animal fats like lard or butter. But the company mounted an aggressive decades-​long promotional effort giving away cookbooks featuring their new fat as a key ingredient.

Crisco wasn’t the only manufactured fat made from plants to hit our bodies. Shortages of animal fats during the Depression and butter during the Second World War led to another new hydrogenated vegetable oil product—​margarine. Initially shaded an unappetizing pale white, producers soon found that dying it buttery yellow greatly increased consumer appeal. The balance of fats in the American diet shifted as omega-​6-​rich margarine made from processing seed oils replaced omega-​3-​rich butter and animal-​derived saturated fats. While large food companies pumped more omega-​6s into our diet, Keys kept focusing on cholesterol and saturated fats.

He went on to develop the Seven Countries Study, an investigation of heart disease among almost 13,000 men between 40 and 60 years old in the United States, Finland, Greece, Italy, Japan, Netherlands, and Yugoslavia. The largest epidemiological study of its time, it began in 1958 and soon reported that greater saturated fat intake was associated with a higher rate of death due to heart disease.

Keys believed he had uncovered the smoking gun for why so many American men had been dying from heart attacks. He called his idea the “diet-​heart hypothesis,” claiming that the saturated fats in butter, meat, and other animal foods raised blood cholesterol levels and thereby caused heart attacks. In 1961, Time put him on the cover, proclaiming him person of the year.

Yet the causal link Keys endorsed—​cholesterol leads to heart attacks—​was not the full story. Looking back, it can seem he reflexively dismissed any thought that animal fats might benefit us. But the analytic tools available in his day were just as culpable. Cholesterol happened to be easily detected and measured in blood samples, so Keys looked at what was illuminated under the intellectual lamppost of his field of study.

Like many influential scientists promoting their own ideas, Keys challenged, sidelined, and overshadowed those who questioned his thinking or brought up results and evidence that didn’t fit his hypothesis. Shortly after the initial Seven Countries Study was published, two randomized clinical trials that contradicted the diet-​heart hypothesis quietly lapsed into obscurity, languishing unpublished until rediscovered decades later.

One, the Sydney Diet Heart Study, took place from 1966 to 1973 and followed several hundred middle-​aged men who had recently had heart attacks and found that replacing saturated fats with omega-​6-​rich vegetable oils lowered cholesterol but increased risk of death from subsequent heart attacks. This didn’t square with how the diet-​heart hypothesis supposedly worked.

Advice gets fashioned between the self-​correcting blackboard of science, the shifting winds of politics, and commercial interests working to skew things their own way.

Neither did the Minnesota Coronary Experiment, which ran from 1968 to 1973 and replaced dietary animal fats with omega-​6-​rich vegetable oil in a randomized cohort of over 9,000 men and women. The group that received vegetable oils had lower cholesterol levels but a higher risk of death from heart disease. Unphased, the diet-​heart hypothesis zombied on, forming the basis for dietary recommendations that Americans replace saturated (animal) fats with polyunsaturated fats.

In practice this meant that through the closing decades of the twentieth century, omega-​6-​rich seed oils became embedded in the wide array of processed foods taking over the American diet—​and those who ate them.

The story on dietary fat has evolved considerably since Keys’s day. Recent research on how fats influence health points beyond specific types of fat to the importance of their overall mix and balance. Yet dietary advice has been slow to recognize more nuanced and complex roles of fats in human health. Indeed, the first ever U.S. Dietary Guidelines, issued in 1980, endorsed replacing animal fats with vegetable oils, enshrining a legacy that continues to muddle how we think about fats and what we eat.

Other initially controversial topics in the guidelines, like carbohydrate consumption, are more or less resolved: when possible, we should eat them in whole rather than refined forms. Fats, however, remain one of the least settled topics, with pitched battles still raging over how much and what types Americans should eat. In great part this reflects how such advice gets fashioned between the self-​correcting blackboard of science, the shifting winds of politics, and commercial interests working to skew things their own way.

Through all the squabbling over fats, little mention was made of their changing mix in the diet of farm animals, leaving Americans to live with the consequences of this unrecognized experiment. Instead, the simplistic Orwellian characterization stuck—​saturated fats bad, unsaturated fats good. Keys and others didn’t fully understand that a balance of omega-​6 and omega-​3 fats helps orchestrate the human immune system’s essential process of inflammation to deliver not too much or too little, but just enough at just the right times. Nor, for that matter, did they understand that this required a balance of fats in our food.

Consider that linoleic acid, the basic omega-​6 dominant in ruminants that eat a grain- and concentrate-​rich diet, is the precursor for a longer-​chain omega-​6 fat, arachidonic acid (ARA). This omega-​6 plays several roles, including a really critical one—​helping initiate inflammation. The typical American diet today contains 10 to over 20 times more omega-​6s than omega-​3s. This is roughly 3 to 5 times higher than what is considered beneficial for human health.

Our bodies generally have no problem firing up inflammation. It’s failing to turn it off that gets us in trouble. With omega-​6 fats swamping their omega-​3 cousins over the past half century in the American diet, is it a coincidence that inflammation gone awry is a major factor in maladies linked to excessive inflammation, including heart disease and cancer, which top the list of leading causes of death in the United States?

Consider too that a number of debilitating neurodegenerative, reproductive, and metabolic ailments afflicting an awful lot of Americans are rooted in excessive inflammation. Viewed in this light, reducing the ratio of omega-​6s to omega-​3s in the Western diet may be an important dietary change to help stem the ongoing rise in inflammation-​related chronic diseases. 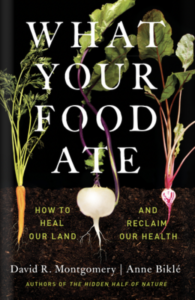 Excerpted from What Your Food Ate: How to Heal Our Land and Reclaim Our Health by David R. Montgomery and Anne Biklé, published by W. W. Norton & Company.

David R. Montgomery is a professor at the University of Washington, a MacArthur Fellow, a finalist for the PEN/E.O. Wilson Literary Science Writing Award, and an internationally recognized authority on geomorphology. His books have been translated into ten languages. He lives with his wife, Anne Biklé, in Seattle. Their work includes What Your Food Ate: How to Heal Our Land and Reclaim Our Health, and a trilogy of books about soil health, microbiomes, and farming--Dirt: The Erosion of Civilizations, The Hidden Half of Nature, and Growing a Revolution.

Anne Biklé is a biologist and environmental planner whose writing has appeared in Nautilus, Natural History, Smithsonian, Fine Gardening, and Best Health. She lives with her husband, David R. Montgomery, in Seattle. Their work includes What Your Food Ate: How to Heal Our Land and Reclaim Our Health, and a trilogy of books about soil health, microbiomes, and farming--Dirt: The Erosion of Civilizations, The Hidden Half of Nature, and Growing a Revolution.

After Two Pregnancy Losses, I Wrote the Book I Needed to Read 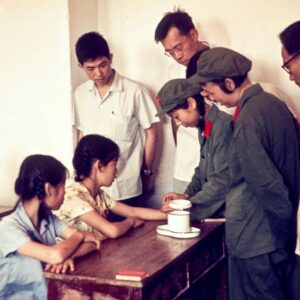 In my first year of high school, I flunked my English class. My mom was not someone I’d go for a consolation hug, or for forgiveness...
© LitHub
Back to top
Loading Comments...