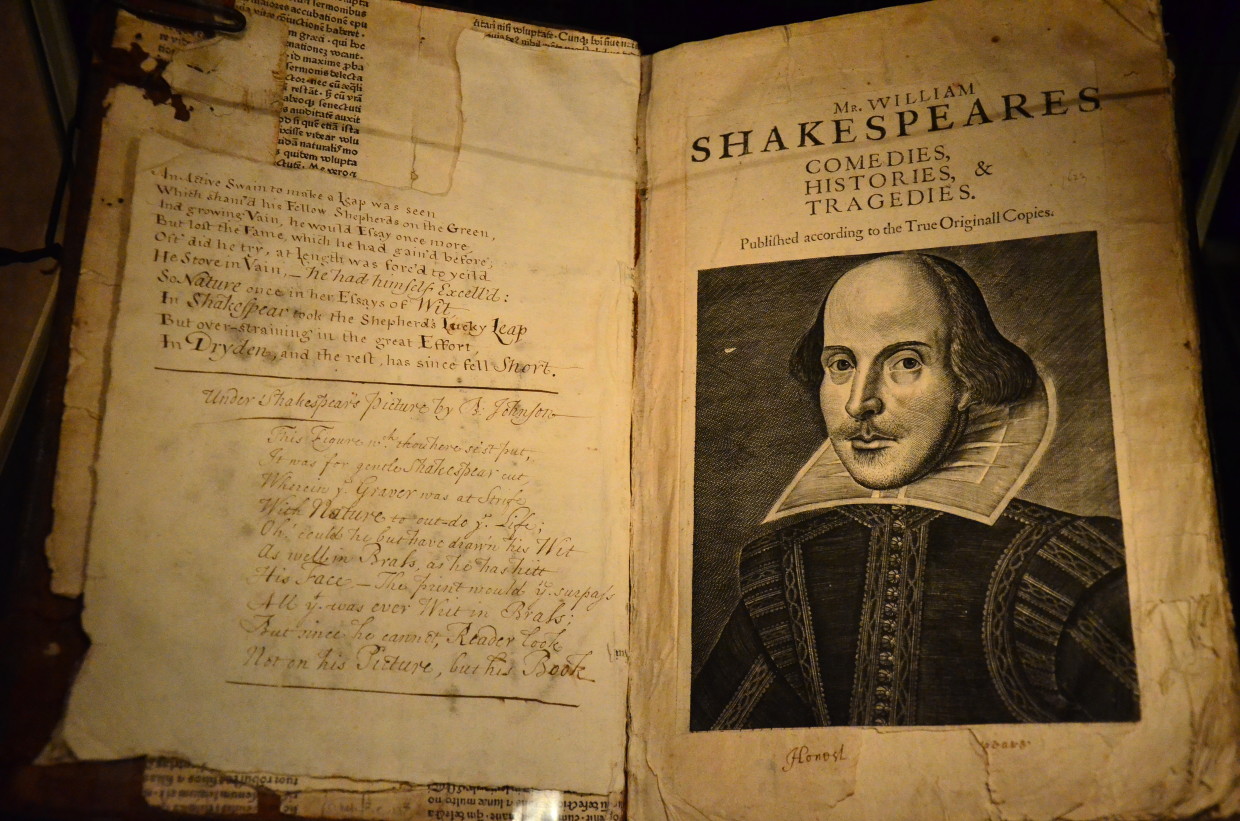 What Was Shakespeare’s Central Philosophy?

Towards the conclusion of The Tempest, Prospero famously says, “We are such stuff / As dreams are made on; and our little life is rounded with a sleep.” This sentiment—that our lives are somehow illusory, and that fiction and reality are closely intertwined—could be said to constitute William Shakespeare’s central philosophy. As Colin McGinn, author of Shakespeare and Philosophy puts it, “skepticism is Shakespeare’s main theme,” for “the possibility of error about people and the world… in its many forms” is one of the consistent subjects of his plays. Shakespeare’s work presents life, like theater, as fundamentally a fiction, and the task of the individual as living in light of that realization.

Shakespeare, of course, was not a professional philosopher; his first duty was always to the construction of artifice. And yet in 1817, William Hazlitt claimed that Shakespeare “was as good a philosopher as he was a poet.” Perhaps it behooves us, especially on the 400th anniversary of his death, to reflect on the ways that our most singular and all-encompassing author consistently conveyed his particular philosophical perspective.

The question of the gulf between appearances and reality is arguably the central project of metaphysics. It motivated Kant, Descartes, Berkeley, Hume, the great pre-Socratic philosophers like Parmenides, Pythagoras, and Plato, for whom, to quote Alfred North Whitehead, “all of western philosophy is but a footnote.” If this is true, then Shakespeare wrote some of the most illuminating commentary (and critique) in that collection of annotations. Shakespeare has Imogene in Cymbeline take part in a moment of dark, ironic Platonism when, upon waking next to a decapitated corpse she remarks, “I hope I dream’ / For so I thought I was a cave-keeper.” In her own literal—and perhaps Platonic—cave she mutters, “’Twas but a bolt of nothing, shot at nothing, / Which the brain makes of fumes: our very eyes / Are sometimes like our judgments, blind.”

The sentiment would not be out of place in The Republic. In his Allegory of the Cave, the philosopher famously compared our reality to shadows on a wall. But there is a problem for any artist who wishes to express this view, for if the world of human experience is simply an artifice, what does that make a work of art? Plato and Shakespeare are in some sense in agreement that literature is a system of lies, but where the Greek believed there to be “an ancient quarrel between philosophy and poetry,” Shakespeare approached questions of artifice, reality, illusion, experience, and fiction across his 36 plays to dramatize this fundamental paradox of life and its representation.

Writing about the hallucinatory world of A Midsummer Night’s Dream with its “rude mechanicals” and its gossamer sensibility, McGinn observes that the play “is all about the difficulty of distinguishing dreaming from wakefulness, illusion from reality, what is merely imagined from what is veridically perceived.” This theme assumes central importance across several of Shakespeare’s works, from the ambiguous ghost in Hamlet to the statue of Hermione at the conclusion of A Winter’s Tale and the enchanted Forest of Arden in As You Like it (whose very title could grant a degree of relativism). In that last play, Jacques declares, “All the world’s a stage, / And all the men and women merely players.” We can read this as commentary on the social roles we assume, but we can also interpret it more radically. As A.D. Nuttall puts it in his indispensible Shakespeare the Thinker, “An incipient Platonism is at work within the dramaturgical art.”

Yet this is a Platonism that is combined with a particular skepticism (very much in the air at the time of composition). As Macbeth memorably utters, “Life’s but a walking shadow, a poor player / That struts and frets his hour upon the stage / And then is heard no more.” If Plato worried that literature was but a pale imitation of life, which was in turn but a pale imitation of the world of the Forms, then for Shakespeare the center is even less assured. It is not that theater is similar to our lives, but rather that our lives are similar to theater. There is the rub, for if, as Macbeth says, our lives’ drama signifies nothing, then we the actors have the ability to endow our performances with meaning, even if they mean nothing in and of themselves.

Shakespeare turns Plato’s denunciations of art and poetics on their head to argue that fictional narratives are somehow more true than reality, or, as McGinn writes, “fiction has greater longevity than material things, since Shakespeare’s plays, say, will last longer than any building erected in his time; immortality belongs, if anywhere, to the characters of fiction, not those of real life.” This is the central argument of “Shakespearean Metaphysics,” though the concept originates not with the playwright, even if he provides its fullest dramatic encapsulation. A few decades before the height of Shakespeare’s career, the greatest Elizabethan literary critic Philip Sidney claimed something similar when he wrote, “Now for the poet, he nothing affirms, and therefore never lies.”

The presence of this sort of sentiment in an Elizabethan critic’s writings is not historically surprising, and it should be kept in mind, lest one take it as my argument that this particular perspective was unique to Shakespeare. Renaissance England was home to a diversity of philosophical positions that are reflected not just in the Bard’s plays, but also throughout the literature of the period. Continental Neoplatonism, which was central to the continental humanist project, developed its own domestic flavors in the form of the Cambridge Neoplatonists, and a certain bemused skepticism celebrated in writers like Montaigne (who Shakespeare would have read in John Florio’s translation) were widely explored by authors. Questions of reality, illusion, truth, and artifice were common in not just the culture, but in the popular theater as well. Shakespeare’s contribution to this tradition remains the most culturally enduring.

Antonio says in The Merchant of Venice, “I hold the world but as the world… A stage where every man must play a part.” This is, of course, a metaphor, but it’s a potent one, and one that demonstrates Shakespeare’s investment in the theme of dreams vs. reality, which is expressed more literally in plays like The Tempest. This is, in part, the origin of Shakespeare’s exceptionality. As McGinn explains, Shakespeare was “original in seeing that skepticism is part of life, not just an abstract philosopher’s question” and that this is especially true “concerning other minds.”

For all of the author’s diversity in narrative subject, it is remarkable how consistently he engages with an argument for the illusory nature of observed reality. In that same monologue quoted earlier, Prospero breaks the fourth wall, saying “These our actors, / As I foretold you, were all spirits and / Are melted into air, into thin air.” Drawing attention to the possibly literal location of the play’s performance, the Duke of Milan says that “the great globe itself… shall dissolve” once the enchanted trickery of the drama has ended. Of course, the “great globe” could refer to the world itself.

Shakespeare’s metaphysics echo Picasso’s, who claimed that “art is a lie that reveals the truth.” But for Shakespeare, life itself is a type of lie. The playwright’s Ars Poetica is not just his demonstration of the deep artifice of our reality, but also of his own talent to construct such deeply affecting and powerful fictions that are, nonetheless, fictional. His 36 plays capture the range of human experience and personalities; that Shakespeare constructs these brave new worlds with words alone is a trick worthy of his Prospero. The very existence of his plays serves as the conclusion of his argument about fiction and reality.

Ed Simon is the associate editor of the Marginalia Review of Books, a channel of The Los Angeles Review of Books. He hold a PhD in English from Lehigh University, and is a frequent contributor at several different sites.
http://edsimon.org

In Praise of Remixing Shakespeare 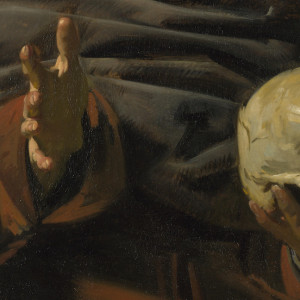 Spanglish is a major linguistic force in the United States. Of the close to 60 million Latinos—the largest, fastest-growing...
© LitHub
Back to top