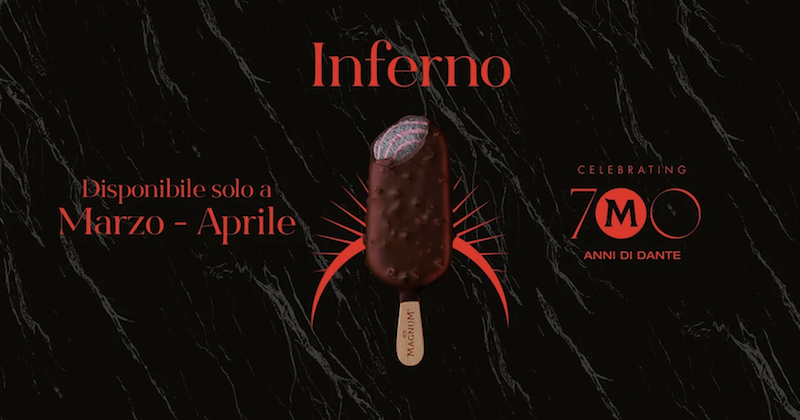 What the fresh hell? Magnum is releasing a Dante-themed ice cream bar.

Is this the dark woods or the shining world? The ice cream company Magnum, in partnership with the Dante Alighieri Society, is releasing a new series of ice cream bars to commemorate the 700th anniversary of Dante Alighieri’s death.

Three flavors of Dante-themed ice cream bars are being released over the next few months, one for each canticle of the Divine Comedy. Magnum Inferno, already on the market, is a charcoal ice cream with raspberry and salted dark chocolate. The Inferno bar will be followed by Magnum Purgatorio (caramel and vanilla with biscotti, released in May) and Magnum Paradiso (pink chocolate and pistachio, released in July).

The staggered rollout means that, like Dante, we’ll journey through Hell, then Purgatory, then finally experience the Love which moves the sun and the other stars . . . the divine love of Magnum ice cream. But for now, Magnum is going all in on promotion for Inferno—which is easy for an ice cream company whose tagline is “True to pleasure.” Reads the Magnum website, “Give into temptation: Magnum Inferno awaits you.” And the Inferno might not be too bad for hardcore ice cream enthusiasts: punishment for gluttons is lying down in freezing, icy slush (“large hail, discolour’d water, sleety flaw”). Please don’t throw me in the deliciously cool briar patch!

Unfortunately, Magnum Inferno is being distributed exclusively in Italy, so you might have to do some traveling—like the commemorated author—if you want to eat ice cream that makes you feel like this: