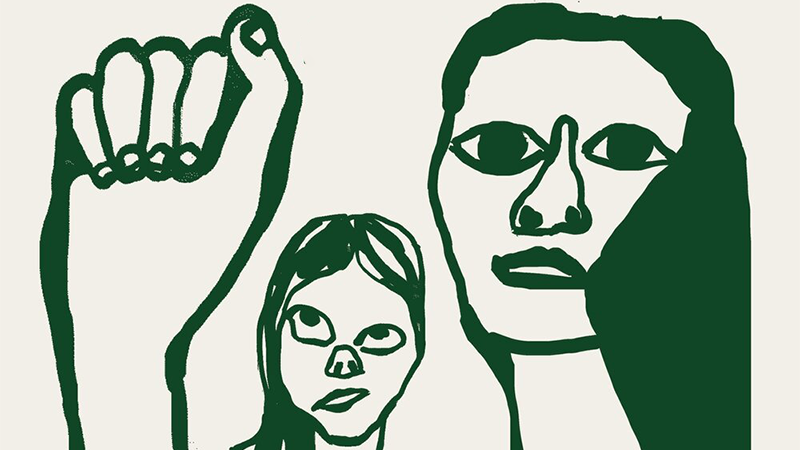 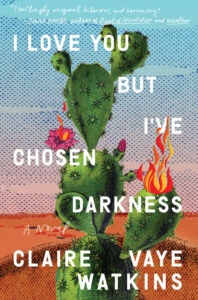 “The immediacy of the first-person voice, notable even in the title, suggests we may be reading a memoir. So does the narrator’s name, which, as it happens, is Claire Vaye Watkins … But this is indeed a novel, and it’s an intense, intelligent and bristly one … I Love You but I’ve Chosen Darkness can be difficult to track; characters appear without backgrounds, prose unfolds as poetry, material is quoted at length from the author’s father’s 1979 memoir, My Life With Charles Manson, as well as from the narrator’s mother’s letters to a cousin … This novel’s sweaty urgency, its ambitious disruption of form and content, makes it tough to criticize … A slice of her mother’s back story is told through sets of letters so dull only a daughter could love them … But most prose wouldn’t stand up against the narrator’s breakneck pace, frightening honesty and biting, self-deprecating humor … As Watkins writes, in a virtuoso performance of a chapter titled ‘How I Like It,’ ‘I am not choosing darkness, but darkness is choosing me.’ Maybe, but by nourishing her complicated desires, she holds on. Perceptive and shameless.”

“There’s a reason Ted Lasso swept the Emmys this year. After an exceptionally exhausting two years that felt more like two decades, people need to laugh and be reminded of what’s worth fighting for … I was reminded of this while reading Fight Night, the latest novel by Miriam Toews, which can veer from endearing to obvious to moving in a single chapter. On the whole, it’s a touching tribute to the matrilineal bond among three women of different generations … Darkness lurks in Fight Night too. But where Jansson’s story was leavened by vivid writing on the natural world, Toews’ is buoyed by a grandmother’s defiant sense of humor … Toews’ greatest talent lies in creating messy and lovable characters — the kind of people you’d want on your team (or coaching your team) if you were in a fight. Not because they are the strongest, but because somewhere inside themselves they’ve found the energy to keep moving forward.”

“This novel, like Dear Cyborgs, addresses questions around living and thinking in relation to one another, mediated through the internet. And one of the practical results of these questions is a cascade of framing devices … Luckily, the effect of these shifting perspectives focuses less on voice than on being multi-vocal, and creating a sense of polyphony. By the end of the novel, any narrative corresponding to one singular voice is subsumed within a general thread of conversation that’s carried along through each section … This novel is very funny. It has a quick wit that comes on barrel-chested, deriding at times poetry, the neo-liberal consensus, and various pop culture ephemera … And this spirit of good-natured humor allows Lim a half-serious, aw shucks, earnestness in exchanges … For Lim, conversation with an urge to communicate is the wrinkle that persists through increasingly stratified systems of organization and communication. He finds moments of lyricism that say everything in the world without saying anything in particular … Search History is a living, breathing novel. Its fascinations and enthusiasms are important yet ambivalent … An Ode to Joy in Autotune.” 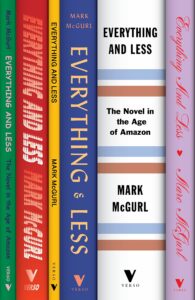 “Mark McGurl’s new book, Everything and Less: The Novel in the Age of Amazon, makes the argument not only that books are at the company’s root, but that Amazon itself is a form of literature, an epic narrative of domination that subsumes all of its users as bit characters … Rather than arguing that Amazon is destroying literature, or devaluing the artistic act, he attempts to figure out what the house style of the Amazon Era actually is—a style that the author almost perversely enjoys over the course of the book, as part anthropologist and part fan … McGurl holds Amazon-style digital platforms and their effects to the same scrutiny as MFA programs … Amazon, with its public rankings, star ratings, and review counts, makes it impossible to think of literature as existing outside of a marketplace of money and attention. (Every new book seems to float temporarily to the top bestseller slot of one or another of Amazon’s niche genres, which the author proudly posts on Twitter.) … In Everything and Less, Amazon aesthetics are not a deliberate program, but a secondary effect of commerce, the result of much larger processes of efficiency and profit maximization … McGurl is on firm ground when he is analyzing the mass-market literature created and discovered on KDP, the genre-fiction e-books that are eating into the traditional market for Danielle Steel or Tom Clancy … consumers might find in McGurl’s book a warning to stay as far away as possible and seek out better forms of discovery than Amazon’s website, like visiting an indie bookstore, asking a friend, or reading a magazine—looking for anything but what rises to the top of the feed.”

“I’ve read everything David Sedaris has published — some things many times over … What he does in his exquisitely crafted essays is reconstruct his life as a funny story, the kind you’d hear at a dinner party if you were very lucky in your friendships … When Sedaris’s first volume of diary entries came out, I was curious to peek behind the curtain of his prose. It turned out, the diaries…are as clear, direct and funny as his essays … Sedaris’ essays have a strength: They exist for a reason — namely, to describe and preserve his family. His family is the deciding factor that makes him a warm and funny writer to the core, and not a lonely, abstract one … The entries in A Carnival of Snackery focus on small things, the kind of thing Sedaris notices … What sets Sedaris’s diaries apart from his essay collections is not that they’re more intimate (more wouldn’t be possible) or that they show a different aspect of the author or his life, but that the collections themselves are longer. Time passes … To portray the passage of time is, I think, the great artistic advantage of a thick novel or a long memoir. It’s large-scale art: architecture rather than sculpture, grand painting rather than doodle. The problem with a big, structural work of art is that the small parts often atrophy and drift away. Someone like Sedaris, who has such a gift for illuminating small things, would normally have no business crafting an edifice. But the beauty of a diary is that it doesn’t need to be crafted. It just grows on its own, while the diarist concentrates on the human-scale (or even microscopic) things that interest him.”

Elizabeth Wetmore and Kathryn Nuernberger on SB8, the History of Abortion, and Roe v. Wade in Danger 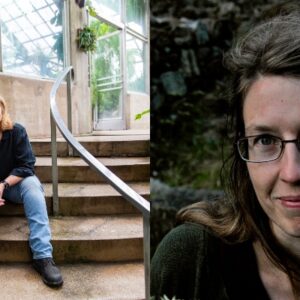 Elizabeth Wetmore and Kathryn Nuernberger on SB8, the History of Abortion, and Roe v. Wade in Danger