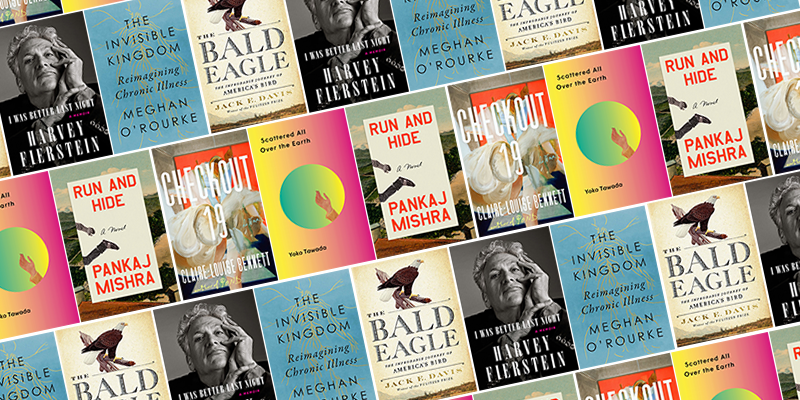 Yoko Tawada’s Scattered All Over the Earth, Claire-Louise Bennett’s Checkout 19, and Harvey Fierstein’s I Was Better Last Night all feature among the Best Reviewed Books of the Week.

“… enthralling … if you’ve had your fill of autofiction, thanks—don’t lose interest just yet. If much of the genre can be fairly criticized for its narrowness, Checkout 19 suggests it perhaps hasn’t yet been fully explored. True, Bennett shares a similar biography to that of her narrator, but the life she describes is one blown open by imaginative writing, by the work other writers have fashioned from their own lives, and by the transformative and transportive nature of reading … Bennett gorgeously conveys the embers from which every story begins.” 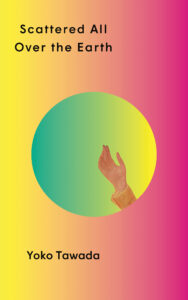 2. Scattered All Over the Earth by Yoko Tawada, trans. by Margaret Mitsutani
(New Directions)

“… mordantly funny … More than simply international, her writing is translingual; she leaves the borders between languages open and allows them to cross-pollinate. To translate her into English is to excavate linguistic strata: Panska reads like a Japonic parody of Nordic syntax translated into a West Germanic language … Each character in Tawada’s ‘band of zigzag travelers’ is given chapters to narrate in the first person. These limited perspectives give rise to a comedy of intercultural misunderstandings that both move the plot forward and provide targets for Tawada’s sharp satire … Judging by the recent migrant crises that informed Tawada’s novel, it is a long-overdue lesson. By the time we are reading the trilogy’s final volume, the climate-fiction scenario Tawada drapes in the trappings of picaresque comedy will no longer seem speculative.”

3. Run and Hide by Pankaj Mishra
(Farrar, Straus and Giroux)

“[Mishra’s] view of modernism and its promises of global wealth, growth and fulfillment is skeptical, curious and almost uncomfortably piercing. In his new novel, Run and Hide, he sweeps globalization, populism, cultural upheaval and the crisis of modern masculinity into the story of a modernized India … Colorful … The novel is deeply Indian, and surely readers like this one who are less familiar with the subtleties of the history, culture and language of that country will miss a lot, despite Mishra’s thrilling specificity and description. But like most things in this 21st century world, the book does not stop at borders … Mishra’s scenes of life among the modern elites of Delhi, London and New York…are so precise and well-observed they are almost embarrassing … Mishra is a masterful eyewitness to the modern world, equally unafraid of nuance, earnestness and absurdity. Run and Hide…is not plot-driven. It is a slow, careful book about a fast and reckless world. This is not a destination novel; it is a journey novel. One well worth taking.”

“Davis’s most surprising contribution is to show how adulation of the natural world can accelerate its destruction. We came very close to loving the bald eagle to death … That we didn’t…is the source of the book’s bouncy optimism. The Bald Eagle is the rare natural history that plays as a comedy. It’s a dark comedy, however, because its lessons are not easily transferable to our broader, ongoing ecological catastrophe … The Bald Eagle is a shaggy dog. It proceeds by the principles of accretion, with no eagle fact, or eagle-adjacent fact, left behind … From the trivia, however, emerges a moving portrait of a species victimized for its own evolutionary successes … Davis makes the subtle but persuasive point that the ubiquity of eagles in American culture…made individual animals seem expendable.”

2. I Was Better Last Night by Harvey Fierstein
(Knopf)

“I Was Better Last Night is very quilt-like. Fierstein shares his life less in conventional chapters than in colorful patches: 59 of them, stitched together with photos and a plush index. The sum of this is warm and enveloping and indeed two-sided: One is a raw, cobwebby tale of anger, hurt, indignation and pain; flip it over and you get billowing ribbons of humor, gossip and fabulous, hot-pink success … As with a treasured blankie, the frayed side is somehow more lovable … Unsurprisingly, some of the snappiest parts of this book are bits of remembered dialogue … I Was Better Last Night gets to be more of an extended, eye-rubbing Tony acceptance speech after Fierstein hits the big time … Still, this man seems to roll around, constitutionally, in velvety darkness. Medical matters, including a suicide attempt in the mid-1990s, are handled with matter-of-fact frankness … There are enough one-liners in I Was Better Last Night for a one-man show … With a dramaturge’s expert timing, Fierstein saves the most difficult anecdote of his upbringing for near the end, like the classic 11 o’clock number in musical theater. A story about his mother’s reaction to his accidental coming-out, it’s a pin prick to the heart. Actually it makes the heart a pin cushion.”

“O’Rourke boldly investigates the origin of her ills and possible cures. More crucially, she probes the cultural, psychological, and medical experiences of people with poorly understood or immune-mediated illnesses … Refreshingly, Invisible Kingdomavoids battle analogies and a redemptive narrative arc … O’Rourke’s telling is an essential one … One of the book’s most riveting themes is how O’Rourke grapples with her identity as a sick person … Invisible Kingdom couldn’t be more timely.” 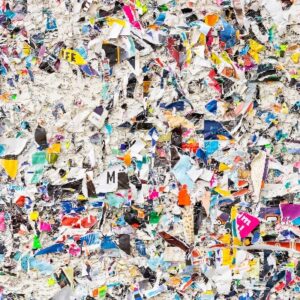 I have the impression, when I look back on it, that my childhood took place in an era of the scarcity of images. Such a characterization...
© LitHub
Back to top
Loading Comments...