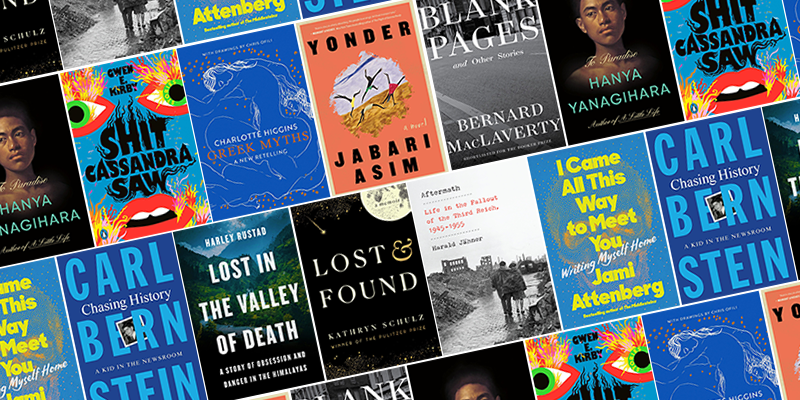 Hanya Yanagihara’s To Paradise, Bernard MacLaverty’s Blank Pages, Jami Attenberg’s I Came All This Way to Meet You, and Carl Bernstein’s Chasing History all feature among the Best Reviewed Books of the Week.

“… a deft and life-affirming collection by a master of the form … The 12 stories in the new book are centred on the Belfast writer’s age-old preoccupations: love, loss, endurance, resilience, war, violence, the toxicity of perceiving human beings as ‘other’. They are bright bullets that lodge, written in spare but achingly accurate prose. MacLaverty is known for his precision and the realistic details that bring his stories so memorably to life. Many times during the collection I wondered how he came upon certain details, that seem, cumulatively, to be beyond the imagination of the writer, beyond research or Google … The range of the collection is remarkable. Different eras and backdrops abound, each one told with aplomb … soft touches of humour appear throughout … a gem of a collection that fully immerses from beginning to end.” 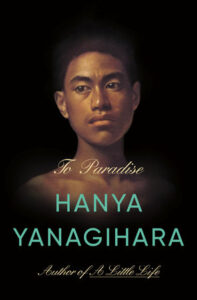 2. To Paradise by Hanya Yanagihara
(Doubleday)

“I felt the impulse a few times to put down the book and make a chart—the kind of thing you see TV detectives assemble on their living-room walls when they have a web of evidence but no clear theory of the case … To Paradise, though its plots are too various and intricate to even begin to capture in summary, moves smoothly and quickly … It is executed with enough deftness and lush detail that you just about fall through it, like a knife through layer cake … To Paradise evokes the dizzying way that minor events and personal choices might create countless alternative histories and futures, both for individuals and for society. Reading the novel delivers the thrilling, uncanny feeling of standing before an infinity mirror, numberless selves and rooms turning uncertainly before you, just out of reach … Small choices leading to unforeseen consequences are a conventional feature of fiction, but Yanagihara’s execution of this trope feels compelling and chilling because Charles’s world is so plausibly near to our own possible future … Yanagihara’s feat in To Paradise is capturing the way that the inevitable chaos of the present unrolls into the future: It happens on both global and intimate levels, always.”

“Shockingly inventive … Piercing … So it goes, dazzling story after story … Through humor, ferocity and sometimes a healthy dash of surrealism, Kirby meditates on the fears, joys and pains of being a woman throughout the centuries. Every story feels unique, yet they’re tied together by Kirby’s mind-bendingly confident writing and her clear fascination with strong yet vulnerable women … Shit Cassandra Saw is pure pleasure with something for everyone, especially readers interested in thinking deeply about womanhood from every possible angle. Kirby’s characters are sometimes sinners and never saints, as complex as the real-life women we know and love.”

“Charlotte Higgins has embraced a central metaphor—weaving—that leads us through the labyrinth of interconnected stories in a startlingly fresh way. It throws radiant new light on their meanings. Although her chief model is Ovid’s phantasmagoric mythological compendium in his Metamorphoses, her voice is quite different—more tender and pensive—and she uses her considerable scholarly skills to mine many other ancient sources, rescuing some little-known stories from obscurity … The importance of visualisation to the enjoyment of this book, a beautiful artefact in itself, is subtly indicated by prompts to the mind’s eye in the form of Chris Ofili’s exquisite line drawings on the dustjacket and at the opening of each chapter, and by the colour scheme … The book would make a perfect introduction to the entrancing world of Greek myth for any secondary school student. Its thoughtful introduction, ample notes pointing to the ancient sources, bibliography of accessible further reading, maps, genealogies and glossary make it a useful resource for far more advanced adult readers. And Higgins’s simple yet sonorous style contains treats even for those lucky enough, like her, to have read her ancient sources in the original languages.”

“The chapters alternate between the points of view of each character, an approach that simultaneously offers a wide view of plantation life and an intimate look at the daily realities of each of the Stolen. Asim shows the constant state of being under siege—the menacing tactics of an enslaved foreman, a Thief’s pickling of a man as punishment, the torment of a woman because of her Thief’s sexual advances. Yet he tempers the storytelling with coveted moments of tenderness … sits within a rich oeuvre of historical fiction that centers the lives of enslaved people, situating their experience in the context of American history. The novel’s explorations of love and survival, blended with its examination of violence and servitude, call to mind Alex Haley’s Roots and, more recently, Robert Jones Jr.’s The Prophets … What sets Asim’s book apart is the way Yonder portrays the spiritual resilience of enslaved people … Though I was at times unsure of the sexually aggressive stance many of the Stolen women in the novel exhibit while selecting their partners, initiating or demanding satisfaction, Asim never strays to the horrid trope of the hypersexualized Black woman. I believe his portrayal offers agency to these enslaved women, giving them the often-denied ability to choose when and with whom to be intimate. With his handling of Black love, showing how it existed amid the worst circumstances, tender and memorable, Asim delivers a fresh, sweeping, must-read tale … shows that dreams and Black love have always been tools of survival in the quest to reach that better place just out of reach. ” Members of the Stolen take turns driving the plot; rich and vivid stories are their only saving grace … Asim vividly captures the daily rhythms of the Stolen’s lives, in which harshness is punctuated by brief spells of joy. As the enslaved embark on a soaring adventure in pursuit of freedom, a gripping and satisfying crescendo caps this lyrical story.”

“Schulz’s mind flows beautifully on the page. While this book is classified as a memoir, it can also be read as a sweeping set of essays. Schulz’s prose is lucid and intentional, yet unexpected and compassionate. She doesn’t race to make her point and that expansive pace is what makes this book such a pleasure. Hers is a nimble and profoundly humane mind, capable of carrying the various threads of her thinking onward without losing the integrity of the fabric she’s creating … Schulz uses her life’s stories as a launching point for an omnivore’s exploration of science, space, history, art, and writing in order to elaborate her points. Rather than dwell on her personal life, weighing the reader down with the operatic twists of some memoirs, Schulz treads lightly on the drama of her days. She’s not writing for her own personal catharsis … While this memoir is no quest for healing or a chronicle of family secrets, there is great weight in Schulz’s most personal moments. Being privy to her budding romance is a window into intense tenderness and deep gratitude … Where other memoirs concentrate on facts and family history, Schulz finds a way to subvert the genre, taking it to philosophical levels while maintaining a grounded intimacy.”

.. a scholarly masterpiece which is also a good read … The material is as grim as can be imagined, and Jähner pulls no punches. But he doesn’t allow his story to degenerate into a catalogue of horrors. Instead, we are offered anecdotes and incidents, each memorable, many illustrated by newly discovered photographs, which build into a history which reads like a prelude to Waiting for Godot, that great work of 1949. In vignette after vignette, people remain people, however apocalyptic the events they have just participated in or witnessed or had visited upon them.”

3. I Came All This Way to Meet You by Jami Attenberg
(Ecco)

“[Attenberg’s] distinctive, personable voice, which shines on social media and in her writing-focused newsletters, gets a full-on outing here, with intimate glimpses of her youth … This is a book of journeys: she road-trips on book tour; she lives in Seattle, in Manhattan, in New Orleans; she goes to Portugal and Sicily and Hong Kong, and on family trips to the East coast. But the most tangible and pleasurable journey is the one in which she describes discovering her voice, her yearning for agency, and the myriad ways in which she achieves that desire … That knowing humor flavors her memoir … pretty much all the anecdotes involving her family—people for the most part so clearly warm and inquisitive, interested and committed—left me wanting more of their stories as well as more of hers … a book about the making of writer in the best possible way—accessible, funny, illuminating. It’s a book about kindness and grief, joy and forgiveness, failures, challenges, mistakes, and hope. It’s also a terrific ode to good art and true friendship. ‘Books are your love language,’ a friend tells Attenberg. Which, as far as I’m concerned, makes I Came All This Way to Meet Youone hell of a terrific love letter.”

4. Chasing History: A Kid in the Newsroom by Carl Bernstein
(Henry Holt)

“… charming … Anyone seeking relief from hashtags, tweets and Instagram is free to revel in the book’s pre-cyber lingo of subheads, galley proofs and ‘stocks final’ editions … Along with the paraphernalia, Mr. Bernstein gives us the people, a few of them familiar, most of them unknown or long-forgotten. He capably resurrects the stylishly dressed city editor Sid Epstein, whose meticulousness and strength made him the man Carl Bernstein hoped to become … Chasing History contains its share of boilerplate…and while Mr. Bernstein has clearly consulted his old reporter’s notebooks, certain incidents and conversations are recalled with an unlikely quotient of conveniently colorful detail. The stentorian tones of the latter-day Bernstein, what one now hears from him on CNN, occasionally sound between its covers, but this is a book chiefly distinguished by nostalgia and warmth.”

5. Lost in the Valley of Death: A Story of Obsession and Danger in the Himalayas by Harley Rustad
(Harper)

“Rustad proves himself here to be a masterful storyteller, unfolding character, plot, suspense, pathos, bathos and half a dozen other Greek nouns so meticulously that you’re not going to want to put this book down … Though he had some extraordinary abilities and drives, as most people do, Shetler’s depth was the kind we all have, the profundity every human life creates and, in putting so much work into documenting it, Rustad’s done us the favour of celebrating our complex muddles of good and bad and stupid and smart … His notes on sources at the end of the book run to 10 pages and not one of them is superfluous. It’s like he’s held up a crystal dodecahedron for us to see how many ways Shetler could be reflected in the eyes of others … like any good book, and this is a very good book, it provides no real answers, no closure, no meaning. It’s just life, as seen through the lens of one of its sadder stories.”

Mattilda Bernstein Sycamore on Writing on Your Own Terms

Exit Wounds: On the Roots of Violence—and Its Complicated Aftermath 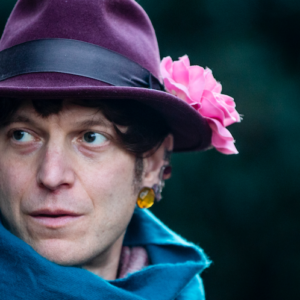 Mattilda Bernstein Sycamore on Writing on Your Own Terms

This essay was originally presented as a talk at the Tin House Summer Workshop. You can listen to it on Between the Covers,...
© LitHub
Back to top
Loading Comments...