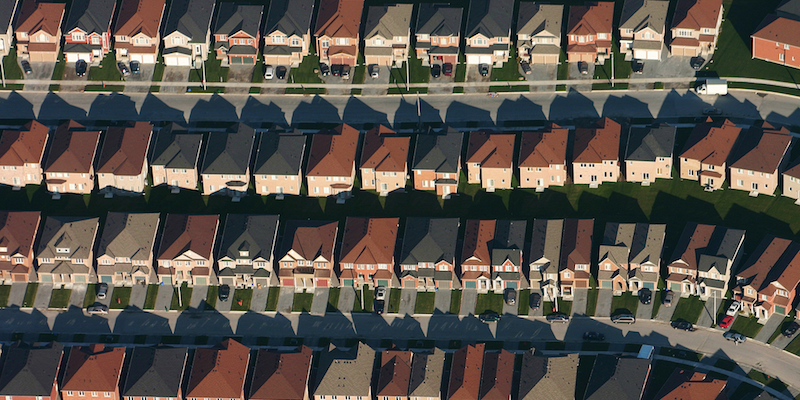 via university of texas press

Meghan Daum on the complexities of where we take shelter

In the canon of common dreams, it’s a classic among classics: the dream in which we discover an unfamiliar room in a familiar house. The way it usually goes is that we’re in some kind of living space, maybe our own, maybe a space that’s inexplicably taken some other form (“It was my grandmother’s house, but somehow the prime minister of France lived there!”), and suddenly there’s more of it. Suddenly the place has grown a new appendage. But it’s not exactly new. There’s a sense that it’s been there all along yet has managed to escape our notice. Sometimes there’s just one new room, sometimes there are several. Sometimes there’s an entire wing, a greenhouse, a vast expanse of land where we’d once only known a small backyard.

We are amazed, enchanted, even chastened by our failure to have seen this space before now. We are also, according to psychologists and dream experts, working through the prospect of change, the burgeoning of new possibilities. The standard interpretation of the extra-room dream is that it’s a portent, or just a friendly reminder, of shifting tides. The room represents parts of ourselves that have lain dormant but will soon emerge, hopefully in a good way, but then again, who knows? Look harder, says the extra-room dream, the geometry of your life is not what it seems. There are more sides than you thought. The angles are wider, the dimensions far greater than you’d given them credit for.

Not that we can hear much on that frequency. The human mind can be tragically literal. Chances are we exit the dream thinking only that our property value has increased. But upon fully waking up, the extra room is gone. There’s a brief moment of disappointment, then we enter our day and return to our life. We organize our movements in relation to the architecture that is physically before us. That is to say, we live our lives in the spaces we’ve chosen to call home. 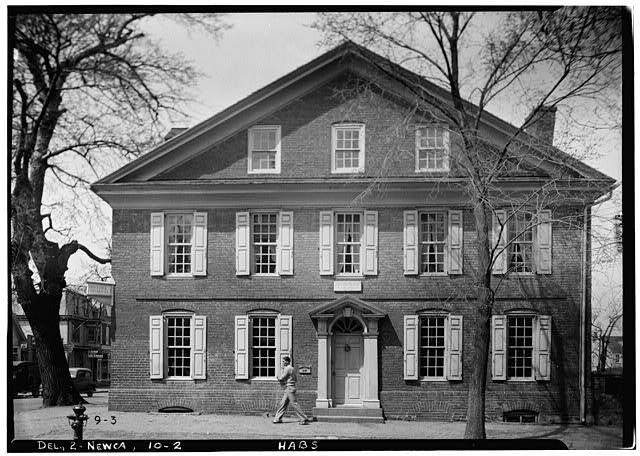 Let’s get one thing straight. A house is not the same as a home. Home is an idea, a social construct, a story we tell ourselves about who we are and who and what we want closest in our midst. There is no place like home because home is not actually a place. A house on the other hand (or an apartment, a trailer, a cabin, a castle, a loft, a yurt) is a physical entity. It may be the flesh and bones of a home, but it can’t capture the soul of that home. The soul is made of cooking smells and scuffmarks on the stairs and pencil lines on a wall recording the heights of growing children. The soul evolves over time. The old saying might go, “You buy a house but you make a home,” but, really, you grow a home. You let it unfold on its own terms. You wait for it. Home is rarely in the mix the day we move into a new house. Sometimes it’s not even there the day we move out. It’s possible we should consider ourselves lucky if we get one real home in a lifetime, the same way we’re supposedly lucky if we get one great love.

“All architecture is shelter,” said the postmodernist Philip Johnson. “All great architecture is the design of space that contains, cuddles, exalts, or stimulates the persons in that space.”

I guess this is where I come clean. I write this as a person for whom houses can have an almost aphrodisiacal quality. I say “almost” because the other charge I get from a beautiful house feels like something close to the divine. A perfect house—and by that I mean a respected house, one that was honorably designed and solidly built and allowed to keep its integrity henceforth—is a tiny cathedral. But a perfect house is also lust made manifest. It can make its visitors delirious with longing. It can send butterflies into their bellies in ways a living, breathing human being rarely can. A house that’s an object of lust says, You want me, but you’ll never have me. It says, You couldn’t have me even if you could afford me. You couldn’t have me even if I didn’t already belong to someone else. And that is because houses, like most objects of lust, lose their perfection the moment we’re granted access. To take possession of a house is to skim the top off of its magic the minute you sign the deed. It is to concede that the house you live in will never be the house you desired so ravenously. It is to accept that the American dream of homeownership is contingent upon letting go of other dreams—for instance, the kind where the rooms appear where there were none before.

Maybe that’s why architects are such sources of fascination, even aspiration. If they want an extra room, they just draw it. If they want a bigger window, a wider archway, a whole new everything, the pencil will make it so. At least that’s the layperson’s fantasy. It’s not surprising that so many fictional heroes in literature and film are architects. The profession, especially when practiced by men, seems to lend itself to a particularly satisfying montage of dreamboat moments. Here he is, artistic and sensitive at his drafting table. Here he is, perched on the steel framework of a construction site high above the earth, hard hat on his head, building plans tucked under his arm in a scroll. Here he is, gazing skyward at his final creation, his face lit by the sun’s refraction off his glass and steel, awestruck by the majesty of it all and awesome in his own right.

“As with ‘happiness,’ another abstraction Americans are forever trying to isolate and define, ‘home’ has always felt to me so ephemeral as to almost not be worth talking about.”

Nearly always, these are men on a mission. Theirs is not a vocation but a passion that both guides them and threatens to ruin them. In Ayn Rand’s novel The Fountainhead (perhaps the ne plus ultra of architect fetishization), the grindingly uncompromising Howard Roark winds up laboring at a quarry because he won’t betray his aesthetic principles. In Graham Greene’s A Burnt-Out Case, the internationally renowned but existentially bereft architect hero flees to a leper colony for solace. Hollywood, too, seems to prefer its architects miserable and brooding, not just in the form of adorably widowed dads like Tom Hanks’s character in Sleepless in Seattle and Liam Neeson’s in Love Actually (and wasn’t the distinctly non-brooding architect patriarch of The Brady Bunch technically a widowed dad?) but also adorably commitment-phobic boyfriends and jealous, cuckolded husbands. More often than not, the intensity of their vision has contributed mightily to their demise. Why did Woody Harrelson’s character, a struggling architect, let Robert Redford’s character sleep with his wife for a million dollars in Indecent Proposal? Because he was deeply in debt from trying to build his dream house.

Well, what better way to go down?

I think part of my problem with “Where is home?” (and the arguably worse “Where are you from?”) is that it denies people their complications. We all have one definitive birthplace (unless we were born at sea or in flight, I suppose), but after that it’s a matter of interpretation. The dwellings in which we are raised do not necessarily constitute “home.” The towns where we grow up do not always feel like hometowns, nor do the places we wind up settling down in as adults. Census data tell us that the average American moves eleven times over a lifetime. For my part, I’m sorry to say I have lived in at least thirty different houses or apartments over the course of my years. Actually, I’m not sorry; each one thrilled me in its own way. But despite those thrills, only a handful felt anything like “home,” and even then, the feeling was the kind that visits you for a moment and then flutters away. As with “happiness,” another abstraction Americans are forever trying to isolate and define, “home” has always felt to me so ephemeral as to almost not be worth talking about. As with happiness, it’s great when you happen upon it, but it can’t be chased.

A house, on the other hand, is eminently chaseable. There’s a reason shopping for a house or an apartment is called hunting. Real estate turns us into predators. We can stalk a house online or from the street. We can obsess over it, fight over it, mentally move into it and start knocking down walls before we’ve even been inside. We can spend Sundays going to open houses as though going to church. We can watch home design programs on television twenty-four hours a day. We can become addicted to Internet real estate listing sites as though the photos and descriptions were a form of pornography—which of course they totally are.

“I wish I had never seen your building,” says Patricia Neal as Dominique Francon, the austere and tortured lover-then-wife of Howard Roark in the film version of The Fountainhead. “It’s the things we admire or want that enslave us.” 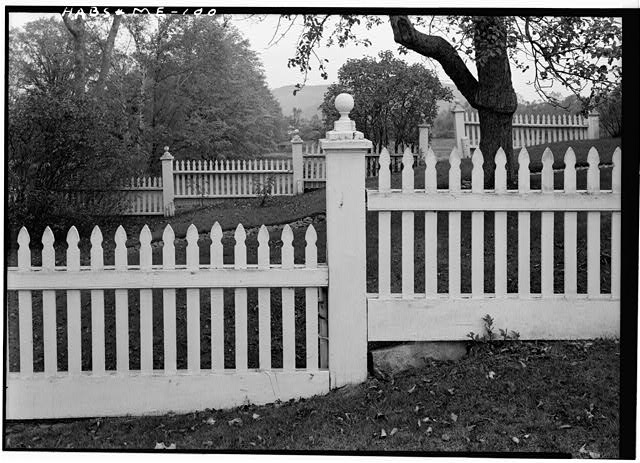 It’s pretty clear that houses, despite being among our greatest sources of protection, are also among our greatest enslavers. You might say that’s because we go into too much debt for them and make them too large and fill them with too much junk. You might say it’s because they’re forever demanding our attention, always threatening to leak or crack and be in the way of a tornado. They are sanctuaries, but they are also impending disasters. And most tyrannically of all, they are mirrors. They are tireless, merciless reflections of our best and worst impulses. Unlike the chaos and unsightliness of the outside world, which can easily be construed as hardly our responsibility, the scene under our roofs is of our own making. The careless sides of ourselves—the clutter, the dust, that kitchen drawer jammed with uncategorizable detritus that plagues every household—are as much a part of us as the curated side. Our houses are not just showplaces but hiding places.

Our homes, on the other hand, are glorious, maddening no-places. They are what we spend our lives searching for or running away from or both. They are the stuff of dreams, the extra rooms that vanish upon waking, the invisible possibilities we tamp down without even knowing it. They are the architecture of the unconscious mind—which is a physically uninhabitable space. Thank goodness there are people out there building houses. 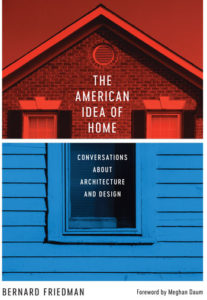 From The American Idea of Home: Conversations about Architecture and Design by Bernard Friedman. Used with permission of University of Texas Press. Foreword copyright 2017 by Meghan Daum.

Meghan Daum is the author of four books, most recently the collection of original essays The Unspeakable: And Other Subjects of Discussion, which won the 2015 PEN Center USA Award for creative nonfiction. She is also the editor of Selfish, Shallow & Self-Absorbed: Sixteen Writers on the Decision Not To Have Kids. Her other books include the essay collection My Misspent Youth, the novel The Quality of Life Report, and Life Would Be Perfect If I Lived In That House, a memoir.

Richard Ford’s Uncanny Memories of His Parents in Love

The Political Murakami on Life in a Dark Timeline 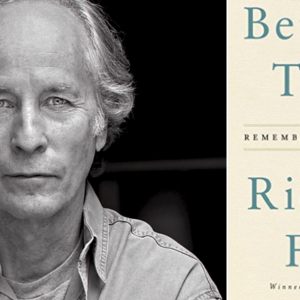 Richard Ford’s Uncanny Memories of His Parents in Love

In 1928, a pretty 18-year-old named Edna Akin worked long hours at a hotel cigar stand in Hot Springs, Arkansas. Pulled out of convent...
© LitHub
Back to top
Loading Comments...