Breast Exams, Harry Mathews, and Maybe (Just Maybe) the Lines of a Story

Mostly, people have a morning routine. What they do first, second. The rest of the day may be determined more by how they make a living. In any case, people have loads of habits. In a way, a “self” might be made up from habits.

I wake up at 9:30, 10, or 10:30—I sleep late and sleep longer and longer (unless I have to teach or have an appointment). Sleeping longer might be my unconscious opposition to the theory that, as you get older, you sleep less. But I do many things in opposition, writing, especially.

I pour water into an electric kettle to boil, then brew a big pot of Irish tea, usually, in an old English teapot given me by writer Harry Mathews, who died a few years ago; it was once his mother’s.

I knew him for about ten years when we were walking in SoHo, when SoHo had galleries, and there was a lovely teapot in a store window—ceramic, white, its surface like petals. I was gazing at it. He asked, “Do you like it?” I said yes, and unexpectedly he went into the store and bought it for me. I used that teapot while I wrote my second novel Motion Sickness. After I finished the novel, its spout chipped badly. Much later, Harry gave me the one I use now, his mother’s teapot.

I let the tea brew for five minutes. Usually I set a timer, but sometimes I don’t. I don’t know why I don’t, a timer is easier. I may be testing my memory, I test myself a lot. How many things can I do at once? This is not good, especially in the morning, when I’m not fully awake, and might start doing something and start something else, and not finish either.

I like my tea very strong, flooded with two percent lactose-free milk. To other tea drinkers, the more orthodox, this might be oxymoronic.

When I lived in London, after college, I began drinking tea. Among the English, if I visited someone or returned home, immediately, an English friend or roommate would say, Have a cup of tea? If you were feeling miserable or depressed, as I often was, and sometimes am, the person would add, “Have a cup of tea. It’ll make you feel better.” After a while, it did. A cup of tea made me feel better. Tea is the English placebo.

I used to hate tea. The way I first drank it, as a child, I would be with my family in a nice Chinese restaurant, given a cup of tea in a small white handle-less cup. It was too hot to hold or drink, and too bitter. So were the family fights.

In high school, I drank coffee the way my friends and other Americans usually did. Apparently, and unknown to me, when I sat across from my friends and talked with them, if I was the one talking, I would keep my eyes on them, and wouldn’t look down at the cup. One time, in the diner (I was a suburban girl) the waitress brought

us all coffee. I was saying something, turning my coffee cup around and around to find the handle. But there was no handle. Finally I looked down. My friends roared with happy laughter. They weren’t mean, then.

My breasts turned tender in my late twenties. My breasts were cystic, or had “fluid-filled masses,” which were not cancerous, and nothing to worry about but painful. Coffee made the condition worse. I stopped drinking it, and, like a miracle, my breasts stopped causing me pain, and gave me more pleasure.

It was my gynecologist, Dr. Ernst Kulka, who told me to stop drinking coffee.

I haven’t thought about Dr. Kulka in a long time.

Dr. Kulka was born in Vienna, Austria, in 1896. I met him when he was in his eighties. He wore tiny, wire-rimmed glasses, was shorter even than I am—I’m 5 foot 1 ½ inches—and a little stooped over. He was soft-spoken, and I have never had a gentler gynecological exam.

Dr. Kulka warmed the speculum, for one thing, and his breast exams—a thing of beauty. He would bend toward my body and close his eyes tight and keep them closed as if he were dreaming. He leaned in toward my chest, lowered his head, and examined my breasts with the lightest of touches, like a butterfly might. Under his fingers, my breasts transformed into extraordinary flesh. Until he was sure of his findings, Dr. Kulka’s eyes stayed closed.

He learned to detect tumors and abnormalities under many sheets of tissue paper. He was very against the way doctors are taught now: they relied on machines. Women shouldn’t be subjected to needless radiation, often yearly, and wouldn’t be, if doctors were given his training and could feel breasts properly.

When abortions were illegal, Dr. Kulka performed them. He never told me where. It was horrible before Roe v. Wade, you and your doctor were criminals because you didn’t want a child. Dr. Kulka fought for women’s reproductive and other rights. He opened a family planning clinic in Harlem. And, oh yes, he loved delivering babies.

I miss him, I like remembering him, visiting his office, and have many thoughts while lying in bed, half-asleep, before I get myself up, and when drinking my first cup of tea in a large cup. I drift on thoughts.

I’m particular about my tea cup. Sometimes I switch cups until I find the right one. I prefer a large cup, usually older-fashioned, but have drunk from many kinds of teapots and cups, and usually return to something with a history. Once it was a cup given to me by artist Kiki Smith, a beautiful, old cup she found in Germany. I don’t know what happened to it. I think it broke. I must have broken it, somehow it was dropped. I was favorite cup-less for a while, out of sorts or not myself, because a habit was broken too.

What I eat for breakfast and when I eat has changed. I like to change my habits, though they’re hard to change. For a while, I ate soon after I awoke. I used to eat muesli. I used to eat eggs. Now, I have my tea, and don’t eat anything for an hour or two. I’m not sure why. It might be because the morning is a simpler, quieter time, and I want the morning to go on and on.

Now I eat a slice of whole wheat toast, I like it dark with jam.

After breakfast, I might begin to write. Or not. But I turn my phone off. I look at what I wrote the day before or a week ago, and drink my last cup of tea. Or, I do email, which is dangerous, because it leads me faraway from what I believe I should do, write. I procrastinate or avoid, and emails and texts make me nervous, anxious, because there are many messages to answer or put off until later, when you might forget.

I am not a writer with a lot of discipline or regular writing habits. Somehow I get my writing done, because once I start a story, I want to see what happens, I’m curious, keep it going, to see where it goes, and, also, I finish what I start.

For instance, my novel American Genius, A Comedy. (It’s in a new edition, with an introduction by Lucy Ives.) It was written in bunches, over six years.

A woman’s voice came to me in a few sentences I wrote to a friend, writer Lydia Davis, she liked the voice, and then I became interested in that voice. First, I had an idea about how Americans are becoming so sensitive, then her voice came along, joined to that idea about sensitivity, and skin. Her skin, her dry skin. Then, what she thinks about, in a mysterious place, an unnamed institution, where many strange people live also, and there I went. And, finally it was finished. It’s always funny, odd, crazy writing the last sentence. That never changes.

Charles Simic and Barry Lopez, on a Roadtrip, 1972 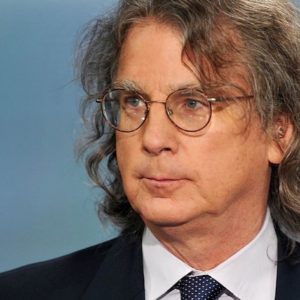 Roger McNamee is the guest on this week's Otherppl. His new book Zucked: Waking Up to the Facebook Catastrophe, is a New York...
© LitHub
Back to top