Roger McNamee is the guest on this week’s Otherppl. His new book Zucked: Waking Up to the Facebook Catastrophe, is a New York Times bestseller, available from Penguin Press.

McNamee has been a Silicon Valley investor for 35 years. He co-founded successful funds in venture, crossover and private equity. His most recent fund, Elevation, included U2’s Bono as a co-founder. He holds a B.A. from Yale University and an M.B.A. from the Tuck School of Business at Dartmouth College. Roger plays bass and guitar in the bands Moonalice and Doobie Decibel System and is the author of The New Normal and The Moonalice Legend: Posters and Words, Volumes 1-9. He has served as a technical advisor for seasons two through five of HBO’s “Silicon Valley” series and was also responsible for raising the money that created the Wikimedia Foundation.

Roger McNamee: The way to think about is, I started investing in the technology industry in 1982, which is the very tail end of the Apollo era of Silicon Valley when the space shuttle and the government were the primary focus. The personal computer era was just beginning, so I was there for the beginning of the PC business. I’m the same age as people like Bill Gates and Steve Jobs, so getting to know people like that was a completely organic thing because they weren’t yet as famous as they eventually would be—and god knows they weren’t as rich. I grew up with the industry. I’m there for the PC industry. I’m there when enterprise products for businesses really takes off and when the Internet begins. I started in mutual funds, which was a place where in the eighties you could be involved with tech in a very academic way. It wasn’t a job you went into to get rich; it was a job you did because you were interested in it.

Brad Listi: You were a nerd.

RM: I was a nerd. My brother had given me a Speak & Spell in 1978, and he said to me that because they can make this thing talk with a couple AA batteries and have a screen and all, this means you’re going to be able to hold all your personal information in your hands in just a few years.

BL: This was your older brother.

RM: Yes, my older brother. That idea just grabbed me, and weirdly it was seventeen years before the Palm Pilot. It was the year after the Apple Two and still three years before the IBM PC. That idea he had—which literally went right out of his head and I don’t think he ever thought about it again—I couldn’t let it go. I was terrible at math, so I couldn’t figure out how to make a prototype of this idea. It was too early, and I was not clever enough to figure out how to do it, so I go into the research world in a very academic setting because I wanted to be there when it happened. I grew up with the industry, and I got to be there. I was involved with Palm. In many ways, it was a perfect situation.

Then, in 2006, I get an email from somebody at Facebook who says, “My boss has a crisis, and he needs to talk to someone who is both experienced and objective and who can keep a secret. Would you meet with him?” I said, sure. I’m pretty free next week, and they said, “No, one o’clock today.” Mark Zuckerberg, age twenty-two, comes to my office. I’m fifty. The company is two years old. He comes, and it was straight out of central casting: the hoodie, the flip-flops, the carrier bag.

Imagine this scene. I had started a firm with Bono from U2 called Elevation, and one of the partners had been the president of Electronic Arts, the video game company, so we had one conference room that was not set up like a conference room but set up like a living room with what was then a giant flat-panel TV with huge speakers and this arcade video game that had been se up with a computer inside of it that had every arcade game ever made in the history of the universe. It had like five thousand different game in every variant. The room is totally soundproof, so it’s weird if nobody says anything because it’s really dead.

Mark sits down maybe three feet away from me, closer to me than I am to you. We’re in comfy chairs. I say, “Mark, we don’t know each other so I have to say something to you because once you start talking you’ll assume anything I say after that is affected by what you told me. I need to give you some context because otherwise we won’t have a free exchange of ideas.” He says go ahead. So I go, “If it already hasn’t happened, either Microsoft or Yahoo is going to offer one billion dollars for Facebook.”

Now keep in mind that the company is two years old and they had nine million dollars in sales, which seems like a big number in a normal sense but realistically in tech terms it’s nothing. “They’re going to offer you a billion dollars, and everyone you know—your parents, your board of directors, your management team, your employees—are going to tell you to take the money, Mark. You’re going to have six hundred and fifty million bucks. You’re going to be able to change the world with six hundred and fifty million bucks.” And I said, “I thought about this a lot and I think you have something really special. I think you solved the core problem with big networks because you require authenticated identity.”

BL: What does that mean?

RM: You could only get on Facebook then if you had an email address from a university or a high school.

BL: And that was the differentiator between Facebook and MySpace?

RM: And everything that came before. Everything before it permitted anonymity because in the early day of the Internet one of the things we got wrong was that we thought idealistically that people would behave well. Giving them anonymity gave them a benefit they wouldn’t abuse, and it turned out just the opposite happened. Anonymity meant that trolls would overwhelm any network overnight. By requiring authenticated identity, Mark had something totally different. I was convinced—and I told him this—that he would be bigger than what Google was at that time.

So I said, “Look, any company that buys you—whether Microsoft or Yahoo—will kill Facebook. It’s never going to achieve its potential, and if you really believe in your vision and if you really believe in this idea that you created, you need to see it through because there have been a lot of great entrepreneurs who’ve had two brilliant ideas. There has never been anybody who has had two brilliant ideas at exactly the right moment, and this is the right moment for Facebook. So whatever they tell you, you’re never going to be able to do this again.”

What happened after that was the most surreal five minutes of my entire life. Imagine you’re in the sound-deadened room, and I’ve just laid this really heavy thing on him. I’m expecting some kind of feedback. What I get instead is dead silence and pantomime thinker poses. It’s chin on hand, then hand on forehead, then looking up and looking up in the other direction.

BL: For how long?

RM: At the one-minute mark, I’m thinking this is weird. At two minutes, I’m started to get really uncomfortable. At three minutes, my fingernails are digging into the cushion of this comfy chair I’m in. At four minutes, I’m literally ready to scream. Somewhere between four and five minutes, he finally relaxes.

There are two things going on. One, in the back of my head I’m thinking, I’ve never been in the presence of anybody who has thought so hard about something I said. In some ways, that was a real compliment. In other ways, this is really weird, right? Extremely socially awkward. But, I’m a nerd myself and I have learned to recognize character traits in successful entrepreneurs and focus is a really important one when you’re trying to build a tech company, and this guy clearly had off-the-rails focus. So he relaxes and goes, “You’re not going to believe this but what you just described is why I’m here. That exact thing just happened. How did you know?”

BL: So he was taking five minutes to decide whether to trust you?

RM: Right, to trust me. The fact that I literally nailed the exact thing, including the dialogue with a venture capitalist funding his next company and all that, so he might as well trust me because I’ve already figured it out. But I hadn’t. I didn’t know anything. All I did was, I’ve been doing this for twenty-five years and I know these people and I know this industry and I know how they behave. This is what happens with companies in your situation. I got lucky on the billion dollars. He didn’t know what to do. “I don’t want to sell the company. I really want to follow the vision, but I don’t want to disappoint everybody.”

I said, “Well, if you really believe in the vision, you’re capable of delivering it. If you do, they’re going to thank you for not taking this deal.” The whole meeting lasted maybe half an hour. He had a way to stop it, and I showed him how to do it without pissing everybody off.

BL: What was that way?

RM: You sit everybody down and you tell that they signed up for this vision, and we’re proving the vision. You can see it; people are signing up like crazy. Keep in mind, they hadn’t even done Newsfeed yet. The thing was so early. It was like a proto-Facebook, but he hadn’t made any mistakes. He went a really long way before he made mistakes that he would have to undo. Normally at a startup, you get all sorts of things wrong in the early days, and you’re constantly backfilling. The original idea—which was secure and authenticated and you controlled your privacy and you controlled who you shared stuff with—that was genius. In my head, I’m thinking he’s going to make the biggest thing ever, he’s going to get one hundred million people. He’s going to have this incredible success story. I mean, the notion of two billion people would never had occurred to me. I told him later, the problem once you get into the billions is that in order to get there you’re going to have to do things or operate in places that should make you uncomfortable . . . When he told me he wanted to go for billions, that’s the message I gave him. Look, there’s something as too big. 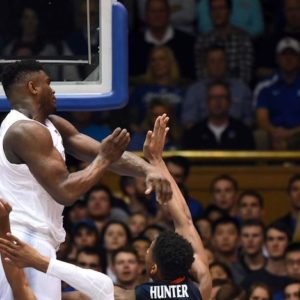 In this episode of the Fiction/Non/Fiction podcast, novelist Marcus Burke and sportswriter Shira Springer discuss writing...
© LitHub
Back to top