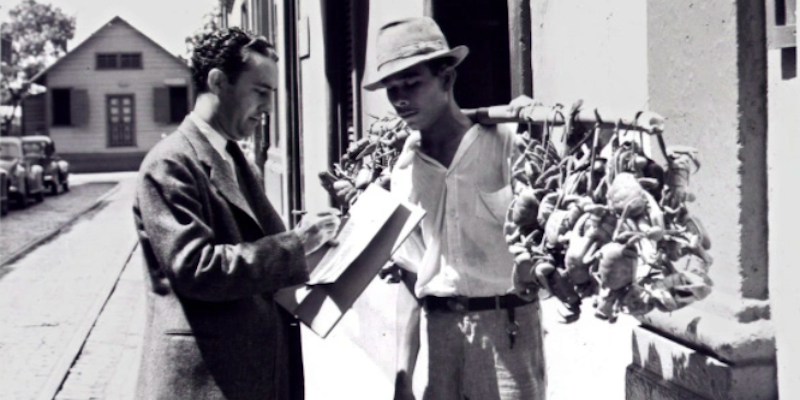 Via MCD/FSG
By Dan Bouk

No person’s name would appear in the published tables of numbers put out by the 1940 census. In those statistics, individuals were supposed to dissolve. Names abound, however, deeper in the data, in the manuscript census records. To know America, America had to know “you”; and America, in the guise of the Census Bureau, came to know “you” by a name written on a census sheet.

What’s in a name? Now, that is a very old question, familiar to many a teenager today tasked by a teacher with reading Romeo and Juliet. It turns out to be a fruitful question for thinking about what happened at each doorstep, where census enumerator and enumerated stood face-to-face, filling in a form designed by a group of white elites: government officials, business leaders, labor union representatives, and intellectuals—the Question Men. “Name” was one of the first of their questions to be answered, one of the first tests of whether what followed would be a cooperative exchange or would instead culminate in conflict.

What’s in a name? That turns out to be the perfect question to showcase how power relations shape every census record and every bit of data, often in ways we can never fully account for.

What’s in a name? A negotiation, perhaps? And so much more.

In 1944, one of the great poets of the era, Langston Hughes, published a poem about issues of identity and the negotiations involved in writing a name in the census, about the names we choose and those that are imposed on us. He titled it, “Madam and the Census Man.”

The poem begins in the middle of a doorstep encounter, with a census taker (the census man) asking for the name of the poem’s protagonist, Alberta K. Johnson. And she yields it freely. But she won’t let this brash enumerator put her name down in just any old way. When he told Johnson that he needed to write out her full middle name, she insisted he could not, that he must not. He wanted it to be “K-A-Y,” but she said it was simply K. The poem is lively and beautiful, a wicked takedown of the “the man” or, more precisely, the “census man.” (I encourage you to read it here, or listen to the entire poem, read by Margaret Walker, here.)

Reading Hughes’s poem forced me, for the first time, to think carefully about the “Name” column in the manuscript census sheets, a column that had previously seemed to me the most simple and straightforward.

Hughes’s poem inspired this chapter and fundamentally reshaped the way I think about census data, even though the conflict at the heart of his poem is silly, absurd, and just plain wrong. Here’s the thing: There would have been no reason to fight about a middle initial, since no census enumerator would have insisted on writing a middle name out fully. Middle names were not required and seldom recorded on census sheets.

Langston Hughes—who did not himself answer the questions of the enumerator four years earlier—appears in the 1940 schedules as just plain Langston Hughes (with the job title “writer” in the industry “literature”). His roommates, similarly: Kit Clark, Dell Ingram, and William Artis (who answered the questions for the others, as indicated by a circled “X” next to his name). Hughes’s neighbor (an inspiration?) appears as Alberta Maynard. Not a middle name among them. Some people did have middle initials—such as the man taking the census that day, Thomas W. Moseley.

What’s in a name? That turns out to be the perfect question to showcase how power relations shape every census record and every bit of data, often in ways we can never fully account for.

The instructions to enumerators in 1940 read: “Enter the last name or surname, then the given name in full, and the initial of the middle name, if any…” They even allow for a first initial followed by a full middle name, according to the preference of the person being interviewed. There was no reason a census taker would object to Alberta K. Johnson’s name.

Yet the poem is not wrong that encounters with census takers could place in peril a person’s dignity or self-sovereignty. That is one of its deeper truths. The literary scholar Kasia Boddy highlights the poem’s concern with “who controls identity”—Alberta K. Johnson wrestles her enumerator for the right to be known as she wishes to be, as her mother named her. The scholar Dellita L. Martin has written, in this vein: “The census taker’s ignorance of the black naming tradition and his arrogance combine to ignite Madam’s temper. He does not know, or even care, that many black people choose to use initials in place of a full name because it signifies distinction, because it marks a privilege to name oneself or one’s own . . .” Martin assumes the enumerator is white in this reading, which seems reasonable; however, that wasn’t the case for Langston Hughes, whose household had been enumerated in 1940 by a Black man. But if the census taker is imagined as white, then the fight over identity takes on additional significance.

The race critical code studies scholar Ruha Benjamin has written, “I will admit, something that irks me about conversations regarding naming trends is how distinctly African American names are set apart as comically ‘made up’… Blackness is routinely conflated with cultural deficiency, poverty, and pathology . . . it harbors a willful disregard for the fact that everyone’s names were at one point made up!” Benjamin wasn’t writing about Hughes’s poem, but she can still help us understand what was happening in that poetic encounter—the census taker’s disdain for “K.” perhaps emerged from his assumption that Black names were, on their faces, more “made up” than everyone else’s names.

“Madam” Alberta K. Johnson fights for her name. That name was a gift from her mother. By changing it, by writing it differently, the census man would dishonor both mother and daughter. The poem reminds us that more is happening in this encounter than a simple act of counting. Respect and honor were also up for grabs.

Johnson didn’t set out to fight, though. In fact, she couldn’t have played her role more by the book. When asked her name, she gives it in the most proper of forms: last name, then first name, then middle initial—just as the enumerator should write it down. Johnson has sized up the situation properly: a bureaucracy has come calling, and bureaucracies like their names directory style.

In the other poems Hughes wrote about his fictional “Madam,” Alberta K. Johnson carves out a living in a world quite like our own: one dominated by bureaucratic institutions whose offices might well send unwelcome visitors to her home. She’s turned down when seeking a job from the federal work program, the WPA. She turns out a rent collector after showing him the leaking roof, cracked windows, and scurrying rats. She ducks the phone company when it wants her to pay for a call from a no-good lover. She refuses to file a report with a Juvenile Court official inquiring after an adopted child. Johnson well knows how offices like to see a person’s name—directory style—but that’s about the only accommodation she’ll make to any institutional desire.

The poem reminds us that more is happening in this encounter than a simple act of counting. Respect and honor were also up for grabs.

The lives of the people Langston Hughes wrote about were being increasingly hemmed in by bureaucratic rules. Legal papers mattered more and more, and, thus, so did stable, official names (which, if they did not exist in a stable, official fashion, would have to be made stable and official). This is another truth the poem offers: that names don’t just belong to their bearers but also play a powerful role in the world. All births had to be documented after 1933, when all the U.S. states adopted new laws and practices. Each birth certificate held a blank for a name—a stable, official name. Migrants entering the United States needed papers now too—visas or permits or health certificates with their names on them—and those without papers became a new class of people: the “undocumented,” the “illegal aliens.” (It hadn’t been possible for a person to be “illegal” or “undocumented” throughout most of the nineteenth century, before the United States instituted immigration restrictions.) Workers now needed paperwork too, just to get and keep a job. To satisfy the child-labor provisions of the Fair Labor Standards Act of 1938, workers might need a document proving their age. The rollout of the Social Security insurance program in 1937 also required paper proofs of identity and age, and in many fields it became impossible to get a job without a stable, official Social Security number tied to a stable, official name.

As paper records waxed in power, the Census Bureau got to work, digging into its manuscript census sheets to create official documents based on prior enumerations showing a person’s name and age. In the late 1930s, a Works Progress Administration project aided the census in this arduous task by building a new kind of name index, called Soundex. The bureau knew as well as anybody that its records didn’t always spell names properly and that spellings shifted over time, and so it built an alphabetized index based on phonetics that allowed bureau officials to find any record based on the sound of a name and so provide people with the evidence they needed to get along in a document-hungry world.

Reading the data in the light of Langston Hughes’s poem, I realized that thinking about “names” could help us realize and appreciate the growing importance of bureaucracy in the lives of ordinary people, an importance not fully captured in the 1940 numbers alone. By lingering on “Madam’s” middle initial, we can appreciate how bureaucratic empowerment made the data recorded about each person more consequential and, thus, made encounters at the doorstep all the more fraught.

Johnson didn’t try to pick a fight about her name. The enumerator did. He exerted his power, the power that came with holding the pen. He took a tongue-lashing for it, but who knows what he wrote down? Johnson could make her stand, but the enumerator could write down what he wanted to.

Every name we read today on a census sheet was the result of just such an encounter. A person asserted their identity, said their name. An enumerator might accept only some part of that identity, some version of that name, and record that. All we can read is the enumerator’s scrawl—any negotiations or fights are lost to us. The doorstep encounter where the data get made almost always remains a mystery. 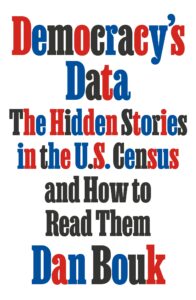 Excerpted from Democracy’s Data: The Hidden Stories in the U.S. Census and How to Read Them by Dan Bouk. Copyright © 2022. Available from MCD Books, an imprint of Farrar, Straus and Giroux, a division of Macmillan, Inc.

Dan Bouk researches the history of bureaucracies, quantification, and other modern things shrouded in cloaks of boringness. He studied computational mathematics as an undergraduate before earning a PhD in history from Princeton University. His first book, How Our Days Became Numbered, explores the life insurance industry’s methods for quantifying people, discriminating by race, and thinking statistically. He teaches history at Colgate University. 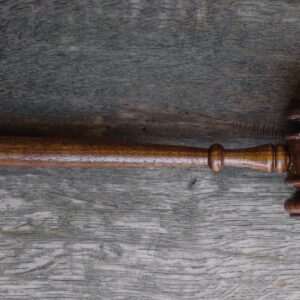 The History of Riga’s “Little Nuremberg” Trial My mother forwards me a video on WhatsApp. The app warns me that it has been forwarded many times, that it might be spam....
© LitHub
Back to top
Loading Comments...