The Author of 'The Long Walk' Meets Himself in NYC

Who has an opera made of their life?

Roman gods, doomed lovers, Nixon, and now, to our great surprise, my wife Jessie and I. As I wrote my memoir, I admit that I didn’t have an operatic adaptation in the front of my mind, so when American Lyric Theater contacted me about optioning the book, I was not so much excited as dumbfounded. It was like winning a vacation to a country you’ve never thought of visiting, like Uruguay or Botswana; Jessie pulled out her bucket list and wrote on it “inspire an opera” just so she could then cross it off.

After surprise, other emotions crept in. Doubt for sure. The Long Walk is a personal story, about going to war in Iraq as a bomb technician and then coming home a post-traumatic mess, crumbling in front of your family’s eyes. It contains a certain amount of self-inflicted pathos tailor-made for opera, but also plenty of explosions and Humvees and gun fights. How to put that on a stage without a Hollywood budget? And, if I’m honest with myself now, I was also dispirited. In popular usage, the words “operatic” and “tragic” are roughly synonymous, the required minimum bet of misery much greater for opera than memoir. So how should you take it if professionals think your life was awful enough to qualify? The war was bad, I admit, but I didn’t know my war was Wagner bad.

But those concerns disappeared once I heard the first treatment. As I have since learned, opera development usually begins with the libretto, and I attended the first dramatic reading. I had no idea what to expect, but what I got was visceral and intense and true, and my defenses were completely unprepared. I thought I had inoculated myself, professionalized the worst experiences of the book through public readings and events, but I was wrong. There is evolutionary power in the physical performance of fear, grief, joy, shouts, tears. It’s how we humans are built. The Iraqi women who had haunted me were screaming at me in Arabic only a few feet away. I had my first-and-only true flashback. I felt all the old feeling. I couldn’t watch. I put my head between my knees until it was over, and then ran outside onto Seventh Avenue and smoked half a pack of cigarettes. I quit years ago.

So when I returned to New York months later to hear a preview concert for voice and piano, my goal was only survival in a more professional state. Added stakes: This time I brought my wife. Would she have the same initial reaction? Would I? It was Jessie’s first ever trip to the city, and after the crush of midtown and an educational subway ride, we found ourselves backstage right before the night’s big performance. We chatted with the chorus, we thanked the producer, and were having a nervous drink with Stephanie Fleischmann, the librettist, when in walked the stars, our alter-egos, Brian and Jessie.

I was disarmed immediately, and any tension drained.

Brian is baritone Danny Belcher. Jessie is mezzo-soprano Heather Johnson. There is relatively little new opera produced, fewer chances for opera singers to create roles as Broadway performers do, so Danny and Heather seized the opportunity when it came, signing on for the next few years to be, well, us.

“Ok, this is going to be confusing, I’ve been calling them Brian and Jessie for two weeks. So, from now on, we’ll call them Opera Brian and Opera Jessie and you guys just Brian and Jessie.”

I heard “Just Brian,” like “Old Brian” or “Regular Brian,” prefixes last used in grade school, when the new kid in your class has your name but is obviously way cooler already.

Opera Brian is taller than me. His hair is sandier and falls in locks. His smile is easier and more infectious. He saw me and gave me that open confident grin.

“Brian, at last!” thundered Opera Brian, and he stuck out a massive hand to shake. He can probably bench press more than me, I thought.

Opera Jessie’s eyes went wide and she gave me an enveloping hug.

“It is so wonderful to finally meet you,” she said. Opera Jessie is warm and sultry and has tumbling dark hair straight from a fashion magazine.

Our cares were forgotten. It was grand and disorienting at the same time, this meeting of one’s doppelganger, and like Nick Carraway at his first Gatsby party, suddenly we found ourselves swept into their exotic world. Opera Jessie was just at the Met in Parsifal. Opera Brian was recently back from Europe, but tomorrow he was off again, to sing “the Barber.” Of Seville, I presumed, but didn’t want to ask. Opera Jessie smiles like she hides a secret, and when Opera Brian spoke his voice echoed.

I was a bomb technician in Iraq. I dismantled explosives and chased terrorists and am not easily impressed or fazed. But in the green room in New York, I was completely and helplessly charmed by my opera twin.

In the concert Opera Brian was broad and booming, and Opera Jessie, armed with several arias, stole the show. The music transcended narrative, and my book, merely unsung words printed on a page, suddenly looked feeble in comparison. Jessie and I were entranced, moved but respectably so, and at the reception afterwards I played tag-along the rest of the night. Opera Brian was like my idealized aspirational self and the older brother I never had all wrapped into one. I wanted to be his best friend. No, I already was his best friend. When you write a memoir, people think they know you, even though all they really know is what you chose to share in your book. Now I felt the same about Danny, but in reverse—I knew him because he knew me.

Such nights do not last. Opera Brian had to catch a plane. Opera Jessie left with her husband. Regular Jessie and I were left in the theater lobby with the empty wine bottles; the staff eventually asked us to leave so they could clean up and go home.

The orchestration is now complete, and final rehearsals are scheduled to begin any time. In a few weeks, Jessie and I will be attending the opera’s world premiere in Saratoga. As the writer of the book that begat it, I could (and do) feel pride in having inspired such an endeavor, excitement to finally see the full production, gratitude to the librettist and composer for the gift they are giving my sons, nerves that another flashback is coming. But mostly, we look forward to the reunion with Opera Brian and Opera Jessie, another chance to connect with our more elegant selves.

Brian Castner is the author of Disappointment River, All the Ways We Kill and Die and the war memoir The Long Walk, which was adapted into an opera. His journalism and essays have appeared in the New York Times, Wired, Esquire, and on National Public Radio. 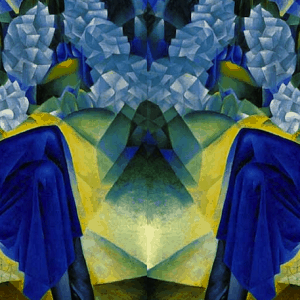 Brian Castner, writer, bomb technician in Iraq, on being one of the few people in the world to have his life turned...
© LitHub
Back to top