William J. Bernstein on the Evolutionary Origins of Collective Delusion

The spectacle of thousands of Trump supporters overrunning the Capitol building on January 6 jarred even the most jaded political observers. Just how could so many fellow citizens believe, against all objective evidence, in the delusion of a massive electoral conspiracy perpetrated by, among others, election officials, many of them Republican; a large swath of the judiciary; and, variously, communists, pedophiles, and the ghost of Hugh Chavez? (Or, as put by John Bolton, a plot “so vast and so successful that apparently there’s no evidence of it.”)

As famously documented by historian Richard Hofstadter in his 1964 essay, “The Paranoid Style in American Politics,” conspiracy theories are endemic to the American psyche. A broader historical lens, however, reveals that our nation is unexceptional in this regard. Mass delusions have popped up repeatedly around the world for centuries; in 1841 the Scottish journalist Charles Mackay described dozens of financial, religious, medical, and fashion mass delusions in Memoirs of Extraordinary Delusions (now most commonly titled Extraordinary Mass Delusions and the Madness of Crowds). The book has proven especially popular among both professional and amateur financial investors for its descriptions of the Dutch tulipmania (Mackay invented the word) and the twin stock bubbles in Paris and London of 1720; for this reason, it has remained continuously in print.

While Mackay adeptly described a wide spectrum of mass manias and intuited that humans were peculiarly susceptible to them, 19th-century biology and neuropsychology were not up to the task of identifying their wellsprings.

Given the 20th-century advances in these fields, we now have a pretty good understanding of the contagion of cockamamie ideas. In a nutshell, we are condemned to navigate the Space Age world with Stone Age minds; because of this inherent biological anachronism, man is the ape that imitates, tells stories, and morally condemns others.

First, imitation. Consider the epic late Pleistocene human migration, accomplished over just several thousand years, from the Bering Strait to South America’s southern cone. As pointed out by biologists Robert Boyd and Peter Richerson, in very rapid succession humans had to become sequentially adept at building kayaks, hunting bison, and fashioning poison blow guns. The normal evolutionary hard-wired processes that underlie most animal skills would not suffice for such rapid adaptation; at some point in the development of the species, imitation became the essential human skill. Once one tribal member proved adept at building a kayak or blow gun, the rest simply imitated him, leading Mother Nature to select for those who imitated best.

Our hunger for narratives, which we prefer over data and analytical rigor, is also no great advantage in a modern post-industrial society that rewards critical thought.

Similarly, evolution also selected humans who narrated and comprehended the best. Our megafauna-hunting forbearers didn’t issue geometric vectors to each other during a mastodon pursuit; rather, one told his partner, “You go right, I’ll go left, and we’ll spear the creature from both sides.” We are not Spock-like processors of facts and data; rather, we love to hear and tell stories.

The human proclivity to condemn others hardly needs explanation at all; in a Hobbesian state of nature, the ability to empathize with members of one’s own tribe and demonize and disparage everyone else enables your tribe to more easily commit the wholesale murder of other tribes, a useful survival skill indeed in an unforgiving hunter-gatherer environment.

While these three essential human characteristics imparted survival value on the African savannas, they can prove profoundly dysfunctional in a technologically advanced global village of instant communication that demands exquisite critical thinking skills.

Our imitative tendencies can manifest in even the most banal ways: as we all know (and has been proven scientifically) yawning is infectious. More seriously, we absorb just as unconsciously the belief systems, no matter how mistaken, of those around us, which propagates financial bubbles and religious end-times delusions, such as the belief shared by hundreds of thousands of Americans that the world would end on October 22, 1844. Or, for that matter, the belief that Donald Trump was the victim of a conspiracy so dastardly that it snookered all three of his Supreme Court nominees.

Our hunger for narratives, which we prefer over data and analytical rigor, is also no great advantage in a modern post-industrial society that rewards critical thought. Donald Trump plays this Stone Age preference for narratives over data like Horowitz played the piano. When asked about vaccines during a 2015 primary debate, Ben Carson, a renowned neurosurgeon, briefly summarized the overwhelming safety data; Trump responded that “autism has become an epidemic” and then related the story of the “beautiful child” of an employee who developed autism after a vaccination. Wrote one journalist, “Trump knows what he’s doing, because a story like the one he told is more affecting and persuasive than just presenting the facts.”

One final point: Our proclivity towards condemnation of those outside our tribal confines, while useful in a deadly, competitive hunter-gatherer landscape manifests in the modern world as xenophobia and racism, which proves highly dysfunctional and unjust in a mobile, interconnected, and apocalyptically armed world.

Fortunately, at least on a historical time scale, the half life of mass delusions is blessedly brief, and at this fraught juncture in our history we can only pray for the truth of Mackay’s most famous pronouncement that “Men, it is said, think in herds; it will be seen that they go mad in herds, while they only recover their senses more slowly, and one by one.” 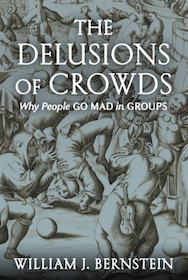 The Delusions of Crowds, by William J. Bernstein, is forthcoming from Grove Atlantic in February.

William J. Bernstein is a neurologist, financial theorist, and historian whose books include A Splendid Exchange, Masters of the Word, The Delusions of Crowds, The Birth of Plenty, and The Four Pillars of Investing. He is the co-founder of the investment management firm Efficient Frontier Advisors, and has written for publications including the Wall Street Journal and Money magazine. He was the winner of the 2017 James R. Vertin Award from CFA Institute. He lives in Oregon.

Yiyun Li on the Brilliance of Bette Howland 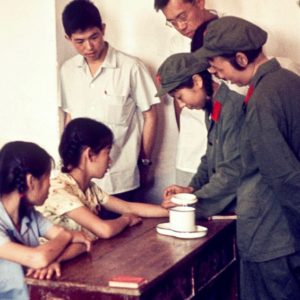 My assignment was to offer a survey course on the history of English literature in northeast China. I was paired with a young...
© LitHub
Back to top
Loading Comments...