What If I’m Just a Minor Writer?

Karl Taro Greenfeld: Not Every Author is Destined for Greatness

I’m not who I was supposed to be. No aspiring writer sets out to be a minor writer. I didn’t dream of growing up and writing books that sell modestly, are received quietly, and reviewed indifferently. I was indoctrinated by hours spent curled on the sofa and in bed at night reading great writers and feeling, somehow, in their presence. Whoever it is who first gets his or her hooks into you, Jane Austen, Saul Bellow, J.D Salinger, or, in my case, Jack London and then Joseph Heller, it feels as if he or she understands you, from thousands of miles away and even centuries ago. To become such a writer, a so-called major or important writer, that becomes the dream.

Yet not all of us make it. For me, there was no map to becoming a major writer. (There might be one now, more on that below.) I read the lives of writers and how they came to their majesty and they were impossible to track. Jack London worked at a cannery. Joseph Heller wrote advertising copy. Harper Lee took airline reservations.

I was an awful high school student, earning Bs in English, a disappointing college student, even managing to fail a writing class. Perhaps I should have quit there. Still, you can’t shake the dream. And anyway, Charles Dickens, the definition of an important writer, never finished high school. In the late 80s, the aspiring writers I knew took internships at magazines. Instead, I moved to Japan where I taught English and then lucked into a job as a newspaper reporter in Tokyo at the English language edition of a prominent Japanese newspaper. I wrote prodigiously: film reviews, book reviews, interviews with visiting dignitaries. All of this, I imagined at the time, would one day be of interest to the biographers who would inevitably search out my earliest work and find in it flashes of the brilliance to come. I lasted less than a year at the paper. “Write without pay until someone offers pay,” Mark Twain advised, “If nobody offers within three years, the candidate may look upon this as a sign that sawing wood is what he was intended for.” Inside of 12 months I was publishing in important American magazines.

“We all dream the same dream, to become important writers. Most of us never achieve it. But I like to believe the collective dream of the thousand is necessary for the one to emerge.”

I returned to the United States, contributed to any glossy magazine that would have me, and began to make a living from writing. When I was 29 I published my first book. That collection, Speed Tribes, was savaged in The New York Times. Perhaps I should have known it then: starlit literary careers do not begin with the Times describing your work as “ringing hollow.” There I was, a writer, yet I was beginning to get the sense I would not be a writer as successful as those who had inspired me. But how do you know when a promising career turns sodden with mediocrity? I can’t point to the moment or ascertain the cause of my being a minor writer. It could be a lack of talent. I could be bad luck. Perhaps a combination. I’m not asking for sympathy or pity. I am merely identifying a common enough condition: I didn’t become what I dreamed.

Today, there may be a map to follow. Work hard in college and join an MFA program. The merits of the MFA system are widely debated and not relevant to this discussion, save in one area: MFA programs excel at producing minor writers. That’s not to say they don’t also produce major writers, but for each there must be many minor writers. Not every workshop is filled with eight future National Book Award winners. But if each of those students keeps writing, goes on to teach, and keeps publishing, well, there you have it, perhaps eight minor writers.

Unlike the athlete, the astronaut, the ballet dancer, no general manager or director comes to tell a writer he or she is not good enough. So I persisted, publishing steadily in journals high and low. I’ve been lucky enough to make a living at writing for nearly three decades, working on staff at some well-regarded magazines, receiving—and then failing to earn back—some generous advances. I’ve won some small prizes, been recognized in a half-dozen “Best American” anthologies, found work as a television writer, and will soon publish my ninth book.

There is no shame in being a minor writer. Some of my favorite writers were, in their day, considered minor writers: Nathanael West, Charles Bukowski, Mikhail Lermontov, Blaise Cendrars, Flann O’Brien, and even Gertrude Stein. It is an honorable way to make a living. Certainly I’ve done less damage to the forests of America than my better-selling peers. And while a major writer can be reassessed and reduced in stature in posterity, for a minor writer, there is only potential upside. (See Nathanael West.) But while I am not yet, as the pitcher Frank Sullivan of the Boston Red Sox once put it, “in the twilight of a mediocre career,” being a minor writer does carry with it the stigma of failure. I dreamed of writing novels that transcended time, that perhaps would someday convince a boy or girl that he or she should become a writer. Like a mother spider who births a thousand spiderlings for only one to survive to motherhood herself, perhaps this is how writers as a species survive. We all dream the same dream, to become important writers. Most of us never achieve it. But I like to believe the collective dream of the thousand is necessary for the one to emerge.

Now, as a minor writer, in embarking on each new book, there is a certain amount of self-deception required. Past results are no guarantee of future performance, yet in book publishing they are pretty damn reliable. To start a new novel, even at 51, requires that I be as earnest and hopeful as I was setting down the first few fragments of stories as an anxious, would-be writer at 16. That never changes: the summoning up of the nerves to have another go. I continue because the dream never really dies. I convince myself that this next book will be the one that elevates me, that the critics will suddenly take notice, that at a venue that matters a voice will finally announce me. My accumulation of words will be deemed of consequence. I will be anointed a major writer.

Perhaps it is self-deception, but I believe my new novel is my best work, certainly my finest novel. I’m proud of it in a way that I haven’t been of any of my previous books: this one, True, anachronistically, is my least polished book, my most emotionally honest and open. After decades at the craft, I found a simple story, of a girl chasing a dream, to be among the best in the world at her sport. She fails. And then finds happiness in a smaller version of that dream. Sound familiar?

Karl Taro Greenfeld is the author of nine books, including the novel Triburbia, the much-acclaimed memoir Boy Alone; NowTrends; China Syndrome; Standard Deviations; and Speed Tribes. His most recent novel is True. Greenfeld's writing has appeared in Harper's, The Atlantic, The Paris Review, Ploughshares, Best American Short Stories and The PEN/O Henry Prize Stories among other publications. Born in Kobe, Japan, Karl has lived in Paris, Hong Kong, Tokyo and Tribeca.

Read 13 of the Best Literary Interviews from Interview 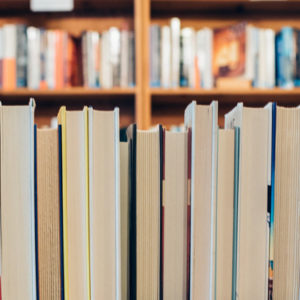 As the nation’s only nonprofit distributor, Small Press Distribution is dedicated to getting small press literature to the people...
© LitHub
Back to top