Kim Beil on Building a Habit of Curiosity

This spring I started writing about every book in the library. Not a large library, nor a public one. Just a trunk full of 19th-century schoolbooks that my mother found in an old farmhouse in the 1960s. There are pasteboard readers and parsers and dictionaries, a few arithmetic texts and leather-bound volumes on public speaking. Nothing special, owned by no one famous.

My plan had been, at first, to photograph the books and then sell them on eBay. I took the pictures, but couldn’t bear to sell the books. Maybe they’re cursed; once you’ve become their caretaker, you can’t relinquish them. Their worm-eaten leather and dog-eared pages smell too much like mystery. All the sensory pleasures of archives, closed to me for a year and a half during Covid restrictions, were suddenly here, in my own home. I bought a bookshelf on Craigslist and started a simple project: write a short essay about every book in the library. The books are a three-dimensional syllabus. Through them, I’ve learned about rare book terminology, about the public school movement, the scandalous introduction of the waltz to the United States, the tradition of oratory, almanacs, American spelling, autograph albums, itinerant singing masters, and more. 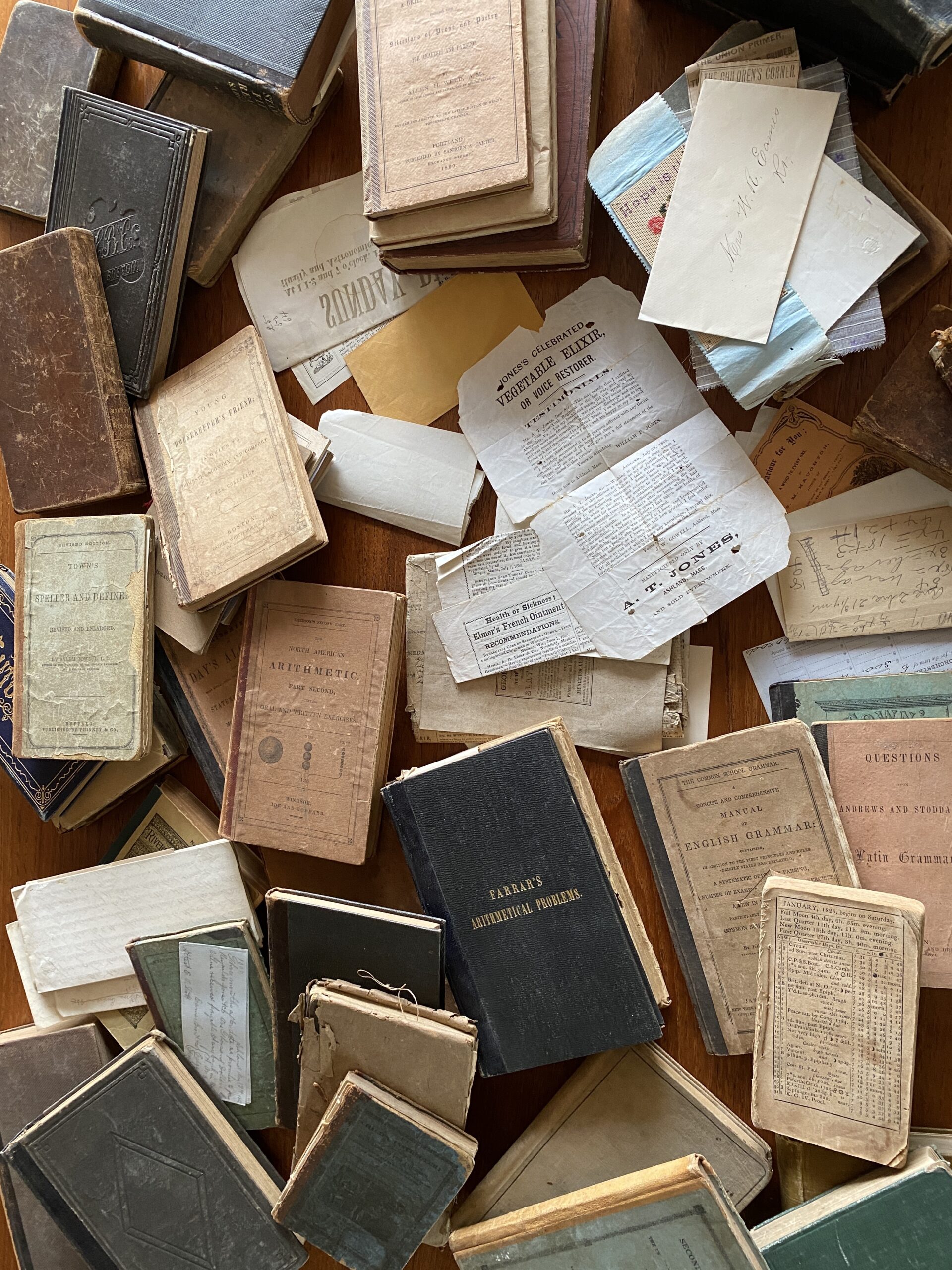 Annie Dillard recommends that writers keep a schedule, what she calls “a net for catching days.” A project is even better than a schedule. A project is also a plan, pointing forward in time and pointing out what to look for along the way. A project is an engine for ideas.

Herewith, some lessons on the value of having a project, gleaned from my own project:

Chapter 2. This story begins with chapter two, because that’s exactly the kind of jumpstart that a project provides. By definition, a project is something that looks to the future. It projects. As any writer will attest, research can be thrilling, even addictive. The possibility of discovery is an ever-present lure, the stuff of fables and prizes and hand-drawn maps. Research can also be a never-ending story, as many long-stalled graduate students will testify. Retreating from the world of other peoples’ words into the echo chamber of your own is daunting. That moment, when you finally tip the scale from research to writing, can take years and an earth-shaking worthy of Richter.

The beauty of a project is that writing is built into it. When I draw a book off the shelf, I automatically have a place to start. Oh! I’m writing about this book, I say to myself with relief. A project gives you purpose.

Chapter 1. Now we return to chapter one. A project may be about the future, but it can also help you look back on familiar things from a new perspective. I’ve always been charmed by Walter Benjamin’s essay on book collecting, “Unpacking My Library,” but it didn’t feel personal until recently. I don’t have first-editions or association copies on my shelf, but the constellation of wood dust and paper scraps is the same in my library as in his. Benjamin admits that through his books, the book collector “proves to be speaking only about himself.” Why did these old books speak to me now, in the spring of 2021, when they’ve been accessible to me my whole life? Last year when the world shut down, tangible things seemed to evaporate in a cloud of hand sanitizer. I was separated from my family by an impassable distance. I longed for connection to something real, something that had endured. The wear on these books, their elegant ownership signatures, the scraps of paper stuck between their pages all pulsed with life. I longed to reanimate their history—and my own. The project reveals you to yourself.

Chapter 3. Learn the lingo. Meet the experts. The first book I pulled from the box was a tiny edition of Milton from 1805. That’s the only way I knew to describe it: tiny. But, actually it is a quadragesimo-octavo or forty-eightmo, named for the number of its pages that could be cut from a standard sheet of paper. Naming is the first step towards knowing. 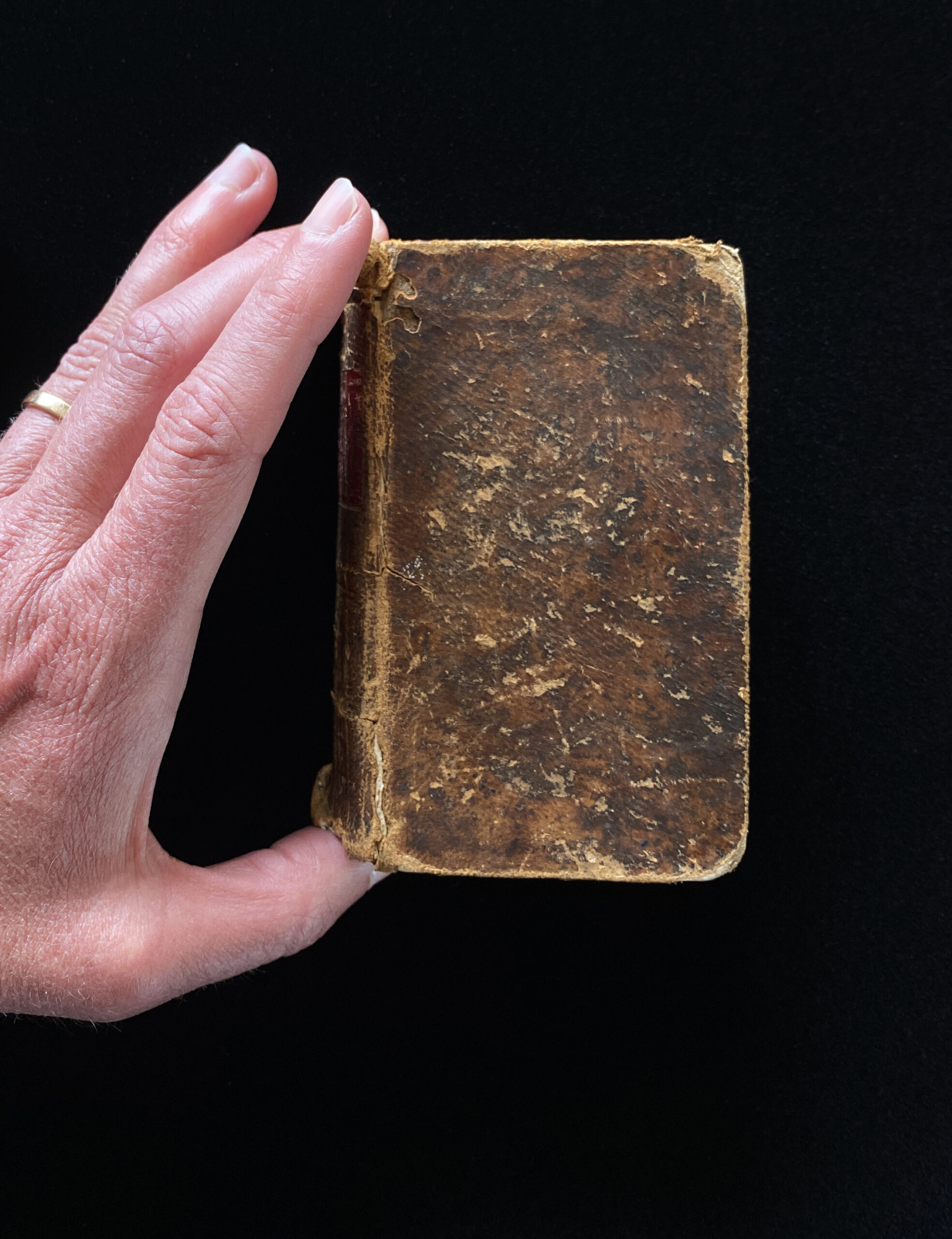 Lately I’ve veered into the world of 18th-century wood-engravings and a garden of knowledge has grown up before my very eyes. Librarians and curators send links and images in response to my amateur inquiries, forwarding me to other experts if they don’t have the answers. With their help I’ve traced the origin of several of the illustrations in The Child’s First Instructer [sic] to the first American wood engraver, Alexander Anderson, and from him back to John Bewick in England. Along the way, I’ve learned about Peter Fleet and his son, Pompey, enslaved Black artisans who created some of the earliest printed illustrations in Colonial New England. A project is like a microscope for curiosity. The closer you get, the more you see. 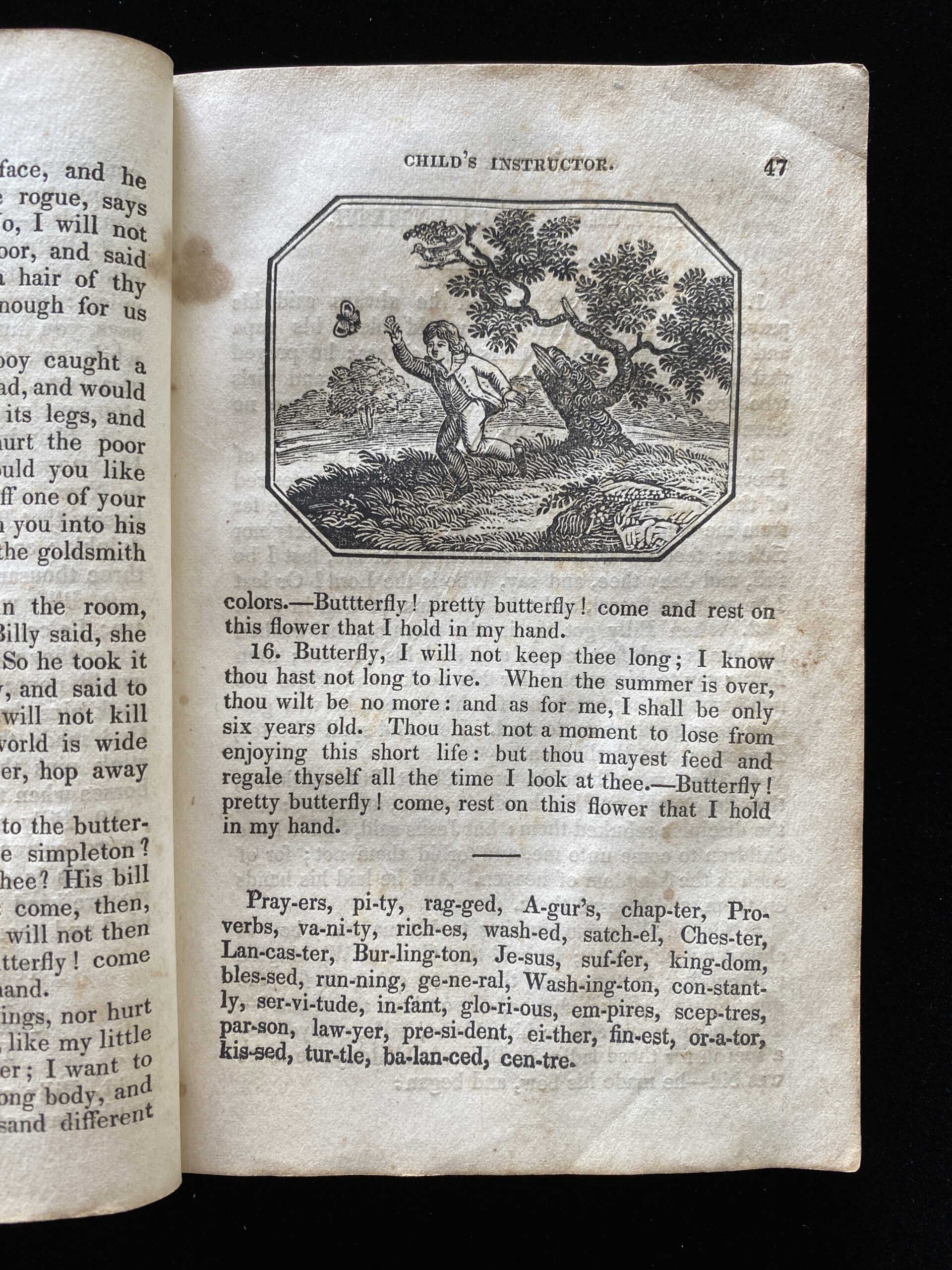 Chapter 4. Accidents are meaningful. Just when I thought I couldn’t possibly write about another volume of the National Reader, something fell out of its pages: a newspaper advertisement for “The Most Popular Writer of the Day for Boys and Girls.” Clearly, the book’s owner wished he was reading something else, too. This bookmark led me to other things filed in the Reader’s pages: a small engraved portrait, a scrap of emerald silk. And this, an anathema, or book curse: “Steal not this ^book for fear of strife/ For the owner carries a big/ Dirk Knife.” The project can take you places you’d never think to go on your own. 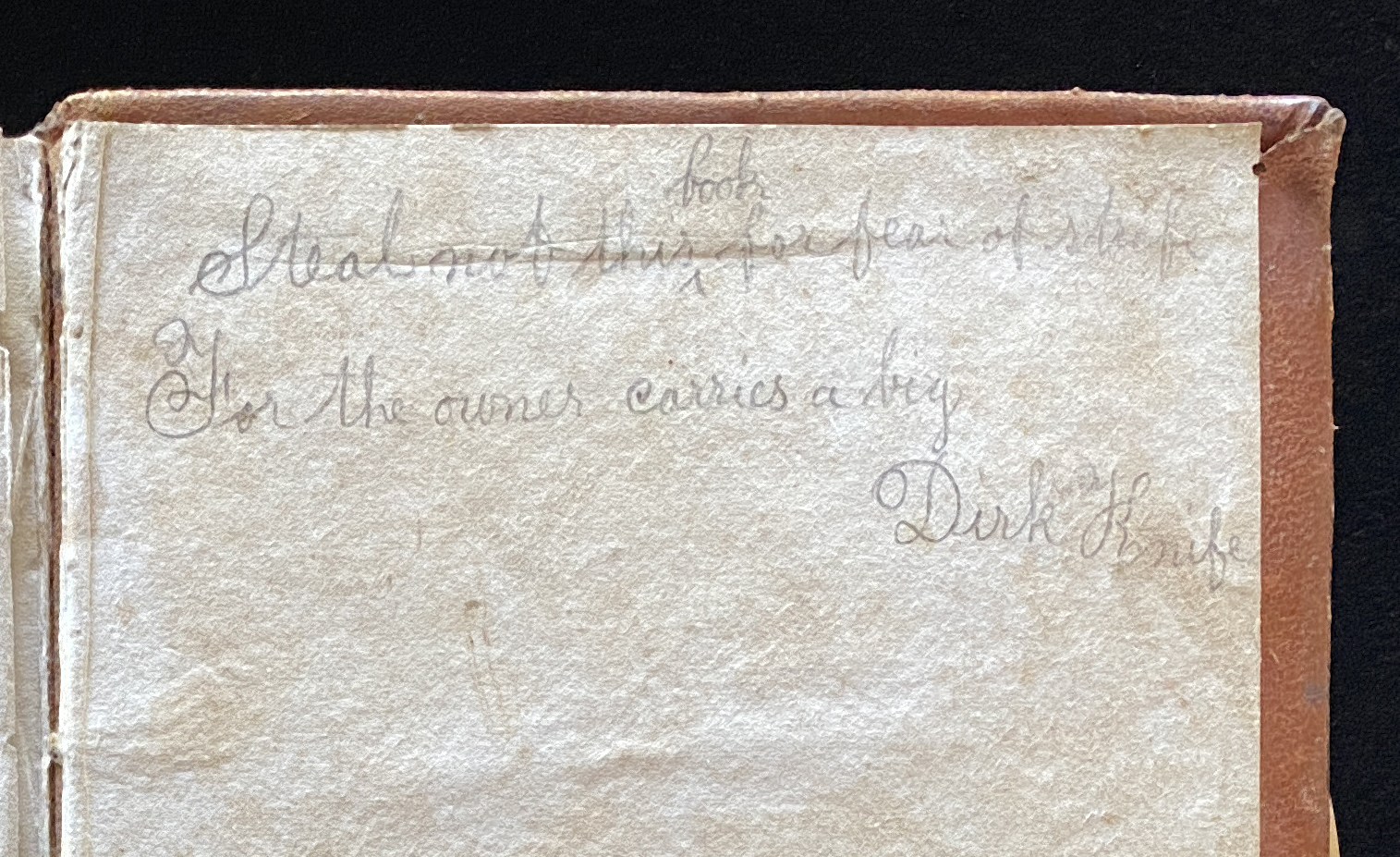 Chapter 5. Do the boring stuff. In my project, this means counting the pages, tracing the genealogy, reading every page in an 1827 pronouncing dictionary. I think of it as knocking on the doors of the idea in order to find my way in. Maybe I’ve made it sound too easy thus far. Sure, you have a project and, therefore, a place to start. But what are you going to say? With a project, you develop a few strategies, like those above: read other essays, talk to experts, learn the lexicon. Sometimes it’s what’s missing that’s important, like the final period chewed out of my copy of Milton. Or, the “Reward of Merit” entombed in the pages of A Pilgrim’s Progress, saved for decades by a father after the death of his son. Writing can fill in the empty spaces.

Chapter 6. Objects give substance to ideas. Find some way to hold your project in your hands. Pick it up, turn it over, see how the light strikes it. Investigative journalists follow the money. I follow the wear patterns. What’s well-used was once special. On my first pass through the library I didn’t notice the 1823 copy of Noah Webster’s American Spelling Book, popularly referred to as the blue-back speller. Over two centuries, its cover has faded to a wooly gray. Inside the chipped and broken boards is the owner’s name: Roxanna.

Eventually she would be mother to the boys whose books make up the bulk of this library. Like generations of women before her, Roxanna was probably responsible for the first years of her children’s education in the home. In this way, the speller points to the frontispiece in another book: The Child’s First Instructer [sic]. I imagine Roxanna as the mother who has put down her sewing to teach her children how to read. 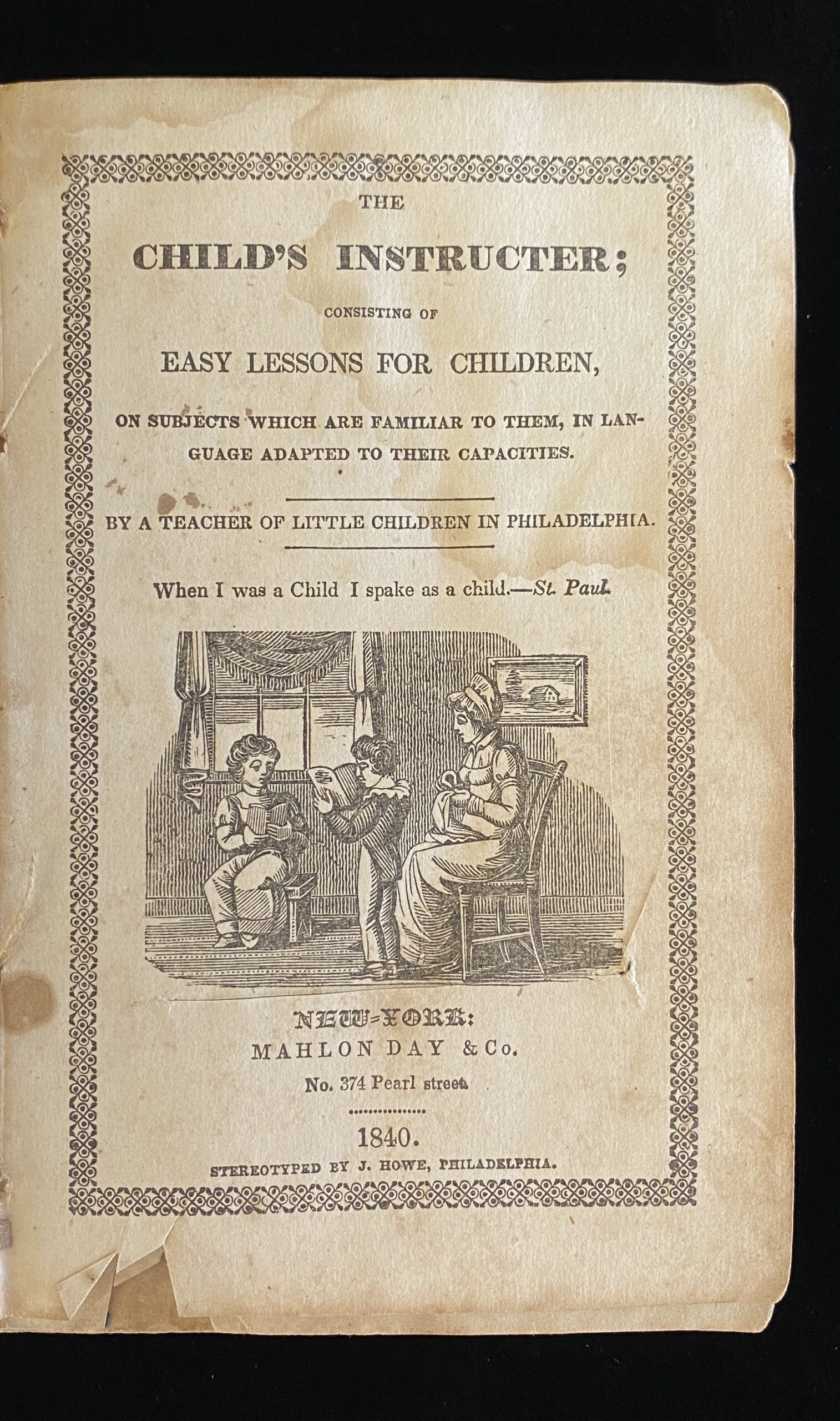 Afterword. Here’s the secret: it’s not the project that’s important, it’s the practice. You’re building a habit of curiosity. You learn that if you can write about yet another parsing book, then you can write about anything. And not just that, but you can find anything interesting. An octogenarian photographer I know says that when he holds the camera up to his eye everything becomes amazing. The wonder hasn’t ceased for him. Having a project is similar. It intensifies everything you see. It inspires connections to things you already know and projects you towards things you don’t know yet.

Kim Beil teaches art history at Stanford University, where she is the Associate Director of ITALIC, an interdisciplinary arts program for first-year students. Her writing on modern and contemporary art has appeared in Art in America, Photograph, and Sculpture magazines and her book, Good Pictures: A History of Popular Photography, is available from Stanford University Press. She thinks of Instagram as research; you can find her @Kim.Beil, and @kalophile on Twitter.

Learning About Sex from Samantha Jones 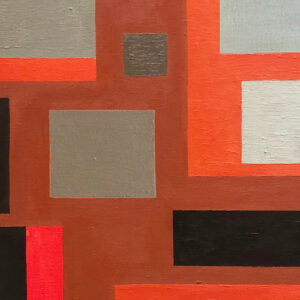 Reading the letters of someone who has passed is always a delicate matter. And writing about their once-written words is to exhume...
© LitHub
Back to top
Loading Comments...