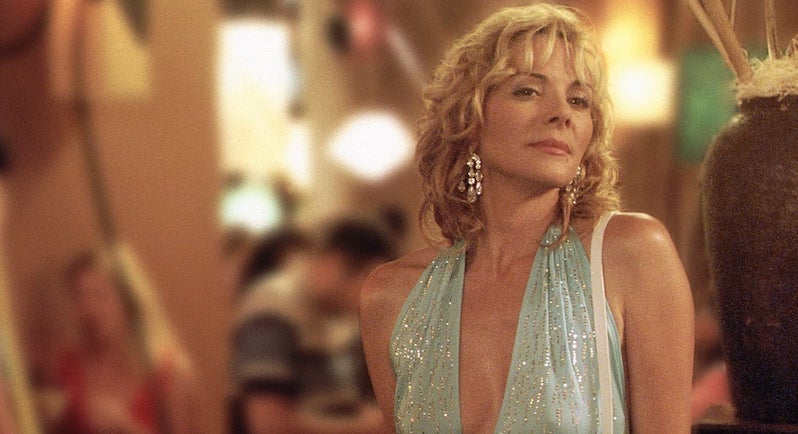 Learning About Sex from Samantha Jones

One day when I was a sophomore in high school, I went to my friend Maddie’s house after school for the usual Thursday afternoon joint and sexually charged TV-watching session. Usually, we nodded towards our shared inability to just make out already by picking a TV show that we could ignore, while we stuck our feet in each other’s laps, tickled each other’s armpits, and engaged in other behaviors of plausible deniability. If a jury of our peers had wandered into the room and seen us together, they couldn’t have identified us as gay beyond any reasonable doubt, or so we thought. “Your honor, the TV is clearly on and tuned to the Home and Garden network,” I imagine myself saying now. “Were we pillow-fighting and comparing breast sizes? Certainly, but is that not our right as heterosexuals, as we enjoy a little hard-earned after-school entertainment?”

In any event, on this day, Maddie had other ideas. “Have you ever seen Sex and the City?” she asked, rolling a joint. (I could not, and still can’t, roll a joint to save my life—when people ask me why, I mask my embarrassment at my own ineptitude by laughing and explaining that there are always men around.)

“It’s about four women in New York who have a lot of sex. You’ll  like it.”

In these years, I had something of a reputation because I’d had sex, barely. Maddie was still an everything-but girl, and therefore looked to me as a font of sexual advice. She’d once asked me why I’d done it, and I had told her, somewhat accurately, that I’d done it because I wanted to so badly. Which was technically true, but more to the point, I’d been in a relationship with Mark Friedman, who had done it before; I didn’t like the idea of what it would say about me if he didn’t do it with me, too. By this point, that relationship was over, but I’d deliberately developed experience in all the “main” sex positions, as if hoping to pad my résumé. Still, despite my reputation, nobody else had tried to have sex with me, no matter how much I flirted (by which I mean, no matter how often I put on my very shortest skirt and walked around the mall in front of boys).

What could I do? I had a reputation to uphold as the sex-haver in the friend group that Maddie and I shared. I took the completed joint from her and said, “Let’s watch it.”

I will always remember that the first episode of Sex and the City I ever saw was the one about frenemies, when uptight Charlotte and libertine Samantha each get a taste of their own neuroses and realize how much they need each other. It’s a strong Samantha episode, and from that day forward, after watching Samantha squeal in glee over Charlotte’s sexual triumph with her new husband, I had a new identity.

I had a reputation to uphold as the sex-haver in the friend group that Maddie and I shared.

Samantha Jones vamped and innuendo’d across the screen, seducing men with compulsive sexual vigor. Nearly every week, she had sex with someone new. She worked hard and played hard, à la a mid-’80s finance yuppie; she was libidinous to the point of satyriasis; she was loyal to her friends and impossible to pin down romantically. Strong-willed and straightforward, she butted heads sometimes with her friends, particularly Charlotte, though all three of her besties expressed the wish that she’d tone it down a bit once in a while. Overall, though, she was critical to the group’s dynamic. She could always be counted on to recommend that her friends look out for themselves and stop inconveniencing themselves for some guy who probably had a little dick anyway. She told her friends that they were fabulous, often and loudly and so enthusiastically that there was nothing to do but believe it.

She completed an evolution that I’d been trying to tie off for a while. People already thought I was a slut, but she taught me that I could be proud of it. She taught me that I didn’t need to waste my time preening for boys who might never drum up the courage to speak to me. I could claim them; I was in charge. I’d never realized that all I needed to do when I was sexually interested in somebody was tell them so. But Samantha made it look so simple. She had sex “like a man,” in the show’s parlance, which is to say that she enjoyed dozens of partners’ company for casual encounters and then moved on from each one seamlessly. That was who I wanted to be. Powerful, forward, and fundamentally unrejectable.

Part of the reason I was so desperate for a Samantha figure was that, simply put, my breakup had left me lonely. I call it a breakup because even now, it stings to use the more honest term: I was dumped, unilaterally and unkindly. It’s one of those memories that lives in anxiety-inducing color to this day. I couldn’t tell you my mother’s cell phone number if you paid me, but do I remember what I was wearing and where I was sitting and, God help me, the little-girl way that my ass hung off the edge of the school bus seat because I hadn’t taken my backpack off my back before sitting down on the day Mark Friedman dumped me? Yes, okay? Yes, I do, and when the bellows of my lungs expels its last gasp and the last of the color drains from my face, I’d wager that’ll be the memory that God fires off in my brain before pulling the plug on the whole stupid mechanism.

I’m uneasy writing this breakup scene, which tells me that I must. So I was hunched over in my seat, 15 years old as all get-out, flicking through The Great Gatsby, when Mark slid in next to me. He and I shared one of those excruciating erotic connections that’s only possible before teenage hormones have settled into adult sexual patterns; we made out chronically, at length and with no regard for the world around us; his smell, a pungent workman’s odor of unwashed flannel and greasy hair, makes me wet to this day, anytime I chance to smell it. So Mark tumbled into the seat next to me, legs akimbo, all teenage-boy swagger and gangliness, and I perked up because I believed that we would make out as usual.

Samantha had sex “like a man,” which is to say that she enjoyed dozens of partners’ company for casual encounters and then moved on.

Had I seen it coming? Had the flavor of our shared saliva soured of late; had I noticed him paying an untoward quantity of attention to his tomboyish friend Doreen? Yes, but also no, because I had seen it coming and therefore I’d asked him approximately twice a day for the entire month whether he planned to dump me. I didn’t mind, I assured him; I just wanted to know. (I would have minded, obviously, but even then I was hip to the little subterfuges one must conduct in the pursuit of that rarest treasure, the honest answer.) Naturally, though, he said no every time. What was he going to say? “Yes, I’m planning to dump you, but until then we might as well fuck a few more times”?

So, he dumped me. And my heart shorted out for a moment, but I kept calm, and asked, “Can I kiss you goodbye?” Very adult, very comme ci, comme ça.

“Oh no. No, we’re done.” And this is what kills me: we’d taken the same bus every day for the whole time that we’d attended the same school, but he disembarked the bus, and trotted off to do who knows what. Sure, he’d been unhappy, but did the breakup need to be effective immediately? Couldn’t we let the air out of the relationship with a round of post-breakup making out on the way home? (Incidentally, Mark has since apologized for all this in a way that heavily suggests the presence of a 12-step program in his life, which, mazel tov, I guess.)

I still had The Great Gatsby in my hands, and I remember thinking: Drop the book dramatically to the floor. So I let it tumble from my grip, believing that the desperation of this “involuntary” action would draw attention to me, which it didn’t. And then I burst into tears, which did draw attention to me or, more specifically, whispers. Everybody knew that Mark and I had been having sex, which wasn’t unheard of for a pair of 15-year-olds  at our school, but was still unusual enough to put me on the social radar now that I was crying over him. People’s whispers were neither kind nor sympathetic. Whatever they said, they were really saying, I told you she was a slut, I told you she was a slut.

Fast-forward to that day on Maddie’s couch, and I realized that an alternate path was available to me. I didn’t need a boyfriend just for sex. Sex was all around me! It lived in every single person in the world, and could be wrangled with sitcommishly little effort. All Samantha had to do was cock an eyebrow the right way in a crowded bar and she’d be getting dicked down in the very next scene. I was a realistic little slut, and knew that I’d have to expend more effort than that, but in reality it was not a lot more effort. Men, I realized, liked me. And then I was upset, because who knows how long they’d liked me in the ten months that I’d wasted on Mark, who I wasn’t going to marry after all. I had a lot of lost slutty time to make up for.

When I adopted this attitude that day, I didn’t yet realize that one thing was missing from the show’s vision of Samantha’s sexuality. In order for the Samantha Jones lifestyle to be fun, the men I incorporated into its pursuit would have to care whether it was fun for me, too. 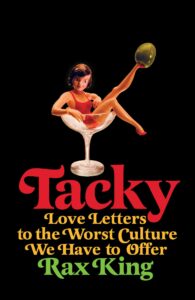 From Tacky by Rax King. Copyright © 2021 by Rax King. Published by arrangement with Vintage Books, an imprint of The Knopf Doubleday Group, a division of Penguin Random House LLC.

Rax King is a James Beard Award-nominated writer and host of the podcast Low Culture Boil. Her writing can be found in Glamour, MEL Magazine, Catapult, and elsewhere. She lives in Brooklyn, New York, with her hedgehog and toothless Pekingese.

On Grit: How Cheryl Strayed Learned to Ride Into Battle 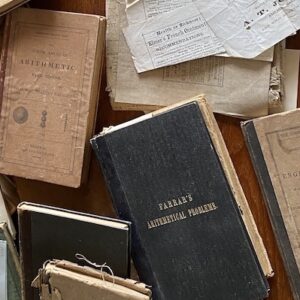 This spring I started writing about every book in the library. Not a large library, nor a public one. Just a trunk full of 19th-century...
© LitHub
Back to top
Loading Comments...