Not Shockingly, an Awful Lot of Men

I don’t keep a diary, but I do save two kinds of reading lists. One in an app is labeled “Books to Read.” It contains hundreds of titles, loosely organized by genres. The other has the titles of all the books that I have read since 1991, the year of my first hard drive.

But tucked away in a file cabinet is a faded manila folder. It holds typed pages of every book that I finished since I began keeping a list in the mid-1960s, a quarter of a century before I got that hard drive. There are also faded mimeographed pages, the mimeograph machine being the ancestor to the Xerox copier. They contain handwritten good reading lists from my junior high and high school teachers. I checked off nearly half the 52 titles on one. There are also five pages torn out of How to Prepare for College.

I may not have a diary, but, looking back at more than half a century of my book lists, I see the path to my future as a historian unfolding.

In junior high, I was fascinated by stories set in other eras and distant places, worlds far away that I was eager to discover and hoped one day to explore. Historical fiction introduced me to revolutionary France (A Tale of Two Cities), imperial China (The Good Earth), Tsarist Russia (Crime and Punishment), and Jewish history.

I learned about the Holocaust and the founding of the State of Israel from Leon Uris’s Exodus and Mila 18. I read James Michener’s 1,100-page tome The Source twice. Using the prism of an archaeological dig in the young state of Israel, Michener introduced me to the thousands of years of Jewish history.

In college and then in graduate school, as a historian-in-training, I graduated from historical fiction and began reading reams of Jewish history by men like Columbia University Professor Salo Baron and literary critic Irving Howe. I also read the then-canon of modern Jewish literature, including the triumvirate of 20th-century Jewish Nobel laureates Shmuel Yosef Agnon, Saul Bellow, and Isaac Bashevis Singer.

Turning over the pages in my faded manila folder today, what most astonishes me is the scarcity of books by and about women. How to Prepare for College recommended 122 male authors and only 13 female writers. Back then I would not have known to count George Eliot among the ladies. Only 3 of the 22 books that I checked off on “Good Reading” were written by women.

My guides to good reading date to the 1960s, long before feminist literary criticism demanded a reevaluation of the literary canon and well before works like Sandra Gilbert’s and Susan Gubar’s The Madwoman in the Attic challenged the male-defined literary histories of the few women, like Jane Austen and the Brontë sisters, who had made it onto my recommended books lists.

But looking closely at my rosters of books read, I see a slow path to women’s words unfolding. There were years in graduate school when I read only a single title by a woman. Of course, we read The Memoirs of Glückel of Hameln (1646-1724), but, back then, no one asked how gender had shaped her life, although I do remember wondering how she had managed 14 children, a business, and writing.

Over time, I gravitated to more books by and about women. I read Eleanor Flexner’s Century of Struggle about the woman suffrage movement and Sheila Rowbotham’s Hidden from History: 300 Years of Women’s Oppression and the Fight Against It. I found Vera Weizmann’s memoir while studying her more famous husband, the Zionist Chaim Weizmann. Thanks to historian Alice Kessler-Harris’s reissuing the novel The Bread Givers, I discovered its author Anzia Yezierska’s protest against a Jewish patriarch’s selfishness and injustice to his daughters.

Eventually, my book lists reveal a major turning point in my life. In the summer of 1985, I had just finished my third year as an assistant professor of Jewish Studies. I was working on my first book but managed to read 21 others summer. Fifteen were by women, the first time that female writers dominated my list. Three were by the champion of the immigrants, Mary Antin, author of the 1912 memoir The Promised Land. I was reading her because her first book, From Plotzk to Boston, published in 1899 when she was in her teens, describing her voyage from a Russian shtetl to an American seaport, was about to reissued, and I was writing its introduction. I don’t think that I grasped this then, but that summer marked not only the first time that I read mostly books by women, but also the first time that I wrote Jewish women’s history. It would not be the last.

Pamela S. Nadell holds the Patrick Clendenen Chair in Women’s and Gender History at American University. Her books include Women Who Would Be Rabbis, a National Jewish Book Award finalist. She lives in North Bethesda, Maryland. Her new book is America’s Jewish Women: A History from Colonial Times to Today (W.W. Norton). 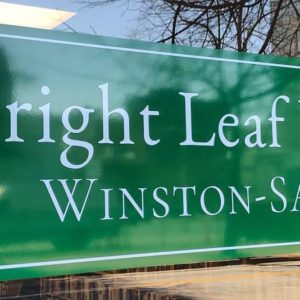 Bright Leaf Books in Winton-Salem, NC closed early last month. It was just a small bookstore in a small city, but it was my bookstore...
© LitHub
Back to top