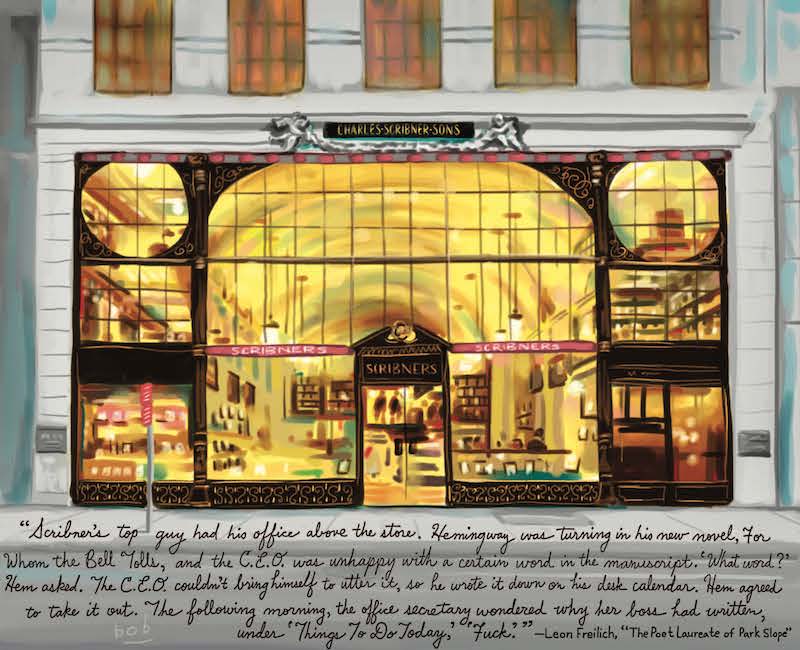 What I Learned After Illustrating 75 Bookstores from Around the World

Bob Eckstein on Brushes with Tragedy, Community, Resilience, and Magic

For the past two years, I’ve been talking with bookstore owners and employees from around the world for a book illustrating 75 beautiful bookstores. Collecting interesting stories from each shop also afforded me the chance to meet some of my heroes, as well as countless great thinkers and artists. The finished book includes three things that I love: painting, bookstores, and name-dropping. I’m done for now, but I already miss it.

A byproduct of the project was insight into the current state of bookstores. I listened to the histories of hard-working family businesses. I heard their ups and downs, their aspirations and achievements. Some days required the patience of a saint as I spent hours hearing about the importance of the store cat. I collected a fair amount of funny stories from comedians like Robin Williams, Dave Barry and Monty Python’s Michael Palin. Roz Chast and Patricia Marx hilariously recounted their heckling during the Q & A of a book event. Rick Ketrba, the manager of Chicago’s Barbara’s Bookstore, was previously a comedian, and I spent an amusing afternoon hearing his snappy comebacks to customers.

The stories from owners were usually the most moving. Often, I was so inspired by the bookstore I had visited that I couldn’t wait to get home to illustrate it.

I heard how bookstores brought communities or, sometimes, two people together for life. There were times when an owner began to share their story and, by the end, would be in tears. The manager of Shakespeare’s (the one on Broadway in NYC) cried while she checked out a customer and told me that her store was becoming a Foot Locker the next week. One bookstore sent me a gut-wrenching apology for their tardy reply—sorry, they were busy going bankrupt.

I had started with a list of a 150 shops, from which I collected over 300 anecdotes. Perhaps naively, I thought my book could raise awareness for independent bookstores. If I’m being totally honest, I still have that grandiose notion. But I’m happy to report that many bookstores don’t need any help from me. Many stores are currently expanding or having their best year. I wish I could say that there was a single solution, but the common denominator seemed to be a very robust event calendar and integration into the neighborhood: live music, live readings, live discussions. Bookstores that double as community centers and cultural hubs make themselves invaluable on Main Street.

The bookstores that went bankrupt during the making of the book blamed Amazon and the online market’s price slashing. Customers made a habit of using physical stores to browse, shop and scan, only to purchase online later. This has been a long-standing problem. How to make a bookstore more than a library or restroom? Amazon’s business model is another discussion, but I would be remiss to not say that European bookstores attest that their health is largely due to their governments’ restriction of online price-gauging.

Granted, everything I’ve said up until now is a broken record for bookstore owners. What I can add is this observation: When I went into crowded bookshops in England, I wrongly assumed the same online pricing restrictions existed in that country, which isn’t true. Walking into one of their establishments—even chain stores like Hatchard’s of Piccadilly and Waterstones—felt as special as visiting a bookstore in New York City in the 1960s or 1970s. There is an excitement, a privilege that makes book shopping an experience akin to going to a concert or art showing. Decades ago, visiting Rizzoli or Gotham Mart was glorious. Over and over, people related similar stories to me. I personally remember that exact feeling when I was young—a bookstore could open a whole new world for me.

America needs to cultivate that atmosphere. There are a few factors necessary to make that happen. It begins with the buying public having more respect for books and writers—not an easy task. To accomplish this, bookstores can work to become more dynamic and appealing. I see bookstores needing to differentiate themselves from other stores (it remains a mystery why there never seem to be too many banks or Starbucks in a town, but I guess that’s because you can’t buy coffee online). When you walked into Scribner’s on 57th Street in 1982, there was glamour and flair. I got that feeling again many times over the past two years. Stores can achieve specialness in different ways—like the Last Bookstore in Los Angeles. Nobody who has been there doesn’t tell their friends about it; it includes a section located in an old bank vault and a tunnel made of used books. There’s a reason so many people fall in love in bookstores. Many have an intangible magic. I tried in my book to illustrate the innumerable ways that can take form.

Personal connections and relationships can’t be replicated by the online shopping experience, and a feeling of connectedness was the common thread among the more successful owners. In some cities the friendliest meeting place is the food co-op, but it can just as easily be the town bookstore. In fact, book co-ops do exist—San Francisco’s Adobe Books, for example, was taken over, collectively, by area artists after the rent doubled. There are countless examples of communities supporting and protecting their bookstores, like Giovanni’s Room in Philadelphia, where patrons raised funds and literally volunteered to construct its space. Unfortunately, such efforts are not always fruitful. Two examples that come to mind: New York City’s St. Mark’s Place and Rizzoli’s, both which fought tooth and nail for years and were saved numerous times by friends of the stores. Both had to relocate to survive; Rizzoli’s is flourishing, while St. Mark’s is no longer with us.

Stores should aim to befriend their local writers, students, intellectuals, and geeks to counter the current unlevel playing field. My main takeaway being: friends don’t let friends become a Starbucks.

Bob Eckstein is a NY Times bestseller and world’s leading snowman expert. His new book is The Complete Book of Cat Names (That Your Cat Won't Answer to, Anyway).

The goal in Victorian fiction is marriage. Well, unless the goal is to solve a murder in a Rue Morgue or safely navigate...
© LitHub
Back to top