Ellen Jovin on Spreading the Joy and Empowerment of Language

In the late afternoon of September 21, 2018, I exited my New York apartment building carrying a folding table and a big sign reading GRAMMAR TABLE. I crossed Broadway to a little park called Verdi Square, found a spot at the northern entrance to the Seventy-Second Street subway station, propped up my sign, and prepared to answer grammar questions from passersby.

This might seem bizarre to some, but to me it felt like destiny. I’ve been teaching writing and grammar for decades. I love grammar. I’ve studied twenty-five languages for fun. My bookshelves are filled with grammar and usage books, carefully alphabetized by language from Albanian to Zulu.

I majored in German in college and earned a master’s degree in comparative literature, specializing in African American and German writers. One of the greatest pleasures of my life has been participating in a world of reading and literature and beautiful, varied words. I love exploring how they are put together, not just in English, which is the focus of this book, but in all the languages I have studied.

The Grammar Table idea originally came to me a couple of months before that inaugural fall afternoon. From the moment the whim first entered my head, I knew I had to make it happen. Waiting for the furnace days of summer to end, I took care of the practical details. I researched opaque city regulations before determining that dispensing free grammar advice qualified as free speech; I studied the folding table market and ordered my favorite and most grammar-friendly, a lightweight forty-eight by twenty inches; and I made a Grammar Table sign, adding to it what I thought were helpful discussion-inspiring suggestions, such as “capitalization complaints,” “semicolonphobia,” and “comma crisis.”

Language is connected to people’s sense of self and their sense of power.

That September day, it took me approximately thirty seconds to start getting visitors. One of the first questions involved a spousal apostrophe dispute. A woman came up to me with her husband, two kids, and a complaint. Handing me her cell phone, she told me her husband had sent her a text message with a misplaced apostrophe. The evidence was right there on the screen: “Another fun afternoon for the Benson’s!” I told her she was right: no apostrophe. The husband laughed—he had no painful grammar sensitivities—and off went the apostrophe-free Bensons to enjoy their afternoon.

Some people just need someone to smile at them politely while they’re complaining, and then they go home happier. I like listening to people, and I’m genuinely curious about them, which is why I included a “Vent!” option right on my Grammar Table sign. I’ve heard a lot of complaints—about apostrophes used for plurals, missing commas, extra commas, run-on sentences, spelling snafus, peripatetic participles, and more.

Language is powerful: it enables large, organized collections of people to live together, to cooperate, to experience joy and wit, and to improve the human condition.

Sometimes my interventions soothe the insecurities of the questioner. A tiny Filipino woman—maybe five feet tall, about forty years old—approached the table holding the hand of a tinier girl. She wanted to know how to pronounce “finance.” Did the word start out like “fine” and have the stress on the first syllable, or did it begin like “fin” and have the stress on the second? When she heard that her second-syllable stress was fine, even preferable in the opinion of one of the experts whose books lay on the Grammar Table, she started jumping up and down. This is neither hyperbole nor metaphor: she literally jumped up and down and made her smaller companion’s arm sail in sync with her excitement. Someone had been telling her she was wrong, and now she knew she wasn’t, and she felt better!

That turns out to be a common experience for people who approach me: teachers or co-workers or others in their lives have made them feel bad about their use of language. But mine is not the Grammar Judgment Table, and I will listen to whatever is on people’s minds, even when they arrive with allegations rather than questions: “Millennials are ruining the language,” or “No one knows how to write anymore because it’s all text-speak.” I have heard quite a few speeches about how young people are destroying English, but young people, even children, ask some of the best questions of all, so I remain profoundly unconcerned.

I know how deep people’s relationship to grammar runs, because I’ve been teaching adults of all socioeconomic and educational backgrounds for thirty years. Language is connected to people’s sense of self and their sense of power. There is a lot of grammar insecurity; people regularly wish they knew more about the building blocks of the words they use. Whoever the Grammar Table visitors are, I want them to feel good about the relationship they have with language today and, if they want to acquire new knowledge, hopeful about where they might end up.

In the beginning, I regularly sat out by the same Seventy-Second Street subway stop on Broadway. That station disgorges thousands of people every evening during rush hour. However, I was soon on the move to other locations around town. Language lovers are numerous and ubiquitous in New York. At Grand Central one day, I ended up surrounded by eight Metropolitan Transit Authority workers in uniform—five men and three women. At first I thought they were going to tell me I had to leave, but instead the encounter became an MTA grammar confessional.

One told me, “I can’t tell the difference between ‘your’ and ‘you’re.’” Another complained, “I don’t know what to do with the semicolon.” A third MTA employee, a woman, confessed, “I can’t pronounce ‘ambulance’ right. I keep saying ambilance!” Her co-workers agreed that yes, she did do that! Then a six-foot-seven employee jumped in. “I can do just two things,” he said. “I can reach things and I can write. But you can’t make money as a writer, so I work for the MTA instead!”

My experiences have reminded me that it is still possible for strangers who disagree to talk instead of fight.

Within six months, I was answering grammar questions across state lines. That’s because after the positive response to the Grammar Table in New York, my husband and I had the same thought: Road trip! And off we went. Brandt Johnson, my partner in life as well as in a communication skills training firm—and a language lover himself who is constantly making pronoun antecedent jokes around the home—has now filmed hundreds of Grammar Table encounters in forty-seven states, footage that he is turning into a Grammar Table documentary. We were going for fifty, but the pandemic arrived in the US before we reached Hawaii, Alaska, and Connecticut.

Well, we did actually reach Connecticut, but Brandt and I were hungry and got pizza, which was delicious, so then we got more pizza, and then it got dark and cold, so we thought, “We can come back anytime,” but then COVID-19 came first and we couldn’t. As I write this, however, plans for the missing three states are in the works.

Because of the Grammar Table, I have met thousands of people I would never have known otherwise. A grandmother in Montana told us she had just been diagnosed that day with dementia, and Brandt and I each gave her a big hug and tried not to cry. A construction worker in Alabama revealed a secret fascination with fountain pens. In New York, a fashionably dressed young woman told me, “I am an obsessive lover of footnotes,” then pulled out her phone and showed me a photo of her foot with ibid tattooed on it. I had met my first footnote fetishist!

My visitors are diverse, and often really different from me in outlook and experience. We have conversations, however, that are filled with humor and feeling for the complex linguistic glue that binds us together as human beings and distinguishes us from other living creatures. Some of the experiences are so moving that I have to steady my voice when I reply.

It is important to me that people who don’t speak English natively, or at all, feel welcome. That’s why my sign says ANY LANGUAGE! I love and welcome discussions of all languages, and I treasure opportunities to exercise my skills in ones I speak or have studied. To date, Grammar Table conversations have extended well beyond English to cover topics in Spanish, German, Arabic, Polish, French, Urdu, Chinese, Italian, Russian, Hebrew, Portuguese, Japanese, Tagalog, Turkish, Sinhalese, Armenian, Bengali, Lakota, Greek, Indonesian, Latin, Hindi, Korean, Dutch, and more.

In this book, I share some of my experiences at the Grammar Table, divided by topic, framed with guidance, and illustrated with real-life examples from around the country. You may recognize some of the questions as ones you have, too. Language is powerful: it enables large, organized collections of people to live together, to cooperate, to experience joy and wit, and to improve the human condition. It is a thing to celebrate.

At a time of deep divisions within the United States, my experiences have reminded me that it is still possible for strangers who disagree to talk instead of fight—and even if they do fight, to do so without hating. After all, how mad can one really get about a comma? The quotidian is calming. We all poop, and we all punctuate. 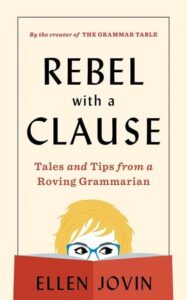 Excerpted from Rebel With a Clause: Tales and Tips from a Roving Grammarian by Ellen Jovin. Copyright © 2022. Available from Mariner Books, an imprint of HarperCollins Publishers.

Ellen Jovin is a founder of Syntaxis, a communication skills training consultancy. She holds degrees from Harvard in German and UCLA in comparative literature, and has studied twenty-five languages just for fun. She lives with her husband in New York City. 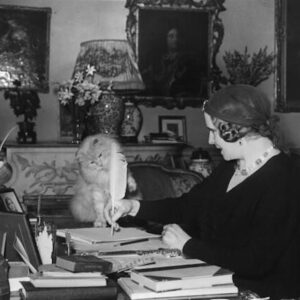