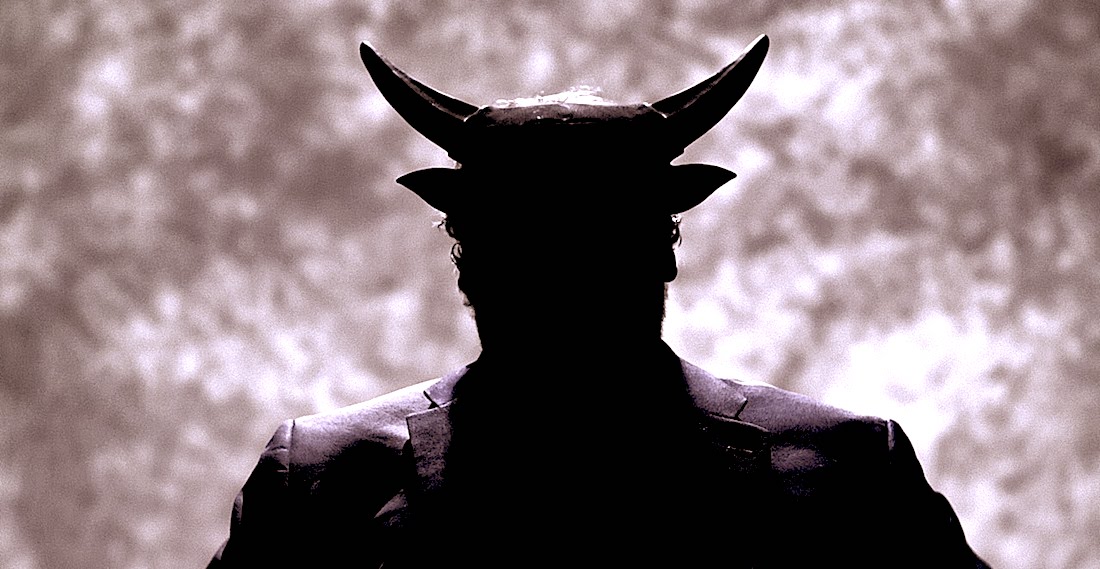 What Happens When Satanists Try to Build a Public Monument?

For Some Residents in Belle Plaine, MN,
Religious Freedom Has Its Limits

The town of Belle Plaine, Minnesota is so small that it makes the town of Greece, NY look like Athens in comparison, or at least Thessaloniki. I did make it to Belle Plaine in July 2017, but not under the circumstances I had expected. On the night before Saturday morning’s rally against the planned Satanic veterans monument, I received an email message from The Satanic Temple’s (TST) Doug Mesner informing me that the town council would be deciding at its Monday meeting whether to revoke the limited public forum it had created back in February. Predicting another heated and exciting meeting like the one that had taken place earlier in the year, I immediately booked a flight to Minneapolis for Sunday morning. By noon on Sunday I had checked into my room at the HomeTown Inn and Suites, which is close enough to Veterans Memorial Park that you can see it from the parking lot.

It’s a shame that I wasn’t able to make it to the Saturday rally because by all accounts it was quite an event. About 150 Catholics, most from out of town (and one holding a statue of the Virgin Mary on his shoulders), showed up at the park to protest, praying and holding signs saying things like “Honk against Satan,” “Keep It One Nation under God,” and “Satan Is the Eternal Loser.” Nearby, a group from the Minnesota Left Hand Path Community supported the monument while lounging on some picnic blankets, where they ate snacks and talked with both protestors and the media. According to the Left Hand folks, they made at least one convert during the protest, and it “wasn’t even because of the cookies and lemonade.”

The day I arrived, I drove out to a Starbucks in nearby Shakopee to chat with Koren Walsh and Kimber Starnes, two members of the Left Hand Path, about their experiences with TST, the monument, and the rally. Walsh and Starnes told me that there are about 20 or 25 people in their Left Hand Path Community (“Left Hand,” they explained, refers to people who look inside the self for meaning, like Atheists, Satanists, and Buddhists—people who, as Starnes put it, “are working out spiritual shit on their own”).

They had helped run a chapter of TST for a while, but the chapter left the national organization over differences in opinion about some of TST’s decisions. Because TST’s monument was going to be placed basically in their backyard, though, Walsh, Starnes, and some other likeminded people raised $1,000 for the black cube by selling cupcakes made by Walsh, with penises and vaginas on them, and “coffin cookies” designed by Starnes, an accomplished artist whose work focuses primarily on death. “As much as I don’t want religion, I really want this statue,” Walsh told me. “We made so many cupcakes.”

I asked Walsh and Starnes about the rally the day before, and they both told me it had been fairly incredible. Walsh said she barely had time to eat because she spent most of the rally talking to reporters. I had seen some of the interviews she gave online; in one of them she told a reporter that she was frightened of the protestors, primarily because she had received “threats of rape, of murder, or both.” I asked about this, and both Walsh and Starnes admitted to being shaken by the presence of so many people at the park.

Starnes was particularly traumatized. “I felt terrified,” the death artist told me, “and it takes a lot to terrify me.” Her fear and unease were clearly exacerbated by the current state of the nation. Calling Donald Trump the “Fascist Cheeto,” Starnes told me, “I don’t want to be on this planet anymore. Things sucked before, but it wasn’t this bad.” A few minutes later, however, she said that she had found a real home among the Left Hand Path Community in Minneapolis and now feels like “it’s all right to exist in the world exactly as I am.”

I spent most of Monday in my hotel room, working and waiting for the evening meeting of the town board, but a brief afternoon stroll over to Veterans Memorial Park brought an interesting surprise. I was sitting on a bench under a tree, admiring how the park’s prairie grasses and American flags move lightly in the wind together, when I noticed out of the corner of my eye a woman walking around the circumference of the park holding a large jug of water. At first I thought she might have been exercising and drinking from the jug to stay hydrated, but then I realized that every couple of yards, she would stop and sprinkle a little water from the jug onto the ground.

She was blessing the park with holy water! I had never seen such a thing, so I sat and watched as unobtrusively as possible, as the woman wandered over to the public forum part of the park, right where the Joe monument had been (Joe had been removed before the rallies, purportedly to protect it in case things got out of hand). The woman poured the remaining water from the jug directly on that spot. She then stood for about two minutes holding a cross up in both hands in front of her, presumably praying. When she was done, she looked over at me and waved. I waved back, and she left.

Although there were one or two Belle Plaine residents that supported the inclusion of the Satanic monument, the rest were opposed, often hysterically so, to the notion.

I’m sad to report that the town board meeting on Monday evening was one of the most anticlimactic two-hour periods of my life. The resolution rescinding the public forum was shoved into the middle of a long list of agenda items that were approved at the beginning of the meeting by consent, without any public debate or discussion. Just like that, with the snap of a finger, the public forum was gone. Although I sat there for the rest of the meeting, along with about 40 other people, just in case anything about the forum came up, nothing interesting happened; most of the meeting was spent in a heated debate over whether the board should grant a motion for a zoning variance to allow an apartment building to go up on the corner of Church and Alpine Streets (the motion failed).

It turned out that all the discussion and debate about the public forum had taken place either by email or in private. TST had obtained a stack of email messages about the issue that residents of Belle Plaine and nearby towns had sent to the city manager. Although there were one or two that

supported the inclusion of the Satanic monument, the rest were opposed, often hysterically so, to the notion. For example:

Even the thought of a monument to Satan is shocking. The horror of honoring Satan, the father of lies, the evil one, the enemy of mankind is truly beyond my ability to articulate. Please do not bend to some aberrant minority to appease them. . . . Setting aside the spiritual question, who would ever want to go visit Belle Plaine if it is a place that invites in evil and darkness?

Are you nuts or just plane [sic] dumb, why would anyone want to subject their community to this kind of notoriety?

Are you ready to deal with, and have on your conscience, tortured and mutilated cats? This isn’t just a Halloween thing, nor just black cats, it’s constant. Do you want your or your neighbors’ cats stolen? Do you want your animal shelter to be providing cats for torture or is the mission of your shelter to try and find GOOD homes for the cats? Do you want your families and children to find the remains over and over and over again? This nuisance alone—hoping it’s against your city law to torture and kill cats—should be grounds enough to deny the viability of a satanic memorial/altar in your city. . . . Sad.

Somewhat deflated by the meeting, I walked a block down the town’s main street to Johan’s Sports Bar and Grill for a burger and some beers. Bingo had just ended, and so after a group of older people filed out, the bar was almost empty. I asked the bartender what he thought about the whole Satanic monument controversy, and he declared that he was happy that his town had stood up to the Satanists. A young couple sat down near me, and we all talked some more about the situation while I stuffed my face with delicious tater tots. The woman also seemed happy about the result and was excited to explain that “if someone believes in Satan, they must also believe in God,” a sentiment that the bartender enthusiastically affirmed.

A second bartender, though, seemed a little more thoughtful about the whole thing; she expressed her disappointment that the Catholics who had come from out of town to protest the Satanic monument were more concerned about religion than they were about veterans. The guy from the young couple echoed the focus on veterans; he said he didn’t really have an opinion on religion but felt strongly that veterans should be honored. An older guy came in later who actually seemed to have some sympathy for TST’s position, but the only thing he said that I can remember for certain was in response to the young lady’s confession that although Catholic, she did not believe in hell. “Well, then,” he replied, “you’ve never been to Idaho.”

After a few beers, I made my way back to the Home View Inn and Suites for the night and then back to Boston the next morning. The last I heard, Joe had been put on display above the entrance to the private Belle Plaine Vets Club. The Satanic Temple moved the veterans monument to its headquarters in Salem, Massachusetts, and filed suit against Belle Plaine to try and get back the money it spent having the monument constructed. 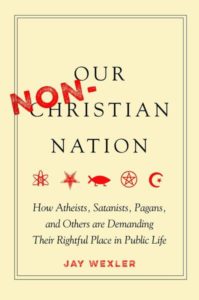 Excerpted from Our Non-Christian Nation: How Atheists, Satanists, Pagans, and Others Are Demanding Their Rightful Place in Public Life by Jay Wexler  © 2019 by the Board of Trustees of the Leland Stanford Junior University. All Rights Reserved.

A Professor at Boston University School of Law, Jay Wexler is also a humorist, short story writer, and novelist. A one-time clerk to Justice Ruth Bader Ginsburg and former lawyer at the US Department of Justice, he has written for National Geographic, The Boston Globe, McSweeney's Internet Tendency, Salon, and many other outlets. His books include When God Isn't Green, Holy Hullabaloos, and Our Non-Christian Nation.

A Brief and Awful History
of the Lobotomy 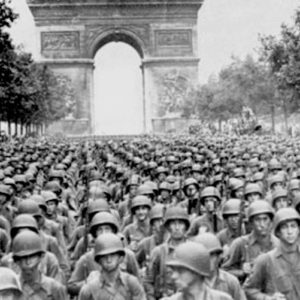 On August 23rd, the day after Dietrich von Choltitz dispatched Rolf Nordling to contact the Allies, Hitler sent a message to...
© LitHub
Back to top
Loading Comments...