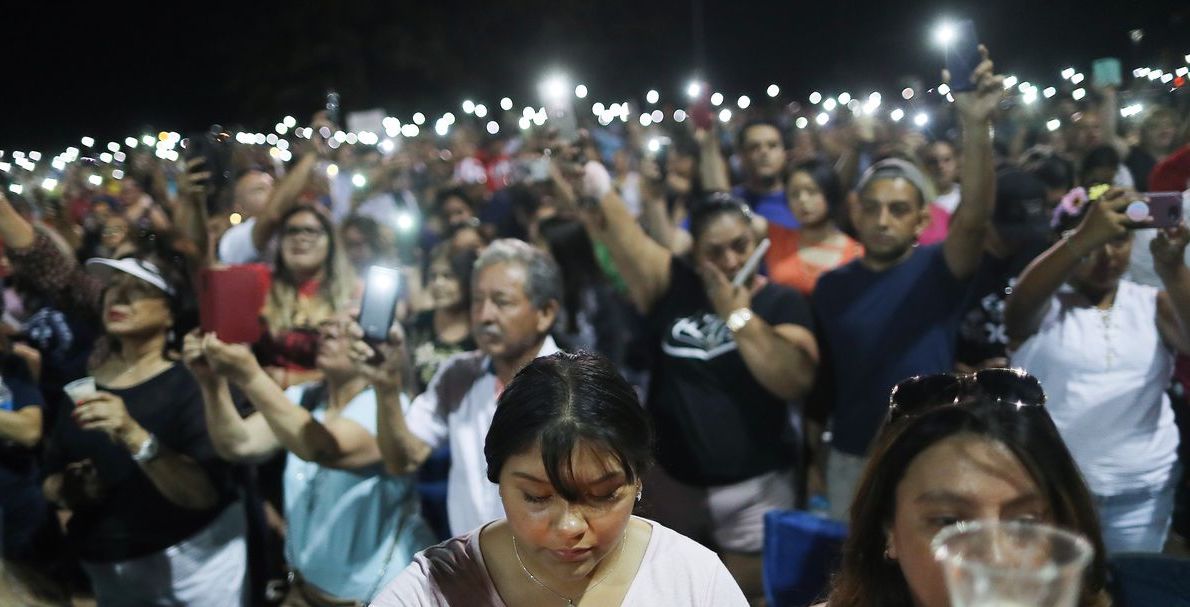 My family wanted Papa to blow out the candles, quickly, as the news grew darker. It was August 3rd, my father’s 83rd birthday, and the largest massacre targeting Mexicans and Mexican Americans in recent US history was happening in El Paso. Inside our old Walmart.

We had gobbled down our menudo, and now watched wearily as dad stoically blew the candles out while we sang a halfhearted mini rendition of Las Mananitas. I didn’t even wait for the cake to be cut. I hurriedly walked away to retrieve my cellphone to verify reports, call sources, figure out the magnitude of what turned out to be the latest massacre by a white supremacist.

The angry, unemployed, college drop-out drove nearly 700 miles from North Texas to invade our home. A domestic terrorist attack. The alleged gunman described in a four-page manifesto posted online that his motive was to “stop the Hispanic invasion of Texas.” And to save America from the demographic changes sweeping the nation, the “replacement” underway, echoing chants of “Jews will not replace us” at a white supremacist rally, complete with tiki torches, in Charlottesville, Va., in 2017.

The goal seemed obvious: Erase my father’s story and that of more than 35 million Mexican Americans, who blazed new trails, many at the foot of this now maligned Ellis Island of the Southwest, to set off and put down roots across the United States. Given that the entire southwest once belonged to Mexico, the shooter from Allen, Texas obviously doesn’t know history.

Dude, who’s invading whom? I mockingly asked myself, growing increasingly pissed off, raw emotions building within me.

I sat in my chair and in-between calls looked across at my father, alone, staring at the half-eaten cake. A heartbreaking scene. He looked frail, tired, like a scared little boy at 83. He got this far with simple ambition and a philosophy: Work your ass off and keep your head down. Don’t draw attention to yourself. Shrug it off.

My blood boiling, a series of questions ran through my mind, the same ones I had asked my entire life and explored in my latest book, Homelands: How do we fit in? How do we become American enough, form part of the mainstream, integrated into its colorful, diverse tapestry, its noble ideals and democratic principles?

Those questions are at the center of the narrative about four friends three decades and two countries, and begins in Philadelphia and of course includes Mexico, and El Paso, the epicenter of my Homelands. This land, the sweet spot of who we are, now coping with relentless, daily verbal attacks by the president and his Republican cohorts to stop the browning of America. Halt the arrival of migrants from Central America, stop them from seeking asylum, at all costs. Violate international human rights accords. Separate families. Cage children. Build more walls to protect us from them. Hit them. Bash the border, and anyone who dares cross it and looks likes them, us, again and again, like props in ghastly political theater.

And now, shoot them.

The goal seemed obvious: Erase my father’s story and that of 35 million Mexican–Americans, who blazed new trails to put down roots across the United States.

The barrage of tweets and comments from the White House portraying migrants as an “infestation,” “animals.” or “criminals” and the city, El Paso, as dangerous and the entire border as a national emergency that required military funds to build the wall had reached an unbearable new low.

It did not matter to the shooter that those he killed were in the United States legally and included both Republicans and Democrats, MAGA supporters, or merely shoppers from Mexico who waited in line hours on the international bridge to spend their hard-earned money in the United States—only to be gunned down.

My father’s sunken eyes met mine.

Finally, the volcano inside me exploded: What the fuck, America? What does it take to be American?

If anyone believed in the promise, greatness—and dare I say, understood the inherent racism and long festering hypocrisy of the United States—it’s my father.

He dedicated his best years to an ungrateful country. Lean, irreverent, he left his sweat in the vegetable fields of West Texas. The cotton plantations of Arizona. He carved rows high atop his tractor in the fields of the San Joaquin Valley, holding his cowboy hat with one hand, the steering wheel with the other.

He worked from sunrise to sunset to make sure Americans had food on their tables, enough red or white wines to sip, catering to their fickle tastes. He later bought a home, ran a business, paid property taxes and taught us to respect authority, always assuring us to keep our heads down, even with a U.S. passport in hand.

Whenever my mother, or some of my Mexico-born brothers expressed doubts about whether it was worth abandoning Mexico for the tall tales of the north, my father was quick to sing America’s praises. Remind us of this brave land—a country that pushed us to reinvent ourselves, he’d scold us at the mere utter of a doubt. Make the most of the opportunity and achieve what I never did. Educate yourself. Don’t look back. Honor our sacrifice.

Even now, he still believed in a nation racked by fear, mistrust, hate, running scared like an old tired, mean rooster.

Finally, the volcano inside me exploded: What the fuck, America? What does it take to be American?

My contacts inside Walmart confirmed bodies were sprawled everywhere. In the parking lot. At the entrance. The ATM and checkout lines. The victims seemed to have been targeted simply because of their color of skin.

Part of me wanted to return to the dining table to comfort my father because the news of victims mowed down like animals would soon rattle him, and he rarely let shit get in the way of his no-holds barred determination. This undoubtedly would.

I limited the grisly details to family members, all of us speaking in English, glued to their phones, siblings-turned reporters tracking down victims which included some of our former neighbors.

Why break his heart more, for God’s sake, on his birthday?

I walked outside and stared at the horizon. The bone-dry grey mountains. The Rio Grande in the distance. The point where my family’s two nations, languages and cultures, blur into one land on the far edge of Texas, New Mexico and Chihuahua.

The desert is an acquired taste. For me, it’s home. An isolated corner of the world where I don’t feel I have to choose one country over the other. I’m American and Mexican enough, sometimes feeling less than one, sometimes more than two, depending on the moment.

As I buried my face in my hands that hot afternoon, I realized I have never been so frustrated by my ability to truly convey the importance of these two countries to one another. I’ve spent my journalism career trying to be a bridge of understanding. Writing about my dual worlds—and the myriad of labels, from Chicanos, Hispanics, Latinos, Mexican-Americans, Mexicans, Latinx to just Americans—used to describe us.

I now felt like a broken bridge, battered by a rushing current of lies masquerading as “alternative facts,” fear mongering and race-baiting. Fighting with truth, even when I question whether that matters anymore. Or matters for the wrong reasons.

Did any of the stories I wrote for the assassin’s hometown newspaper, The Dallas Morning News, about the humanitarian crisis on the border inspire him to make that ten-hour drive to hunt down Mexicans.

I glimpsed my father heading outside and my way for his afternoon smoke. I tried pulling myself together. We avoided one another. He broke the silence.

Just another mass shooting, I responded, sparing him of the gruesome details. My mother looked at me with a worrisome face from faraway and shook her head.

I suddenly felt a sense of resentment, not just at the shooter, but at my own father for forgiving America too easily, for keeping his head down all those years. For living in a world of Si Dios Quiere (If it’s God’s will) and Ojala (hopefully) and believing that somehow our nomadic existence was our destiny. For acting, even after decades of living here, that we are still merely grateful guests of the country that first lured him with a temporary visa, followed by green cards for his entire family because America couldn’t find anyone else to do her dirty, low pay jobs.

We’re as American as the shooter from North Texas, who has been inundated by hateful words preached from a White House serving as a mirror for the nation’s long held hostilities.

Yet, most of us, have known nothing else, no other country. No other system. We’ve contributed to no other nation like we have to the United States, protecting its promise for generations since. We’re as American as the shooter from North Texas, who at just 21, has been inundated by hateful words preached from a White House serving as a mirror for the nation’s long held hostilities simmering underneath the surface—words that now carried deadly consequences.

We’re probably more American, I realized. We believe in the immigrant soul of the nation. Its ideals. I suddenly stood up and embraced my father, kissed him on the forehead and apologized that his birthday, on the bloodiest day ever for Latinos, served as a wake-up call. I looked at him with nothing but pride, for his unwavering faith in the future. For bringing us this far.

It’s on us to push that dream forward, protect his legacy. No one is going to erase your history, I thought. I picked up my notepad and said goodbye and headed for the firestorm.

Be careful, he said, as I bowed my head for his blessing. Esta cabron. 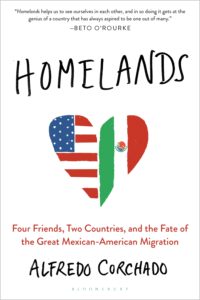 Alfredo Corchado is the México Border correspondent for The Dallas Morning News and author of Midnight in Mexico. He is a Nieman, Lannan, USMEX, Woodrow Wilson, and Rockefeller fellow and the winner of the Maria Moors Cabot and Elijah Parish Lovejoy Awards for Courage in Journalism. Corchado lives in Mexico City but calls the border home.

Meditations on a Passing Eagle, and the Beauty of Desolation 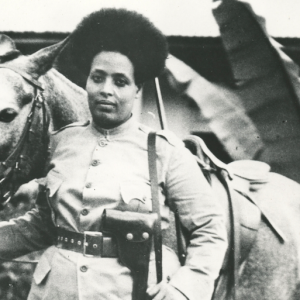 I own a picture of a young Ethiopian girl whom I have started to call Hirut. She is in her teens, and her hair is pulled...
© LitHub
Back to top
Loading Comments...