Meditations on a Passing Eagle, and the Beauty of Desolation

Kathleen Jamie: "Are there really different textures of air?"

A shape in the air above the ridge has caught my attention and, rather than drive squinting upwards through the windscreen, I pull over at the next passing place and switch off the engine.

It’s summer, a long July gloaming. The road I’m taking cuts through a rough glen. There are no houses on this stretch, only the thin road and a lochan of peat-colored water. The hill on the left is a steep strew of bare rock and heather rising to a ridge which runs north for about a mile and a half; the hill on the right is lower. The whole glen, now I’ve stopped, has become a place of entrancing desolation.

I leave the car, feel the breeze and look up. Maybe it’s just a buzzard and you know what they say—if you’re asking yourself, “Is that an eagle or a buzzard?” then it’s a buzzard. Ninety-eight per cent of all eagles are buzzards. But there’s something in the authoritative way the bird is occupying airspace, a black hyphen above the near-bare crest of the hill.

Now the bird is joined by another, at a distance, and the two of them are dark against the evening sky. The two are in relationship, you can sense it, but not obviously acknowledging each other.

I have the first in the binoculars now: yes, the long, straight underside of the wings, the deep indentations, spikes almost, of the wing tips. It shows no color except the back of the head or nape, which is markedly pale, and which now and again ignites in the evening light. But I have to look hard to see that. I lower the glasses and watch both together, a team. What marks them out is the way they treat the air: as a resource, a birthright, theirs in never-ending abundance.

Now one peels off and glides down into the glen on the far side of the ridge and is gone from view. In its absence, the first eagle flies lower down toward the valley floor here where the road runs, where I stand leaning against the car. This bird is hanging in the air on one side of the hill, its mate like a counterweight on the other.

Because it’s dropped height, it’s not now a shape exposed against the sky but a movement camouflaged against the heather and bracken of the hillside. It’s consequently difficult to follow until it turns and for a moment displays the brassy color of its back. I realize that, in all the time since I left the car, it has not once beaten its wings.

Weeks later, I ask an acquaintance who is a glider pilot, about the feel of air. Are there really different textures of air, and can you feel them?

Down here at the roadside the ground is damp, bog cotton shivers. No other vehicle has passed. Over this landscape the eagle moves as though the air were ice; as if it were a puck sliding over ice.

For a moment there I lost the eagle but now it’s visible again. It’s coming closer and looks as though it might pass almost directly overhead. I try to keep track of it in the binoculars, and sure enough it descends at a long angle, flies across the road and glides toward the lower reaches of the hill on the other side. This would be a journey of about a kilometer on the ground—a stumbling ankle-twisting walk it would be, too. Now it’s swinging round and in turning shows a mantle of color on its upper side, more brassy than golden. It’s obtained some updraft from somewhere and slides up the air again, as though riding an invisible escalator. At last, when it must feel itself about to stall, it makes four quick deep wing-beats, and carries on.

Weeks later, I ask an acquaintance who is a glider pilot, about the feel of air. Are there really different textures of air, and can you feel them? “Oh, yes, yes, yes!” she says. Even encased in a glider? “Certainly,” she says. “It’s as different as a road surface changing as you drive, and as sudden. You feel it through your body, the glider feels it, having no engines, nothing to propel you through. . . .”

Then, unprompted, she says, “I often imagine what it must be like for the big birds. Like eagles, who feel the air so much more than we do, much more sensitive. You know how they loop round and round, feeling out the thermals that will lift them? It must be like swimming in a lake, bathing now in warmth, now in coolness. . . .”

I’m still leaning against the car, and until now had the first eagle in sight, in the binoculars. It was drifting along against a slope of rock and dark heather. But now I see something I hadn’t noticed before. It’s a shed made of corrugated iron, mustard-colored, half-way up the hill. It’s enclosed in a decrepit wire fence, with a lopsided sign saying, “Danger: Keep Out.” The eagle has just passed over it, but the shed distracts me for a moment too long. What danger could there be in a ramshackle old hut? And who would go there, anyway? In that moment, in that change in the texture of my attention, a lurch like when you drive from smooth tarmac onto cobbles, I lose sight of the eagle altogether. It’s vanished, its mate has vanished, and there’s nothing to do but drive on. 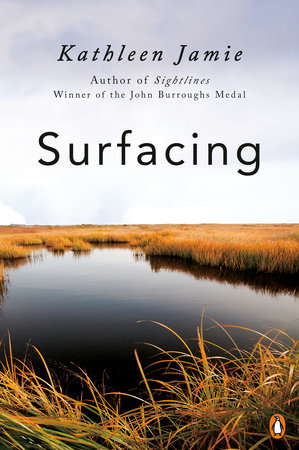 Kathleen Jamie’s Surfacing is out now from Penguin Books.

Kathleen Jamie, one of the UK’s foremost poets, is the author of four books of poetry and three nonfiction titles, including Surfacing and Sightlines. Her many awards and honors include the 2017 Royal Geographic Society Ness Award, conferred upon Jamie "for outstanding creative writing at the confluence of travel, nature and culture"; the 2013 Costa Book Award; as well as numerous prestigious poetry awards, including the Somerset Maugham Award, Forward Poetry Prize of the Year, and Geoffrey Faber Memorial Award (twice). A professor of creative writing at the University of Stirling, she lives with her family in Fife, Scotland. 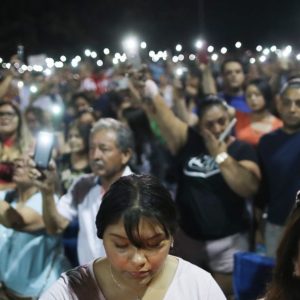 My family wanted Papa to blow out the candles, quickly, as the news grew darker. It was August 3rd, my father’s 83rd birthday,...
© LitHub
Back to top