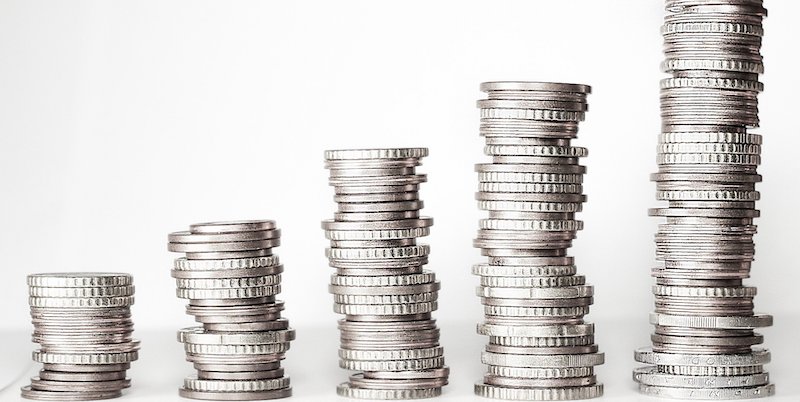 What Created the American Crisis of Subminimum Pay?

Saru Jayaraman on the System's Roots in Slavery

The subminimum wage for tipped workers in this country is a direct legacy of slavery.

The practice of tipping originated in feudal Europe, where aristocrats and nobles provided tips as an extra or bonus on top of wages to their inferiors—the monetary embodiment of noblesse oblige. Tipping came to the United States in the mid-1850s, brought by aristocratic wealthy Americans seeking to emulate their European peers, but most Americans resoundingly rejected tipping as a vestige of feudalism and an anathema to democracy. At the time, waiters, who were mostly men, received an actual wage from their employers. In the mid-1850s, male waiters staged various restaurant workers’ strikes across the country. The strikes had mixed success. Some employers raised their wages, but many others were simply fired, replacing the waiters with women.

After Emancipation in 1863, however, tipping spread rapidly as employers in the hospitality sector hired newly freed slaves as servers, porters, and hosts across the country. They refused to pay them a wage, forcing them to rely entirely on tips from customers. While many other sectors also ended up adopting the notion of tips as wage replacement, the hospitality sector led the way in mutating the original concept of tips from being an extra or bonus on top of a wage to having tips become the wage itself—as a direct legacy of slavery. In this way, just as women and Black people entered the workforce in large numbers, the wage went down from an actual wage to zero. Thus, the subminimum wage for tipped workers cannot be understood as anything other than a devaluation of Black lives and women’s work—one of the first instances of legalized gender pay inequity.

Two sectors of hospitality were impacted by this mutated notion of tips. First, the Pullman Company, a luxury train company, hired former slaves as porters and dining car waiters with an expectation of servility to white patrons who would tip them in lieu of wages. In response, Black Pullman workers formed the Brotherhood of Sleeping Car Porters, the first Black union in the United States, which won the right to a guaranteed wage. Unfortunately, restaurant workers were not so fortunate. Freed slaves who moved north were refused employment in the skilled trades they had learned as slaves, and as a result, they were forced to become cooks, porters, and waiters entirely dependent on tips. Lobbying by industry groups sealed this arrangement—these were the predecessors to the National Restaurant Association (the “Other NRA,” as advocates call it), the current behemoth trade lobby representing the interests of corporate restaurant chains.

By 1880, 43 percent of all workers employed in hotels and restaurants were African Americans. In 1900, thirty-seven years after Emancipation, a quarter of all Black workers engaged in nonagricultural labor were employed as servants and waiters. Nearly three-quarters of these workers were women. The feminization of the industry had begun some years prior; in 1850, a mostly-male workforce of waiters staged a national strike to increase their wages—which existed prior to Emancipation as a full wage before tips—and employers in Boston, New York, and Philadelphia replaced these male waiters with women in response to the strike.8 In this way, many restaurants became majority female just before the introduction of the notion of a non-wage or subminimum wage for tipped workers was introduced.

The prevalence of Black workers in service occupations coincided with some efforts to eliminate tipping in the early 1900s. Several states enacted such bans, but many of these efforts had sharply disparate racial impacts. In 1910 in Washington, DC, Congress passed a law under which any restaurant waiter who accepted tips would be fined $500.

There are now roughly six million workers who are paid the subminimum wage and depend on tips to make ends meet.

According to sources at the time, all restaurant waiters in the city were Black. By 1926 the restaurant industry lobby, with the assistance of the courts, was able to roll back all of the tipping bans that had been enacted and was able to once again have employees depend completely on tips without wages. During that same period, and with the advent of World War I, white women entered the restaurant workforce in large numbers and women quickly grew to become a majority of all servers. By 1940, nearly 70 percent of servers were women, dependent on tips for their income.

When the Fair Labor Standards Act—a key piece of New Deal legislation—passed in 1938, it gave many workers the right to a minimum wage for the first time. However, the law excluded large groups of workers of color—including domestic workers, farmworkers, and tipped workers—who at the time were servers, bussers, porters, and bartenders, but also elevator operators and shoe shiners. While farmworkers and domestic workers had other restrictions placed on their wages, tipped workers in particular were told that they could be paid no wage as long as tips brought them to the full minimum wage. From 1938 until 1991, the federal minimum wage for tipped workers rose from $0 an hour to $2.13 an hour. Thanks to lobbying from the National Restaurant Association, it was frozen at $2.13 an hour in 1996 and has not risen since then.

When people think of tipped workers, they think of workers clearing tables, taking orders, or running food out for restaurant patrons, or bartenders. It’s true that the restaurant industry continues to be the largest segment of tipped workers. (The restaurant industry is actually one of the largest employers in the United States altogether; with over thirteen million workers in the industry, prior to the pandemic nearly one in ten American workers currently works in restaurants, and one in two Americans has worked in the industry at some point in their lifetime.)

As tipped workers, they are subject to incredibly unstable livelihoods; and as mostly women, they are vulnerable to sexual harassment and even assault.

But there are tipped workers in all sectors of the service industry. Tipped workers carry our luggage, they wash or park our cars, they do our mani-pedis, they give us massages, they cut and style our hair, they deliver our food and groceries for DoorDash or Instacart, and they drive us to work and play for Uber or Lyft. Workers who enter into tipped occupations do so because these jobs provide them an opportunity to work and quickly begin earning ready cash to support their families. Tipped workers put themselves at our service, tolerating abusive employers and, at times, customers, navigating unstable tipped wages that vary by shift and season. Their dependence on tips, which fluctuate wildly, makes them vulnerable to sexual and other forms of harassment, and even assault.

There are now roughly six million workers who are paid the subminimum wage and depend on tips to make ends meet. The National Restaurant Association may have initiated the idea of a subminimum wage for tipped workers, but now the idea of tips as a replacement for wages has spread across the economy. The existence of a subminimum wage continues to create an incentive for more sectors to follow the restaurant industry in a race to the bottom, and that means the number of workers who are forced to live off the whims and fancies of customers to feed their families only grows. Increasingly, these workers are the backbone of the gig economy. Workers who are misclassified as independent contractors—so that their employers can avoid paying them wages and benefits—provide taxi services, deliver foods and goods, and take care of your household chores, all at the touch of an app, increasingly depend on tips to augment meager base pay—a subminimum wage.

The persistence of subminimum pay is a direct reflection of who tipped workers are. Today, two-thirds of tipped workers in the United States are women who work in casual restaurants, nail salons, hair salons, and many other environments where tips are meager. They struggle with three times the poverty rate of the rest of the U.S. workforce and who use food stamps at double the rate. Black tipped workers were always majority women.

Moreover, starting in the 1980s, the service sector experienced rapid demographic change, with immigrant workers transforming the industry. The Immigration Reform and Control Act of the 1960s had allowed an initial wave of Black and brown immigrants into the United States; by the 1980s they were being followed by family members, by refugees of the Cold War from Latin America and Asia, and by refugees from the World Bank’s austerity policies in the global South. Foreign-born workers made up 10 percent of the restaurant workforce in 1980; this number grew to 25 percent by 2010. Nearly one out of four workers in the restaurant industry is now foreign-born, and tipped restaurant workers who were foreign-born grew from 9 percent to 19 percent in that same period. Estimates from the Pew Hispanic Center suggest that up to half of these workers are undocumented.

Immigrant tipped workers can be found in every state of the nation, and they come from all over the world. While it is true that half of all immigrant workers come from Latin America, there are sizable populations of workers from Asia, Africa, and Europe that vary by occupation. Workers from Asia, for example, are a majority of nail salon and gaming service workers and most massage therapists. Workers from Africa are concentrated among taxi drivers, valet workers, and bellhops. Immigrants from Europe, meanwhile, are overrepresented among massage therapists, bartenders, and hosts. Workers from Latin America are heavily concentrated among car wash workers, bussers, and runners, while also being a majority of immigrant bartenders, counter attendants, servers, delivery workers, hosts, barbers, and valets.

What’s more, tipped workers include not only millions who are undocumented but also millions more who are documented—studying or working on a visa, living as a permanent resident on a green card, or even naturalized citizens. In today’s America some face a triple vulnerability—as immigrants and people of color, they live in constant insecurity as to their future in the country. 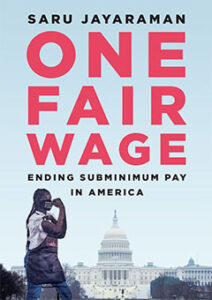 Copyright © 2021 by Saru Jayaraman. This excerpt originally appeared in One Fair Wage: Ending Subminimum Pay in America, published by The New Press. Reprinted here with permission.

Saru Jayaraman is the co-founder of the Restaurant Opportunities Centers United, director of the Food Labor Research Center at the University of California, Berkeley, and the author of Behind the Kitchen Door, Forked: A New Standard for American Dining, and One Fair Wage: Ending Subminimum Pay in America (The New Press). 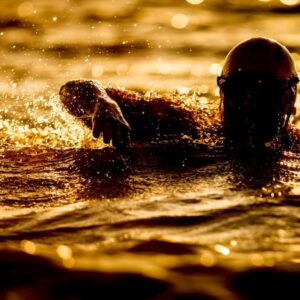 For me, part of being human means taking to the water. I'm resilient enough to swim from spring until autumn without a wetsuit....
© LitHub
Back to top
Loading Comments...