Lee Cole on the Homogenization of Rural Life in America

Looking at all this, you might feel a sense of déjà vu. Have I been here before? you might ask. You check your phone to see where you are, but the name of the town hardly matters. If you were to drive another 20 minutes and pull off at the next exit, it would look about the same. You could be anywhere, and therefore might as well be nowhere. For a writer, especially one interested in place, this uniformity presents a real problem.

Eudora Welty spoke of place as a kind of awareness that precedes all good writing. “Place in fiction is the named, identified, concrete, exact and exacting, and therefore credible, gathering spot of all that has been felt, is about to be experienced, in the novel’s progress,” she wrote. “Every story would be another story, and unrecognizable as art, if it took up its characters and plot and happened somewhere else.”

For a long time, I believed this. I’ve taught Welty to my students, along with Dorothy Allison’s wonderful essay called “Place,” in which she argues that even in “nowhere places”—truck stops, motels, diners—we can still find a way to express the uniqueness of a setting, because that uniqueness is always tethered to feeling, to the irreducibly complex emotions of a real, specific character, inhabiting those places. The optimist in me still hopes that this is true, that Welty and Allison are right.

But I’ve been worried lately that the uniformity of Nowhere Places has a more pernicious effect than I’d realized, that uniform places give rise to uniform feelings, constraining what’s possible for a piece of literature set there.

I should be clear we’re talking about rural America here. Welty’s assertion holds true, I think, for most cities. If a story set in Boston took up its characters and moved to Los Angeles, it would fail to make much sense. But it’s harder to say that a story set in western Kentucky, where I’m from, could not pick up its characters and move to, say, rural Oklahoma. Obviously, there would be differences—different accents, different natural landscapes. But the worldview would be largely the same, and so would the material conditions.

This homogeneity is relatively recent. In literature, consumerism’s slow colonization of rural life was first captured by the so called “Kmart Realism” of the 1980s. Bobbie Ann Mason, of Graves County, Kentucky, was one of its main practitioners. My grandmother worked at Kmart after decades of farm life, raising tobacco and four daughters. In many ways, she could’ve been a character in one of Mason’s stories. The convenience and abundance of something like Kmart must’ve seemed like a fantasy—like some farfetched dream—to a woman whose parents were sharecroppers, and whose childhood was overshadowed by the Great Depression.

The obverse of uniformity is not uniqueness, but estrangement. It arises when the images and slogans of consumerism are articulated so many times that they lose their superficial meaning and become twisted distortions.

What made “Kmart Realism” interesting was the juxtaposition of banal consumerism with fading agrarian culture. On the level of dialogue, it was the contrast between “standard” English, ushered in by television and radio, and the archaic, vernacular English of the older generations. The power of that literature lies in comparison—in being able to see the old and the new side by side.

The problem now, as I see it, is that the agrarian world of rural America—its customs and folkways and idioms—has all but vanished, eclipsed by the metastasizing influence of consumerism. This raises the question: what comes after “Kmart Realism,” when the brand names and newfangled gadgets and fast food concoctions are no longer novelties, but simply the norm? What strategies can a writer employ to capture the uniqueness of her characters in this world?

One possibility is to pay attention to strangeness. This seems obvious, and in some ways it’s not new. Southern writers (O’Connor, Welty, McCullers) have always sought out the grotesque and bizarre. But the strangeness I’m imagining is of a different character than the grotesquerie of the Southern Gothic. It’s related to the Uncanny, wherein the weird is always embedded in the familiar, but it’s not precisely that either. It’s perhaps closest to the experience of “semantic satiation,” in which a word is repeated so many times that it loses its meaning and begins to sound like gibberish. The same effect is produced, I think, by the repetition of Walmarts and strip malls and fast food restaurants. The obverse of uniformity is not uniqueness, but estrangement. It arises when the images and slogans of consumerism are articulated so many times that they lose their superficial meaning and become twisted distortions.

Let me give you an example. Let’s say that by the time you were in high school, the Kmart where your grandmother was employed had gone out of business. The vast parking lot, where the sodium lamps no longer worked at night, became a place for people to buy drugs. The guy you bought pills from was a white dude in a flat bill cap who drove a Nissan Sentra. The engine sounded like someone having an asthma attack. The interior smelled like skunky weed and grape Swishers, and there was a giant Monster energy drink can, with the radioactive green claw marks, always in his cupholder. You would sit there in the passenger seat while he explained to you the features of his vape pen, and before he gave you what you wanted, you’d have to listen to him freestyle rap over a beat of his own creation. The lyrics of his verse would be full of ridiculous bravado, how one day he would get out of Kentucky and become a millionaire, but you would hear, years later, that he’d been killed—decapitated, the rumor went—in a car accident while driving high or drunk, probably both.

This character—the vaping, Monster-drinking, white rapper who sells you Percocet in an abandoned Kmart parking lot—could not have existed in a Mason or Carver story of the 1980s, much less an O’Connor story. But any fiction now that cares about rural life has an obligation to notice him. He’s a funhouse reflection of the culture that made him.

This is an extreme example, and I don’t want to suggest that rural writers need only to seek out others like it. The drug dealer’s perspective is probably not the most interesting anyway. He, like the other denizens of Nowhere, USA, might not be able to see how absurd his life has become because absurdity has become the norm. But the writer can see it. The writer can go home to his grandmother’s basement where he’s been living off-and-on for two years—the same grandmother who worked at the Kmart. He can hear Fox News blaring on the TV upstairs, punctuated by commercials for reverse mortgages and Life Alert necklaces. He sits there, vaguely stoned, eating a McDonald’s cheeseburger from a clamshell box, the lid of which says, I’m lovin’ it. He thinks about the drug dealer’s ridiculous freestyle, and a terrible fear grips him—that perhaps his own dreams of escape are just as ridiculous, that all he has to look forward to is more of the same.

It’s in a moment like this that we’re obliged to meet our characters. Confronted with uniformity, a writer must look to its obverse—to the estranged, the weird, the excessive—to see not just a reflection of his culture, but a reflection of himself. 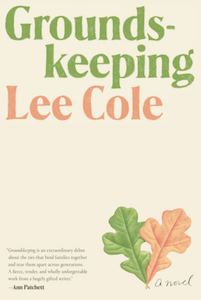 Lee Cole’s novel Groundskeeping is to be published in March through Knopf.

LEE COLE was born and grew up in rural Kentucky. A recent graduate of the Iowa Writers’ Workshop, he now lives in New York. His newest book is Groundskeeping. Photo by Ariel Katz.

Stop, Collaborate, and Listen: Amanda Pellegrino on Writing for TV Versus Writing a Novel 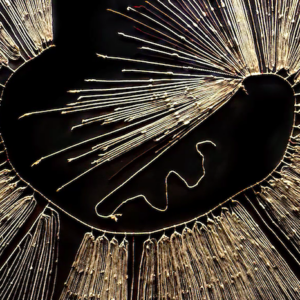 The Inca are most often remembered not for what they had but for what they didn’t have: the wheel, iron, a written language....
© LitHub
Back to top
Loading Comments...