Western Democracy is on
Shaky Ground

Simon Reid-Henry on the Thin Line Between Success and Implosion

What is the story of democracy in our time? Not long ago the Western formula of democracy and free markets seemed unassailable. When the Cold War ended in 1989, the new “great game” played by diplomats, politicians and intellectuals alike became to promote and report on the further spread of democracy about the globe. The tendency was to assume that democracy was working well still at home.

The war on terror and the financial crisis have more recently framed those assumptions in a less comfortable light. By the time of the uprisings that swept across the Arab world in 2011, the dimming status of the liberal democratic formula was clear. Whatever was being demanded on the streets of Cairo it was not Western-style liberal democracy. Nor was a liberal democratic form of government any longer something that could be “built” on behalf of these nations, as the United States had attempted during the previous decade in Iraq.

In the aftermath of 2011, as Syria imploded and Islamic State dug in its bloodied claws, the former call to democratic arms of the pundits in Washington was replaced by a faint piccolo whistling about “democracy in retreat.” From the point of view of the West it was not long before the high drama of the Arab Spring was drowned out by a pervasive and growing cacophony of discontent at home.

The former narrative of democracy’s historical spread has now been firmly replaced by one of its crisis and decline. “Never has there been such a thin line between a positive outlook for democracy and the chance that it might go off the rails,” wrote the French historian Pierre Rosanvallon in 2008. “What’s gone wrong with democracy?” asked London’s The Economist a few years later in 2014. Neither were looking across the Mediterranean to Tunisia or Algeria, but home to the disaffected banlieues of Paris, to the US Congress and the European Union.

The concerns of over 4 million British voters, who in 2016 signed a petition demanding repeal of the country’s recent referendum on “Brexit,” or of those dumbfounded by the election of Donald J. Trump to the White House later that same year, revealed that sense of anxiety to be spreading. “Democracy has survived the 20th century by the skin of its teeth,” observed Arthur Schlesinger Jr. presciently at the end of the millennium. “It will not enjoy a free ride through the century to come.”

The streets of Western capitals have been marched upon by people in larger numbers than at any time since the high point of the civil rights movement half a century ago.

In recent years Western democracy has indeed come under threat; the basic right of citizens to habeas corpus has been pared back after centuries of struggle to flesh it out. Distrust in politics has grown. Foreign governments have been shown to have interfered in national elections. Civil liberties, including the right to privacy in the home, have been openly infringed. The growing power of political lobbies has given moneyed interests undue influence over policymaking, and has endowed a new class of politician with the ability not only to fundamentally misunderstand their constituents but to be rewarded for this. Socioeconomic inequality, which for much of the postwar era had been warded off by the welfare state, has returned.

In response to such developments, the streets of Western capitals have been marched upon by people in larger numbers than at any time since the high point of the civil rights movement half a century ago. Whether it is Occupy protesters or the gilets jaunes, white supremacists or national populists, a more assertive popular voice is emerging beneath the battered wing of liberal democracy and its representative institutions.

Some of these movements are utopian; others demand greater rights, if only for themselves. But everywhere the clamor of popular disapproval is growing and is making its presence felt in the cordoned halls of liberal democratic debate. Democracy itself is changing before our eyes. But what is it that has changed exactly?

Stripped of its national particulars, modern democracy, as the influential Austrian jurist Hans Kelsen once argued, is “the restriction of freedom by a law under which all subjects are equal.” That is, on the face of it, a wonderfully simple formula. And yet the way different societies have over time sought to reconcile these two values—of freedom and equality—has fallen short more often than it has succeeded. Franchises were neither full nor fair for most of the 19th century. And many of the parliaments and constitutions thrown up in the wake of imperialism’s retreat did not survive long before they too needed rebuilding in the aftermath of two catastrophic world wars.

To recognize that democracy may be different things at different times is to recognize that it is both more recent and more fragile than we tend to imagine. Our own liberal democracy has almost nothing in common with the classical democracy of Athens. Scratch beneath the surface, and it soon reveals itself to have little in common either with that form of democracy inaugurated by the French and American revolutions, which placed “representative” institutions at the heart of the nation state and its newly constituted “peoples.”

But if democracy changes over time it also changes from place to place. Writing in the middle of the 19th century, Alexis de Tocqueville famously compared democracy in France with what he had recently seen of it in America. He believed that America had come some considerable way further than France in achieving the right balance between governments that ruled from above and people as they voiced their demands from below. What was distinct about democracy in America, Tocqueville suggested, was the achievement of “the general equality of conditions.” Looking to America as the crucible of democracy’s future, Tocqueville saw that the “empire of democracy” was irresistible—even in aristocratic societies such as his own.

And yet republican America was no more the end of history in the mid-19th century than Western democracy was after the Cold War. Liberal democracy as we understand it today in fact only properly took root across the Western world in the early years of the new century. It grew from the same bloodied soil of war, revolution, and economic crisis as its principal competitor ideologies of fascism on the right and communism on the left. The term itself had relatively little traction in America until President Woodrow Wilson roused the nation to war in its name: to “make the world safe for democracy” (he meant safe for America) in 1917.

And it took the experience of yet more illiberal regimes and failed democracies—by 1941, there were just eleven democracies left amidst the carnage of the Second World War—before the commitment to combining liberal values and the institutions of democratic equality was reaffirmed amid the “general political fatigue” of the postwar moment.

A more consistent set of liberal democratic political institutions locked into place across the Western countries after 1945, binding them more closely together as it did so. These same countries exceeded even their prewar trajectory of industrialization and they now bureaucratized as well. The resulting era of prosperity—“the Golden Age,” les trente glorieuses, the wirtschaftswunder, the miracolo economico: most countries had a term for it—was always more golden for some than it was for others. It also unfolded in the shadow of the struggle between capitalism and the communist world: indeed, it was significantly shaped by that struggle. But it nonetheless provided an unprecedented degree of political stability and economic progress that left its mark in “the institutions and the manners,” as Tocqueville put it, of the Western nations.

A thinly scraped notion of liberty has gained the upper hand over equality.

The gap between rich and poor narrowed and for many there was a sense that the Western world’s political compass was pointing in the right direction. People felt they knew where they stood and that they had a good chance of getting to where they wanted to be.

This is not at all what many now think of when they think about democracy today. For all its achievements, the modern democratic state has been hollowed out. The markets upon which the delivery of political outcomes has come to rely are volatile and encourage short-term thinking. Today’s citizens are garlanded with an expanded panoply of political rights, yet they routinely lack the social protections once taken for granted by their elders. The people grow resentful of the political elite’s detachment, while the public domain through which democratic voice is exercised has been parceled out to the highest bidder. A thinly scraped notion of liberty has gained the upper hand over equality. Something has changed, in short, and in the turmoil of the present it may well be changing again.

It is imperative we now try to understand the full chain of events by which our modern democracy has changed. It is of course a difficult thing to capture something like democracy in the process of transforming itself, and that much harder when we cannot meter history by the rhythm of the drums of war alone. The changes I’m addressing are not best measured by the number of bodies on the ground. They provide us, rather, with a different kind of drama: one forged through institutional reconfigurations, political epiphanies, and societal changes of heart. One is dealing primarily with the cold, deep seepage of ideas as they form about, and take a hold of, the present. Such changes, too, have the potential to split history apart: and, as it happens, they do leave their share of victims on the ground.

The earlier part of the 20th century was defined by liberal democracy’s struggle against its rival ideologies of fascism on the right and communism on the left: to the point of hot and cold wars alike. Tocqueville’s “empire” of democracy, by which he meant its indisputable influence as an ideal, largely won those battles in the way that Western society was reassembled after the Second World War. The defining issue of our own era has therefore been something else entirely: more a fullthroated struggle over democracy itself, a struggle to reconcile democratic equality with liberal freedom in an age of capitalist globalization. 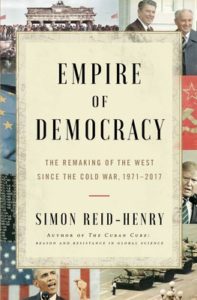 Simon Reid-Henry is a writer and prize-winning scholar. He is Associate Professor at Queen Mary, University of London and a Senior Researcher at the Peace Research Institute, Oslo. 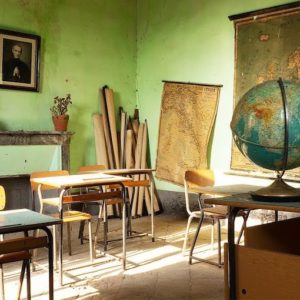 “Get poetry into the high schools!” Shortly before he died in 1963, Robert Frost told Marie Bullock, founder and president...
© LitHub
Back to top
Loading Comments...