James Holland: But with the glider troops, it’s even worse. Because the glider pilots, first of all, they haven’t flown for three months in a glider by the time they actually assemble and get into a glider for the first time again in North Africa. And by the time it comes to Operation Husky, they have flown four hours worth of training by day, and one-and-a-half by night.

Al Murray: And it’s the Waco, the American glider, not the glider they’ve trained on. But not under the circumstances are they going to land in Sicily because the RAF will only let them do flare-path night landings because it’s too dangerous to land by night without flare paths. So they’re doing a thing that even if they’ve trained for it, they can’t do it. It’s amazing.

James Holland: And a lot of the Wacos arrive from America and they’re all in crates, and it takes them ages to get them assembled. And then they assemble them and then it gets a bit windy and some of them get knocked about, so they then have to repair the ones that they haven’t even flown yet, after they’ve been first assembled and reassembled again. And Chatterton, quite rightly, is saying this is ridiculous, we really shouldn’t be using them. And his commander says, I’m going to send you home if you don’t do this. And so he sort of thinks, well, what should I do?

Al Murray: Well, he doesn’t want to let his chaps down, does he? He doesn’t want to leave them in the hands of someone who just says yes to everything. I mean, the thing is, it does underline that in general, airborne operations are calamitous. Generally. You can argue that Operation Ladbroke is a success because Aponte Granda is captured and held, and the Italians are kept off it to the point where they can be relieved, kind of. You can argue that. And you can argue that the chaos of people turning up all over Sicily in gliders confuses the enemy. But that’s not what you’re trying to achieve. It’s clutching at straws a little. 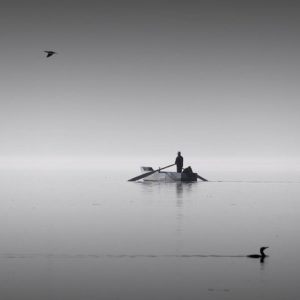 In most of human history, people have lived in small communities among those with whom they had lifelong associations and intimacies....
© LitHub
Back to top