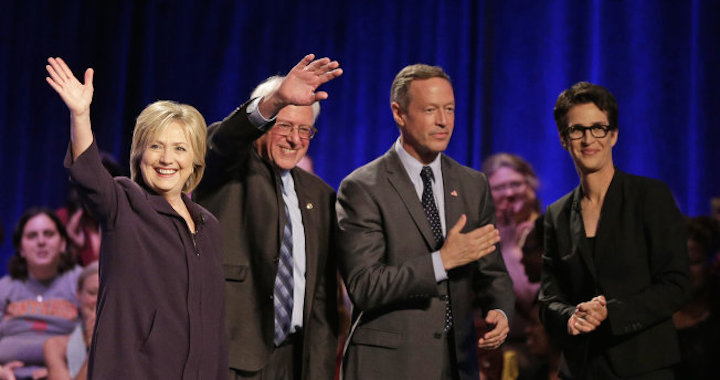 During a week when Republican presidential candidate Ben Carson insisted that just because West Point never offered him a scholarship didn’t mean he hadn’t turned one down, reasserted his conviction that the Jews built the Pyramids to serve as grain elevators, and castigated the press for questioning his claim that he had once been a juvenile delinquent, it’s only natural that the deliberately deceptive language used by the candidates interviewed by Rachel Maddow in November 6th’s “First in the South Democratic Candidates Forum” failed to attract much media attention. But Literary Hub has entrusted Henry Beard and me with identifying and translating such language—we call it Spinglish—whenever it’s used during the Presidential Debate season, and we found several fine examples during Friday night’s festivities at Winthrop College in Rock Hill, South Carolina:

“I believe in the party of Franklin Roosevelt.” This sentence, as uttered by former Maryland governor Martin O’Malley, means simply, “I’m not a lifelong socialist who decided only recently that it would be expedient to run for president as a Democrat rather than as an Independent.

“Having said that…” This Spinglish phrase comes in handy when you’re about to utter a remark that flies in the face of a statement you’ve just finished making. For example, after noting that the media “drives him nuts” by insisting that he confront Hillary Clinton, and pointing out how different Democrats are from “our Republican friends who think politics is about attacking each other in incredibly stupid and destructive ways,” Bernie Sanders employed it to preface a series of comments highly critical of Clinton’s “establishment politics and establishment economics,” and of the length of time “some unnamed candidates” took before they decided to oppose the Keystone pipeline.

“We’re on course.” Martin O’Malley offered this optimistic assessment of his presidential campaign, adding that he drew confidence from the fact that, with only 88 days left in a Baltimore mayoral primary race he eventually won, he was the favorite of only 7 percent of Democratic voters. Judged even by that modest standard, however, O’Malley’s campaign is far from “on course.” According to the most recent Real Clear Politics polling average, he is currently the first choice of only 1.8 percent of the Democratic electorate—less than a quarter of the support he commanded at the low-point of his Baltimore campaign.

virtually. During the second Republican debate, Donald Trump announced that “Everything I’ve done virtually has been a tremendous success.” As we pointed out in our coverage of that event last September, Trump’s inclusion of the word “virtually” rendered his boast meaningless, “just as an advertiser’s claim that a detergent will render your crockery ‘virtually spotless’ does not constitute a promise that your plates will be stain-free when you remove them from the dishwasher.” Bernie Sanders went Trump one better in the Democratic Candidates Forum, noting that his own use of the word when he insisted, during a Boston Globe interview earlier in the week, that he disagreed with Hillary Clinton “on virtually everything,” meant that, well, he might agree with her on a few things after all. “Virtually is the key word there,” he explained to Rachel Maddow.

In my view, arguably, and potentially. “Virtually,” as used by Bernie Sanders and Donald Trump (see previous item), is an example of what author Stewart Chaplin called “weasel words” because they “suck the meaning out of the words next to them, just as a weasel sucks the egg and leaves the shell.” But neither Sanders or Trump managed to work three weasel words or phrases into one sentence, as Hillary Clinton did while trying to make it appear that she doesn’t really support capital punishment when, actually, she does. “There are some really heinous crimes that are, in my view, still arguably ones that should potentially have the death penalty,” she cooed, which can be translated as, “It could be debated (although I’m not doing so) that there are at least some crimes that, at least as I see it (although I could be mistaken), are so egregious that society might (or might not) consider putting folks to death for committing them.” It’s no wonder she told Rachel Maddow she’d “breathe a sigh of relief” if the Supreme Court struck down capital punishment; it would save her from ever again having to resort to verbal gymnastics such as this.

[AUTHOR’S NOTE: We have collected and explained these terms as a public service (or, as some have insisted on calling it, a public self-service). Reports that we are offering this compilation purely for the purpose of promoting our recent book, Spinglish: The Definitive Dictionary of Deceptive Language (available on line, or at your favorite bookstore) are anecdotal and remain unconfirmed.]

What’s the Best Jane Austen Movie Adaptation of the 90s?

No seventeen-year-old lad should die that way. It was an idiotic accident. I’d stopped trying to pick an argument with...
© LitHub
Back to top