We Embraced the Future and
It Nearly Killed Us

We’re in the 45th year of future shock. The book Future Shock, by Alvin Toffler (with contributions from his wife, Heidi), has been in print since its publication in 1970, selling six million-plus copies all over the world. To this day, the book has endured as a touchstone and a psychological concept. And yet, the Tofflers were hardly the first to tap into a widespread sense of a society in destabilizing flux. Elul, Benjamin, Baudrillard and Debord, to name a few, had already presented similar critiques of technology and society. Still, Future Shock became the first, and arguably only, book on the subject of technological progress and psychological stress to enter the popular consciousness.

So what was the Toffler secret? Admittedly, Future Shock was very good at taking abstract ideas and restating them in plain old American English. “Future shock,” goes the Toffler tome, “is the shattering stress and disorientation that we induce in individuals by subjecting them to too much change in too short a time.” The italics are mine and probably unnecessary. The problem remains relevant today: too much techno-change too fast = a lot of very anxious people.

On this subject, the Tofflers had a lot of interesting things to say. In some cases, they were eerily prescient. They spoke, for instance, of technological change benefiting mainly a highly educated elite class, those who will be able to “understand the fast-emerging super-industrial social structures” while for “the majority of men . . . the options remain excruciatingly few.” They wrote about “the disease of change” as a “real sickness from which increasingly large numbers already suffer.” The Tofflers framed the question of technological change and its speed in a way that has been largely ignored before and after: as a psychological challenge.

And so it would seem that articulating the stress of constant change due to propulsive technological upgrade—and, at the same time, spreading such phrases and near mythologies as “information overload”—was the recipe that earned the book totemic status. But in re-reading Future Shock now, I’ve come to see it differently. The genius of the book is not turning the post-WWII European critique of technology into accessible pop psychology. No, Future Shock laid the groundwork for something far more sweeping. The book takes the horrible anxiety underlying the modern techno-obsessed capitalist state and makes it alright. Future Shock says: “It’s ok to feel this way, most of us do, but you know what? Just go with the flow. Embrace the change. Follow the plan and this, too, shall pass.”

Most people who have heard the term “future shock” assume the Toffler argument is fundamentally anti-technology. In fact, the book is anything but. Instead, the Toffler oeuvre is full of pithy pro-tech aphorisms, Yoda-like epigrams to our feebler, pre-postmodern, selves: “Change is not merely necessary to life—it is life.” “Technology feeds on itself. Technology makes more technology possible.” “The illiterate of the future will not be the person who cannot read. It will be the person who does not know how to learn.” First, the Tofflers fetishize technology—after all, what else offers “the supreme exhilaration of riding change, cresting it, changing and growing with it”? Then they warn of its awesome danger—“future shock!” “info overload!”—then they insist that the answer, the cure to future shock, is to dive in head first. Don’t fight it; embrace it.

For, as the Tofflers make clear in Future Shock, there is a plan. The solution to the problem of widespread psychological (and social) destabilization due to an ideology of constant technological change is more change. What we need is to find a way to fully embrace the liberating awesome of technology freed of anxiety and fear. Or, as they put it, if you “make the necessary effort to understand the fast-emerging super-industrial social structures” and “find the ‘right’ life pace, the ‘right’ sequence of subcults to join and lifestyle models to emulate,” then “the triumph” will be “exquisite.”

According to the Tofflers, we have future shock because we aren’t properly preparing human beings to embrace the onrushing future. What we need, then, is better preparation so more people can go further faster. “To survive,” write the Tofflers, “to avert what we have termed future shock, the individual must become infinitely more adaptable and capable than ever before.” Forty-five years before we rebranded disruption as the solution to all our problems, the Tofflers argued that the key to overcoming future shock was teaching people how to better navigate the turbulent, but inevitable and necessary, waters of constant upgrade. They did acknowledge that for many this might be a difficult transition, but they had pithy solutions for that too.

century future planners and consultants who, in recent years, have fanned out across the corporate landscape, promising to account for and protect their clients from any number of future scenarios. As the Tofflers wrote: While “most people, deep down, believe that the future is a blank . . . we can assign probabilities to some of the changes that lie in store for us, especially certain large structural changes, and there are ways to use this knowledge in designing personal stability zones.”

Embrace the change. Be the change. Predict the change. Prepare for the change. But don’t question or fight the change. Through it all the Tofflers maintained that, as they write, “none of this should suggest that change can or should be stopped.” Society should be about helping people to understand and embrace the new reality in which everything permanent, everything that went before, is obsolete. “We must,” they write, “search out totally new ways to anchor ourselves, for all the old roots—religion, nation, community, family, or profession—are now shaking under the hurricane impact of the accelerative thrust.” We don’t question the “accelerative thrust.” We open the door to it and let it sweep away the clutter of everything that once was. The old limited us. The new liberates us.

This is the genius of the Future Shock project. The book provides a blueprint for accommodating one’s existence to the needs of a consumer society constantly churning out the new and improved. Escape from future shock won’t come from lamenting the rise of a techno-industrial age and trying to push back against it by what the Tofflers dismiss as a “return to passivity, mysticism and irrationality.” The answer isn’t to question the path we’re on. The answer is to fully embrace the potential of the one and only path—future change all the time. We must merge with the future and go wherever that takes us. Full immersion is the solution: “Rather than lashing out, Luddite-fashion, against the machine, those who genuinely wish to break the prison-hold of the past and present would do well to hasten the controlled-selective-arrival of tomorrow’s technologies.” Hasten the escape from the “prison-hold” of the present; only the time-to-come offers true potential. Don’t slow down. Speed up. “We need, first of all,” the Tofflers advise us, “a radically new orientation toward the future.”

Fast forward to the present, and we see that the Toffler solution has been fully implemented. Just about every higher education institution now offers courses in “winning” the future—a magical mixture of creativity, innovation and commotion that will prepare our young for the age of tomorrow. “The degree is in disruption,” promises a new program of study at the University of Southern California, just one of hundreds of examples. Newspaper columnists demand more investment in innovation, CEOs write books about how they are transforming their staid companies into creativity factories and politicians of all stripes fall over themselves in their hurry to pay tribute to the gods of tech; in Bezos, Zuckerberg, Jobs and Musk we trust.

It is now a given that the past holds us back, that institutions are slow and in the way; that, in fact, the best institutions are the ones laying the groundwork for their own obsolescence, replaced by a fully empowered populace of individuals and corporate proxies who make change faster and better than any organization, community, or government ever could. We assert unequivocally that only change in the form of technological innovation can keep us happy, healthy and, most important, wealthy. Economist Enrico Moretti puts it this way: “Innovation is the engine that has enabled Western economies to grow at unprecedented speed ever since the onset of the industrial revolution. In essence, our material well-being hinges on the continuous creation of new ideas, new technologies, and new products.” The Toffler book, which at the time seemed like an antiestablishment screed—the Silent Spring of technological change—was actually the rulebook for a new era in which all the resources of society are assigned the task of chasing, owning and winning the future.

So why isn’t the patient getting better? Even as the Tofflers continue to write, lecture and promulgate all over the world, we, virulent adoptees of the cure for future shock, have gotten steadily worse. In an age of unprecedented plenty with impressive gains in lifespan, health, safety and, of course, the connective infrastructure of highspeed wifi and 5G cellular, we continue to deteriorate. We are plagued by mental health problems, with fully one in five Americans suffering some kind of diagnosed depressive and/or anxiety condition. Suicide rates in 2013 (the last year numbers are available) were at their highest in two decades. Full time employment is being systematically replaced by part-time low paid labor. Income inequality has skyrocketed. We’re delaying having kids or not having them at all. More and more of us live alone. Accompanied mostly by our virtual profiles, we self-medicate with booze, caffeine, pills and cat videos even as we anxiously sign online petitions to save the dolphins. Uncertainty permeates and the social fabric frays. Nevertheless, the Toffler creed continues to pervade. Politicians, doctors, professors, career counsellors and reporters keep prescribing further doses of future shock. We keep lining up for them. Surely we’re almost there. Surely the next therapeutic surge will be enough to propel us to the coming tomorrow.

Hal Niedzviecki’s new book is Trees On Mars: Our Obsession with the Future (Seven Stories Press).

Hal Niedzviecki is a writer, speaker, culture commentator and editor whose work challenges preconceptions and confronts readers with the offenses of everyday life. He is the author of eleven books of fiction and nonfiction, including The Archaeologists, which was shortlisted for the Mary Scorer Award for Best Book by a Manitoba Publisher. Niedzviecki is also the founder and publisher of Broken Pencil: The magazine of zine culture and the independent arts. His latest novel is The Lost Expert. He lives in Toronto, ON with his wife, two daughters, and the family animal. 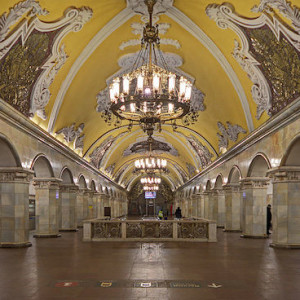 It can be difficult to take good pictures of great architecture. Perhaps it’s impossible. Not because the pictures won’t...
© LitHub
Back to top