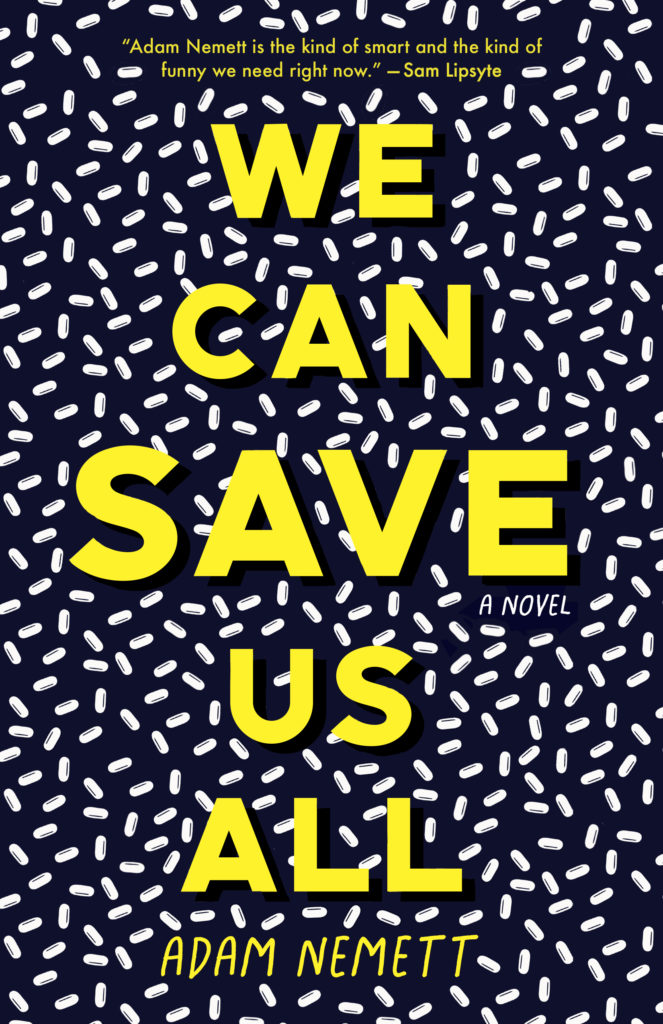 The following is from Adam Nemett's debut novel, We Can Save Us All. In The Egg, an off-campus geodesic dome where a crew of alienated Princeton students train for the end of days, exploring the ultimate question for our time: who is responsible for fixing all of this? Nemett serves as creative director and author for The History Factory, is the writer/director of the feature film, The Instrument (2005).

Though the snow picked up as Fu pulled into Pennington, the town still felt sunny and sweet. Fu’s driving stayed solid, but the ice made him slow his speed, giving David ample time to scan the neighborhood. Lots of yuletide cheer and a distinct lack of corporate presence. All the storefronts on Main Street were mom-and-pops: nifty thrift, three dog hardware, red, white & blooms. David felt giddy. He’d never lived in a town with an actual Main Street, this gently sloping road lined with sycamores and two-story houses and American flags shooting up from porches.

And just off Main Street, on a cul-de-sac called Woosamonsa Court, was The Egg.

Immediately, it was clear why they called it that. Instead of the typical colonial home—triangle on top of square—The Egg’s facade was a near-perfect parabola. Like one of those Buckminster Fuller geodesic domes, but stretched, so that head-on, the home looked like a grocery egg protruding from its carton, or an Easter egg hiding in the grass, or a boob. It was pale yellow and, yes, eggs are white, but whatever, the name made sense. The place also had an attached garage—a kind of motorcycle sidecar—plus a big backyard fenced in by cypress trees. Only two other houses in the cul-de-sac, one of them empty looking with a sign in the yard that read, in escrow. Lots of privacy.

On top of The Egg, wearing purple sweatpants and a purple hoodie, was Mathias Blue. With a small hand axe he was hacking away at a tree branch that had fallen on the roof, trying to break it into two pieces, making it easier to move.

Despite the snow, he looked much warmer up there than the first time they’d met at the Stony Brook and even more impressively tall, high atop The Egg. Yet there was something elfin about him, pointy ears and an angular chin punctuated with a pyramid of hair. David remembered thinking Mathias was a grad student when they first met and being surprised to learn he was only a sophomore. Mathias had taken at least a year off school to travel, so he was maybe two or even three years older, but they were basically the same age, which made David feel strangely jealous. Hearing the car arrive, Mathias tucked his axe into his sweatshirt pouch and climbed down a ladder.

Clearly, Mathias knew stuff about carpentry and other manly things David now felt a dire need to learn. Seeing that axe, it started to sink in that this was the reality of off-campus living: no school-sanctioned maintenance crews to fix things. David was okay at hanging shelves or assembling IKEA furniture, but he wanted to understand electricity and plumbing and other household guts no one ever taught him. The notion had been weighing on him: that there was something inherently more noble about knowing how to fell a tree or skin a fox or rebuild a carburetor compared with the high-minded skills that made one attractive to Ivy League admissions officers.

But still, what was he doing here, moving into this architectural relic with a bunch of crazy people? These guys were part of the scant 2 percent of students who lived off-campus. David had witnessed his roommate Owen’s meltdown firsthand, but what tragedies had befallen the others? He wondered if they’d been kicked out, too. He wondered if they, like him, could no longer conduct themselves in a manner befitting a Princeton Man. At least David wasn’t the only one. He’d read that the fall semester had seen more dropouts and leaves of absence nationwide than the previous three years combined. Kids reclaiming their time before time was officially up.

David hadn’t noticed the quantitative shortening, but the qualitative shift was real. Despite what clocks and scientists said about chronostrictesis, it simply felt as if there were fewer and fewer spare moments. Outside the Princeton bubble, futures markets speculated on the value of the minute. Unions picketed for wage increases, while CEOs threatened pay cuts for “shortened” workdays. A disorganized governmental agency began regulating calendrics and temporality, with some lobbying for a recalculation of the second and others wanting adjustments of the month or year. Plenty wrote it off as soft science. There was no truth, they claimed, to chronostrictesis.

A minute was a minute.

Shimmying down from the roof, Mathias grabbed a milk crate full of booze. He tossed a full bottle of vodka into a nearby garbage can. It smashed delightfully.

It was then that David got a better look at that fairly serious hatchet also sticking out of his sweatshirt. David was going to ask about it, but instead, he said, “Nice pants.”

“Hey, thanks for thinking my pants are nice,” Mathias said back.

David pointed to the Buick, its trunk overflowing with his boxes of books. Fu began unloading them into the house, one balanced atop each shoulder, seemingly a welcome excuse for aerobic drills. Lee stood by, smoking, engrossed in his phone.

David took a longer look at the axe. Black iron axe head and a cherry handle, straight out of the Middle Ages. He tried to stay cool. Mathias seemed to sense concern and held the blade gingerly for David to see.

“You told me your grandfather made jet engines,” Mathias said. “Mine used to make weapons. Guns and knives and hatchets for Civil War reenactments. I think he was the main guy doing it at one point, so he was a big deal in certain circles. He’s dead now, but he gave me this axe. I’d like to make it into a functional wood splitter, while still retaining its original integrity, like how you co-opted your grandpa’s blazer. Hey, is there actual vino in those wine boxes?”

“Books,” David said. “I hope you’re not dumping alcohol on my account?” When they last spoke, David had mentioned, with no small sense of pride, his recent decision to quit drinking.

“Don’t flatter yourself.” Mathias winked. “Lee’s been tinkering with the chemistry in these bottles and accidentally created poison. You know anything about distillation? Don’t worry, you’ll pick it up quick. It’s a crazy useful trade skill for when shit hits the fan, regardless of whether or not you actually drink the stuff. Here”—he handed David a full bottle of brown liquor and pointed to a car across the cul-de-sac—“go ahead and chuck this at that Nissan Sentra.”

“I’m concerned that you’re hazing me prematurely.” David was trying to say no.

“It’s not hazing. More of a Buddhist koan. You don’t know whether I want you to be the type of guy who will smash the bottle just because I asked or the type of guy who will tell me to go fuck myself. Maybe I’m not looking for either response, just a little creativity. Maybe you hand me an orange peel and yodel. Either way, it kinda comes down to imagination. And maybe balls.”

David barked a single laugh. Mathias reminded him of a prince in disguise, possibly a bit psychic. In response to the liquor bottle koan, David decided to recite a favorite Walden quote:

“‘Is it impossible to combine the hardiness of savages with the intellectualness of the civilized man?’”

Mathias snatched the bottle from David’s palm and, with a graceful hook shot, catapulted it end over end toward the middle of the cul-de-sac. It exploded dead center, splattering glass and froth across the snow-dusted pavement.

“The answer is yes,” said Mathias. “Yes, it is possible.”

It was then that David became aware of the next-door neighbor, a mustached middle-ager in a teal Miami Dolphins jacket. He was boarding up his windows. The guy looked at them, brow furrowed. David assumed they were in very big trouble.

Then the neighbor called out to Mathias, “That wasn’t the good stuff, was it?”

“No, that was horse piss,” Mathias yelled back. “I’ve got a box of good stuff all packed up for you, Fred. No worries!” With that, Fred went back to hammering.

“Sixteen inches,” Lee relayed from his phone, and walked inside.

“What about the glass?” David asked.

Lee poked his head back outside and yelled, “No, two feet. They’re closing schools.”

Mathias looked taken aback. “Have you seen the weather lately? People have every reason to go crazy, yet somehow remain sane. It pays to be prepared. This place loses power if you sneeze wrong. I love it to death, but it’s a bit dumb.” He waved his axe around and said, “Nobody makes triangle-shaped plywood!”

“Can I case the joint?” David asked.

“First we need to batten down the hatches.” From his kangaroo pouch Mathias pulled a printed list and a softball-sized wad of cash. He plucked off some bills. “You’re new, so you’re on grocery duty. Here’s our list. And get the usual apocalyptic provisions, too. Water, batteries, canned soup, gasoline, pet immunization records, puzzles, whatever it is you like to eat and drink.”

“Is this another koan?”

“No, this time I’m hazing you.” The clump of twenties and a set of car keys dropped to David’s hand. Mathias gave directions to the fancy supermarket up the street.

“Go,” he said. “It’s gonna get seriously dangerous to drive within an hour. We’ll get you acclimated when you get back. You’ll enjoy living here.”

“Even though it’s dumb?”

“Why did you pick this house?” David wondered aloud.

From We Can Save Us All. Used with permission of Unnamed Press. Copyright © 2018 by Adam Nemett.

Did Lao-Tzu and Confucius Know Each Other? 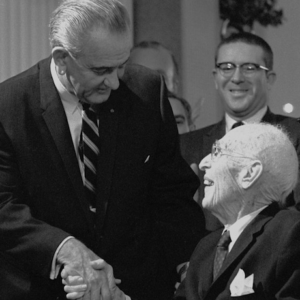 Lit Hub Weekly: December 10 - 14, 2018 “Is it really okay to talk about art right now? To leave the real and broken world behind and talk about fictional...
© LitHub
Back to top