Watch the Creepy 1969 Short Film Adaptation of “The Lottery”

Shirley Jackson’s most famous work—and indeed one of the most famous short stories of all time—is undoubtedly still “The Lottery,” a short story that she published in the June 26, 1948 issue of The New Yorker. You probably knew that already. You might or might not know, however, that in 1969, Larry Yust directed a short film version of the story as part of Encyclopedia Britannica’s Short Story Showcase, a series of educational films produced expressly to be shown in classrooms. This, I have to say, is a pretty dark film for high school classrooms, but it proved to be one of the series’ most popular.

Even if you know the story already, the film is unsettling on its own, and definitely worth a watch. The beginning is almost like a pointillist rendering of a town, jumping between snatches of conversation, showing shots filled with faces and feet. But all the mundanity (and the stilted acting) only makes what comes next all the creepier. If you don’t know, I won’t ruin it here, so watch for yourself below: 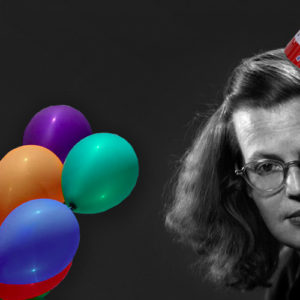 Watch the Creepy 1969 Short Film Adaptation of "The Lottery" Even if you know the story already, the film is unsettling...
© LitHub
Back to top