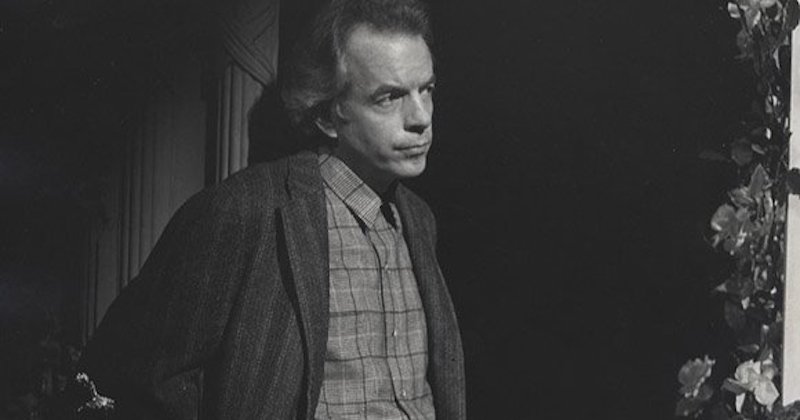 Tomorrow marks the 124th birthday of Thornton Wilder—and we’re celebrating by watching the opening monologue of the formally innovative Our Town delivered by another theatrical innovator, Spalding Gray.

Spalding Gray as the Narrator in Our Town seems like perfect casting: Gray was known for his solo monologues, like Swimming to Cambodia, which stripped down the theatrical event to just narrative and openness. (One guy talking directly to his audience . . . sound familiar?) And yet, when Gray played the Narrator in the 1988 Lincoln Center Theater revival of Our Town, his performance was met with puzzlement and frustration. The New York Times review of the production cited the show’s strengths but went in on Gray:

One major casting miscalculation, Spalding Gray’s flip Stage Manager . . . constantly disrupts the fragile text, the firm staging and the otherwise well-chosen cast. Mr. Gray notwithstanding, the virtues of this production are there to be savored . . .

Wilder was primarily a celebrant of the small town and the American century; he was not a debunker to be confused with Sinclair Lewis or Edgar Lee Masters. The attempt, through Mr. Gray, to turn the playwright into something he’s not derails Mr. Mosher’s ”Our Town.” While it would no doubt be sickening to see a Stage Manager resembling the lovable old codgers in wine-cooler commercials, Mr. Gray swings too far the other way, presenting the narrator as if he were a narcissistic new-wave raconteur exactly matching the storyteller in his own autobiographical performance pieces. Much as one may have enjoyed Mr. Gray’s ”Terrors of Pleasure” and ”Swimming to Cambodia,” their blase TriBeCa hipness belongs to another planet than that of ”Our Town.”

Mr. Gray’s silver hair and New England accent do serve the role. His smart-aleck attitude and lapsed preppie outfit do not. ”Nice town, y’know what I mean?,” says the Stage Manager early in the play; in Mr. Gray’s delivery, the second clause of the line is punched with a snide cynicism, as if to imply that Grover’s Corners is less a nice town than a precursor of the setting of ”Blue Velvet.” One can’t really fault the performer; he’s just doing his star turn out of context, following the Lincoln Center company’s indulgent example of Robin Williams in ”Godot.” Mr. Mosher should have realized, however, that ”Our Town” becomes merely unpleasant, rather than revisionist, when our guide through Grover’s Corners seems to be condescending to his fellow performers, the audience and the play.

You can see the review grappling with Gray’s still-novel minimalism, trying to justify its distaste, trying to classify Gray’s affect as cosmopolitan and cynical rather than just simple. Yet Wilder himself said that Our Town was too rarely performed how he wanted it to be performed: “without sentimentality or ponderousness—simply, dryly, and sincerely.” Gray’s performance of the opening monologue seems faithful to that spirit; it lets the surprising speech act he’s performing be the star. If you want to weigh in on the hated delivery of “know what I mean,” or simply experience Wilder’s monologue anew, you can watch the monologue below: