Goodbye to One of our greatest novelists

Famously, at the very same National Book Awards ceremony where Hazzard was to be recognized for The Great Fire, Stephen King was given a lifetime achievement award, and in accepting it, gave a fairly aggressive speech about the divide between “popular” and “literary” fiction, championing the former and listing great writers he felt were continually ignored by the people in the room. “What do you think? You get social or academic brownie points for deliberately staying out of touch with your own culture?” King asked. “Never in life, as Capt. Lucky Jack Aubrey would say. And if your only point of reference for Jack Aubrey is the Australian actor, Russell Crowe, shame on you.”

When it came her turn to speak, Hazzard deviated from whatever acceptance speech she had planned to address him:

“I want to say in response to Stephen King that I do not—as I think he a little bit seems to do—I don’t regard literature (which he spoke of perhaps in a slightly pejorative way), I don’t regard the novel, poetry, language as written, I don’t regard it as a competition. It is so vast. We have this marvelous language. We are so lucky that we have a huge audience for that language. If we were writing in high Norwegian, we would be writing in a great ancient language but we would have mostly reindeer for our readers. I’m not sure that that is the ideal outcome. We have this huge language so diverse around the earth that I don’t think giving us a reading list of those who are most read at this moment is much of a satisfaction because we are reading in all the ages, which have been an immense inspiration and love to me and are such an excitement.

I can take one of the ancient poems of our language and feel so excited and moved and even sometimes terrified by it that it seems very immediate to me. I don’t see this as “we should read this or we should read that.” We have mysterious inclinations. We have our own intuitions, our individuality toward what we want to read, and we developed that from childhood. We don’t know why. Nobody can explain it to us.

I think America especially is drowning in explanations and what we need is more questions, not explanations, perhaps, because the explanations are not leading us into good places, at least the official ones that I hear.”

Which is only to say that this woman was brilliant, and dignified, and pretty wonderful. In further celebrating her life, I now present two clips—one of Hazzard reading her own work, and one of her in conversation with Richard Ford. Both are worth your time this week.

Shirley Hazzard in conversation with Richard Ford at the 92nd Street Y on April 30, 2010, punctuated by readings of Hazzard’s work by Annabel Davis-Goff.

In one nice moment, Ford asks her about poetry: “I know it’s horrible to have things that you say be held up to you again after you’ve said them, as though you really meant them—but you said once that you didn’t know how people could live without poetry. … It made me wonder: how do you think people who don’t have poetry actually do live?”

“Well I think about this too. It can’t be forced on people. Now you’ve got to listen to poetry, grabbing them by the lapels or something. Poetry comes in different forms, it can come in mere feeling, I think, people realize within themselves that they have deeper feelings than language always allows them to express. And poetry can save very much the souls of people who feel that way—who feel cut off from a deeper thing within themselves, and having to fit in with much more daily forms of expression.”

Also for your viewing pleasure, here is Hazzard reading from her own work—the National Book Award-winning novel The Great Fire—at the 92nd Street Y in November of 2003. 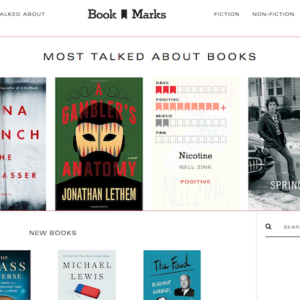 We launched Book Marks just over six months ago and in many ways, it has succeeded: more than a million people have visited...
© LitHub
Back to top