We’re very happy to introduce a new video series at Lit Hub to benefit the wonderful Mighty Writers, a Philadelphia-based non-profit that teaches reading and writing to thousands of low-income and marginalized students every year and is seeing more need than ever during the pandemic (head here to learn more). Over the next few months we’ll be asking singer-songwriters about their writing and reading lives—their influences, writing habits, favorite books—and while they’re at, to play us a song or two.

Up first is singer-songwriter Amanda Shires, whose latest single is “Deciphering Dreams,” and who’s been heard of late with all-star, supergroup The Highwomen. Amanda performs a couple songs with Jason Isbell and the two chat about writing advice, favorite teachers, and more.

Amanda Shires: One of my favorite teachers that I had was in fifth grade. I moved around a whole lot because my mom was a single mother with two kids and she was working her way out of public housing, into rented houses, until we finally got a house of our own. And the best teacher I had was in fifth grade. Her name was Maddie Mae McKinney and she was the kind of teacher that went out of her way to help, and to instill a sense of confidence… or “you can do it.” And she’d spend a lot of extra time with me when I felt I was falling behind and she showed me that I was still capable of catching up. Yeah, she’s my favorite teacher. […]

Amanda Shires: One of the best pieces advice I ever got was when I was studying at Sewanee University in the south. My professor, Andrew Hudgins—who is a fantastic and wonderful poet—told me that a lot of times when you’re writing, the actual start of where you think the start is, isn’t at the start. Like, your first paragraph, your first few verses, first lines or whatever it is… usually you’re doing the work to get to the start. After having thought about that, some, internalizing it, I found it to be true, and so now it’s easier for me to get rid of that beginning, working stuff and get to the actual start.

Jason Isbell: I like that. So sometimes you’re finding your way to the story you want to tell. And then when you get to the beginning you can just go back and take all that stuff out, and start from the start.

Amanda Shires: Exactly. Did you ever get any good writing advice?

Jason Isbell: Yeah. You know, I’ve gotten some very good writing advice. There’s a book that Tom T. Hall wrote on songwriting—wrote a couple of them—and the first one had a paragraph in there about not being bitter. And I really enjoy that because I write a lot of sad songs… I think most songwriters do, you know. And he talked about being angry or sad without being bitter; he said people don’t want to hear a bitter song but sad is ok and angry is ok. And so I’ve very often tried to ride the line between, you know, being sad or being unhappy about something and what I’m writing, and also pointing the finger at somebody and being bitter or resentful… so I try to keep that out of there.

Once Upon a Time, When America Paid Its Writers 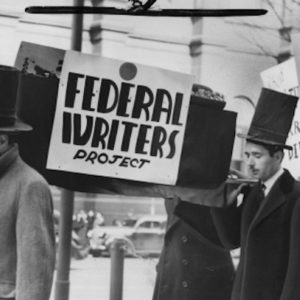 Once Upon a Time, When America Paid Its Writers In February of 1935, at the end of a hellishly cold winter, a small group of writers bundled up in coats and carried signs...
© LitHub
Back to top