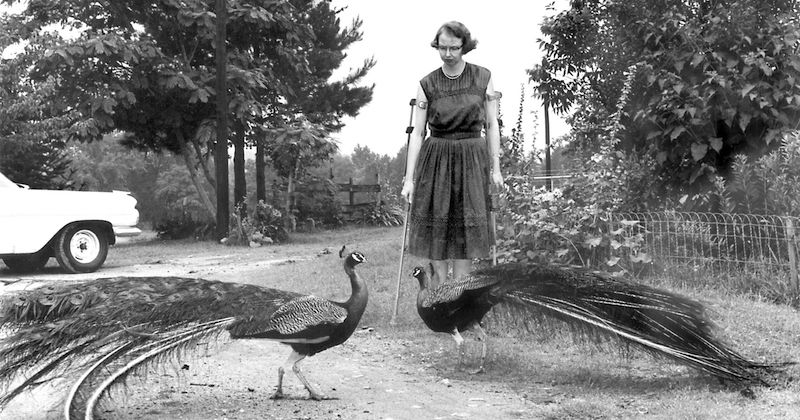 In her 1961 essay “Living With A Peacock,” Flannery O’Connor traces her adult proclivity for raising birds back to a childhood memory: “When I was five, I had an experience that marked me for life. Pathé News sent a photographer from Savannah to take a picture of a chicken of mine. This chicken, a buff Cochin Bantam, had the distinction of being able to walk either forward or backward. Her fame had spread through the press and by the time she reached the attention of Pathé News, I suppose there was nowhere for left for her to go—forward or backward. Shortly after that she died, as now seems fitting.”

Happily, this formative moment is still available for our viewing pleasure. In the minute-long 1932 news segment, “Do You Reverse?”, we get a glimpse of a young, serious Flannery O’Connor (“Mary O’Connor of Savannah, Georgia”) holding “an odd fowl, that walks backward to go forward so she can look behind to see where she went!”

It’s a sweet video—and fun to see the reality of the experience that ballooned in O’Connor’s mind. “From that day with the Pathé man,” continues O’Connor in the peacock essay, “I began to collect chickens. What had only been a mild interest became a passion, a quest. I had to have more and more chickens. I favored those with one green eye and one orange or with over-long necks and crooked combs. I wanted one with three legs or three wings but nothing in that line turned up . . . I began to make clothes for chickens. A gray bantam named Colonel Eggbert wore a white piqué coat with a lace collar and two buttons in the back. Apparently Pathé News never heard of any of these other chickens of mine; it never sent another photographer.”

The Pathé News segment stayed a favorite anecdote of O’Connor’s through the years. A pithier telling was chronicled in Rosemary M. Magee’s Conversations with Flannery O’Connor:

When I was six I had a chicken that walked backward and was in the Pathé News. I was in it too with the chicken. I was just there to assist the chicken but it was the high point in my life. Everything since has been anticlimax.

Her readers might say otherwise—but as far as high points go, this one’s pretty high.