Was Freud a Scam Artist?

The figure of Sigmund Freud has captivated the Western imagination like few others. One hundred and twenty-five years after the publication of Studies on Hysteria, the good doctor from Vienna continues to stir controversy in institutions, academic circles, and nuclear households across the world.

Perhaps Freud’s sharpest and most adamant critic, Frederick Crews has been debating Freud’s legacy for over 30 years. His latest work, Freud: The Making of an Illusion (Picador, 2018) challenges us with an extensive psychological profile of the legend here revealed as scam artist. What some analysts might argue to be a 750-page character assassination, Crews maintains is simply a recitation of facts which leaves readers to draw their own conclusions. One might wonder if the story of facts that is conveyed is not itself a counter myth.

Was Freud a megalomaniacal, greedy, cocaine-addled opportunist and psychoanalysis a pseudoscience that has reigned tyrannically over 20th-century thought? Making use of Freud’s extensive letters to Martha Bernays, Crews paints a “damning portrait” (Esquire) of a money hungry, adulterous, and uncaring man.

How can this portrait be reconciled with the radically meaningful and deeply transformative process many of us know psychoanalysis to be? Is the tyranny of rationality preferable to the tyranny of myth? Does the unmaking of the myth of the man undo the gift of his work?

In this interview Crews responds to questions of what it means to have an empirical attitude, how we should “test” the process of healing, what’s so tempting about Freud, and what should become of psychoanalysis today. The Crews of the Freud wars is back again, and he’s going in for the kill shot.

Frederick Crews is the author of many books, including the bestselling satire The Pooh Perplex and Follies of the Wise, which was a finalist for a National Book Critics Circle award. He is also a professor emeritus of English at the University of California, Berkeley, a longtime contributor to The New York Review of Books, and a member of the American Academy of Arts and Sciences.

Cassandra B. Seltman is a writer, psychoanalyst, and researcher in NYC.

Apple (Skin to the Core) by Eric Gansworth, Read by the Author 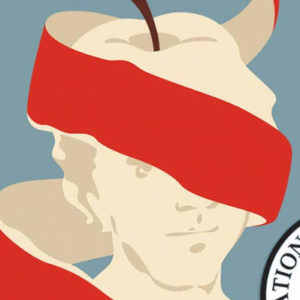 Apple (Skin to the Core) by Eric Gansworth, Read by the Author