Is any poem’s title, or any artwork’s for that matter, intrinsic to the text itself, absolutely necessary or totally superfluous; or is it something of an add on, a supplement, a feuilleton inserted above and before we start reading? Auden proposed the distinction between poems that one could guess the title without knowing it already, and those you couldn’t. Reading Charif Shanahan’s new poem, Wanting to Be White, one could never guess its title. What seems to be an evocative, gorgeous description of a waterfall, the mind embracing the natural world, an homage to Jorie Graham, now demands to be reread as flowing from a source that anchors the poem in a profoundly historical, racial—and I’d argue powerfully personal—context. These two parts, title and body, play back and forth in my mind endlessly until I am more conscious not only of the poem’s speaker, whom I imagine as a person of color, but also conscious once more of “nature poetry” itself as a predominantly Euro-American, white, historical phenomenon. The allegorical torque of this opaque hymn leads me finally to the word “source”—and it is there, in Shanahan’s meditation I am forced, powerfully, humbly, to reconsider poetics and race, distinct yet indivisible in the American grain.

How easy for the waterfall to turn back

into the river, the long, silent face

holding all that has passed through it

undisturbed…. Then, within it,

a shadow moves—a turtle, or

trying to exist beyond its own watery nest—

and the face darkens,

insists on its own incessant breaking, an anxiety,

a completion at once its own negation,

merging at its most opaque

merely to taste the air,

the always witness to this relentless constructed flow

unable to hold itself

beyond the falling of its own nature,

asserting itself only to destroy

itself. The sky is

taking its motion from the surging above, urges,

no way out, no way to extract

itself from its own circular endurance,

until it carries itself back to its own source.

Charif Shanahan is the author of Into Each Room We Enter Without Knowing (Southern Illinois University Press, 2017), winner of the 2015 Crab Orchard Series in Poetry First Book Prize. He is the recipient of an Academy of American Poets Prize and twice a semi-finalist for the “Discovery”/Boston Review Poetry Prize. His poems have appeared or are forthcoming in numerous journals, including Apogee, Barrow Street, Boston Review, Literary Hub, The Manhattanville Review, The New Republic, Prairie Schooner, and elsewhere. His translations from Italian and German have appeared in A Public Space, Circumference, and RHINO Poetry, among other publications, and have been performed by the Vienna Art Orchestra. A Cave Canem graduate fellow, he holds degrees from Princeton University, Dartmouth College, and New York University. Formerly Programs Director of the Poetry Society of America, Charif is poetry editor of Psychology Tomorrow Magazine and a Fulbright Senior Scholar to Morocco.
Share: 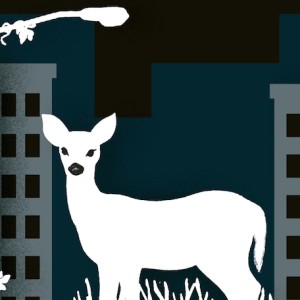 On the End of the World (and the End of Genre) Laura van den Berg, whose debut novel Find Me is now available in paperback, and Emily St. John Mandel, author of Station...
© LitHub
Back to top