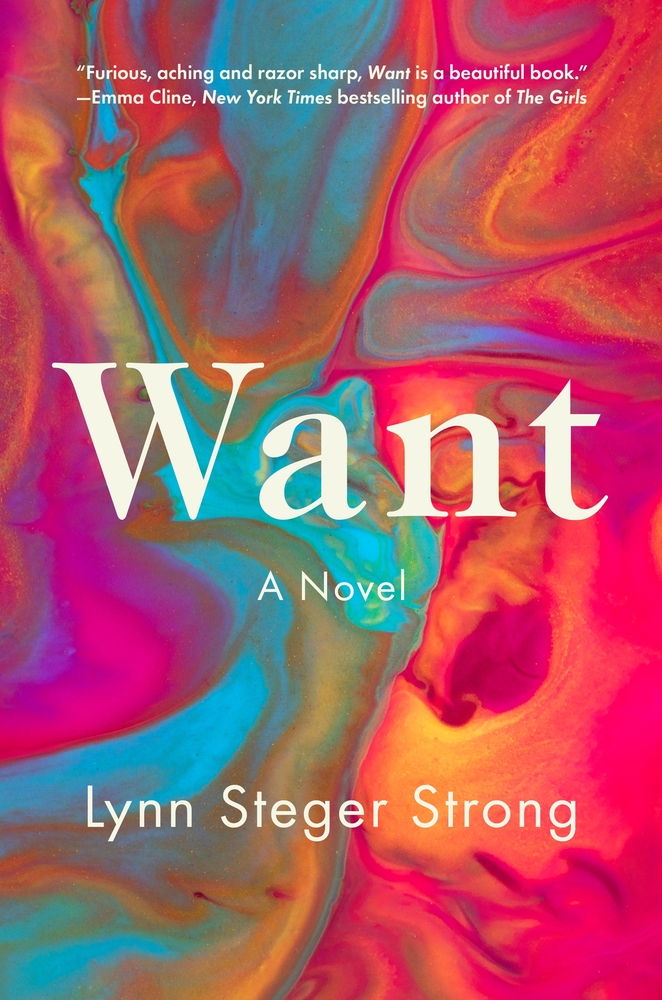 The following is excerpted from Lynn Steger Strong's new novel, Want. Strong's first novel, Hold Still, was released in 2016. Her nonfiction has been published by Guernica, Los Angeles Review of Books, Elle.com, Catapult, Lit Hub, and others. She teaches both fiction and non-fiction writing at Columbia University, Fairfield University, and the Pratt Institute.

I was 13 and she was 14 and we were high school freshmen. A boy I thought I loved loved her, and I stayed on the phone with him sometimes late at night with him discussing her. I think I thought that if I listened hard or well or long enough that he’d love me instead. Instead, they broke up, and he stopped calling. And then there she was. I knew everything about her that any breathing person would love, the way she felt and talked as if she were a grown up; the way she was smart but also pretty but also didn’t care enough about being cool to use the power that she should have had to have more friends. Whether I wanted to love or have or just to be her never felt as easily discernible as this or that, one or the other—more like all of it, and then more, at once.

We had a class together and our teacher was sick for half the year and the sub sat at the desk reading a book and we sat in the back of the room and talked. “Talked” does not begin to hold inside it what we did together. We sat in the school issue chairs attached to desks, my knees up to my chest. She wore her hair down, curly, with product in it that made her smell grown-up. I don’t remember the words we said but that sometimes they felt so alive they had to be whispered; we had to lean close to each other, bottoms of our desk-chairs screeching. Sometimes one of us got so loud that other kids, or whatever sub we had that week, would turn from their desks and look.

You know, says Sasha, looking at me. I’m 14 and she’s 15. She goes to touch me, then thinks better of it. We’re always close but don’t often embrace. Her family is a touching, hugging unit; when people reach for me, I never know what to do with all my limbs. You might—she’s scrutinizing. I know I’m turning red. She reaches down and touches my ponytail. You might be prettier—she wouldn’t say just “pretty”. It’s important she gives me that, no matter what. It’s a word she’s always had a right to, a world she will always, easily, possess. I mean, you’re pretty, naturally. She smiles. I can’t stand this kind of looking. But if we let your hair down—she takes out the rubber band. My hair is nearly black and thick, and though I always wear it up, when loose, it reaches to the middle of my back. I feel my spine rounding, my shoulders closing in. Do a little something, not too much, but something to accentuate your eyes.

She teaches me things mothers are supposed to teach: how to use a tampon, apply mascara, find a bra that fits. How to talk out loud about ideas I’ve only let form in my head.

Sometimes, after school, we go to her house and hang out with her mom. Her family has less money than my family. The concept of money is sufficiently safe for me at this age, available without acting as a hindrance, that both its presence and its lack feel equally abstract. My mother’s ostentatious car, vacations twice a year, our massive house; the too-big boxes of cereal and jars of peanut butter stored in Sasha’s pantry from the Costco half an hour away, their biggish house passed down and things breaking all the time and nothing getting fixed. My mom works 60 hour weeks and when we sit down for dinner at nine or ten—because that’s when she’s gotten home, but also, she wants to make my sister and me dinner—she and my father ask us the grades we got on tests, my times on the track. There is always too much food, so much food, made with cheese and milk and butter and my sister and I learn slowly—because we’ve been taught since we were very small that fat is lazy and disgusting—that we have to either only pretend that we are eating or to eat only this meal every day. We sit across from each other, our mother and our father at either end of the table. They spend the time leading up to dinner talking about work. My mom cooks and my dad makes the drinks, one and a half shots of gin with tonic for my mother, a whiskey and Diet Coke for my dad. They have these before dinner and then wine and beer with dinner, one and then another. My sister and I linger in our rooms or on the outskirts of the kitchen. We do homework, watch TV. Both our parents change out of their suits. When we sit down, the TV’s on, but we talk over it for the first 20 minutes. How was practice? asks my father. My sister doesn’t run and hates this part. Fine, I say, most of the time. We did speed today, I say. It’s understood I won if we did a speed workout. Sometimes I tell the stories that I know most please them: that I lapped some of the slower girls during intervals, that Coach sent me to run with the boys again. I hate running with the boys and do not talk the whole time and they seem to hate me even more when we have finished. They all need to stay at least a step ahead of me and we run faster than we’re supposed to. None of us is willing to let the other beat them, and it’s hot and humid and we come back sweating, panting; none of them look at me the whole time. We come back angry, our legs and arms and shoulders tight; we suck down water, and the girls are already back and waiting, hardly sweating, and they all talk together and I pour water over my head and walk back to my car or ride alone. How was math? my dad asks, because I’m in an advanced math class, was skipped ahead at their request, and this is something that he likes to ask about. Fine, I say again. I’m not as good at it as they think and I lose focus. I feel too young, everyone else feels so much older, and I sit in back and read a book in my lap as the teacher talks. My sister is a champion debater and I’m grateful when the focus turns to her and what she’s done or won or how she is preparing for her next competition. Her grades are not as good as my grades. She’s in fewer advanced classes, tests less well than I do, and my father often looks less interested when it’s her turn to speak. She eats lunch, I know, alone in the debate room. She’s two years younger than me and I drive her to school once I turn sixteen and get a car, but we seldom talk.

The concept of money is sufficiently safe for me at this age, available without acting as a hindrance, that both its presence and its lack feel equally abstract.

Sasha’s mom bakes and asks us about boys. She is a guidance counselor at the elementary school and very smart. When Sasha’s sister’s home she sits with us also and often interrupts. They all touch each other. Her sister fixes Sasha’s hair or asks midsentence if she can borrow the earrings that she’s wearing, where she got that sweater, if she thinks the shirt that she’s wearing suits her frame. She gestures often and I flinch when I sit close to her. Their mom looks hard at whichever of us is speaking and when Sasha and her sister fight in their brash, sharp way of fighting, she says, Girls, in this specific, intimate way that both makes them look at each other like she’s being silly, talking to them like they’re children, and also makes them stop, look up at her, say sorry quietly.

Of her and her sister, Sasha’s the more aberrant. She fights more often with their mother. She is the smarter of the two, but also the more reckless, the one who needs more guidance, more taking care. Her sister often scolds her in my presence. I think part of what Sasha likes about me is how rootless I am, feral maybe, that she’s the one in charge.

Even though my parents are never home, we always go to her house. My house is so clean it makes the few other kids I’ve had over uncomfortable. It’s big and cavernous, with lots of suede and dark wood. My room is upstairs, down a long hall, my sister’s room down an opposite hall on the other side, and my parents sometimes, if they come home from work and we’re in our rooms, have to call the upstairs phone line to see if we are there.

When I turn 16 I get a brand new black convertible, just exactly what I asked for—I don’t know until years later to be embarrassed by it—and Sasha and I drive out by the water on the weekends, top down, sun splotched on our faces, hair a mess. I skip school by myself; her mom has friends who work at the high school and they would tell her. When the school calls to say I wasn’t there, I just delete the message before anybody sees. I drive out to the beach and run, then walk, for hours and no one notices at dinner that there’s sand still on my feet and in my hair. I drive around and cry. My face is swollen in addition to being sunburned and I look straight at my mother as she asks me about my calc grade and she nods when I tell her it’s an A.

Our senior year, Sasha has a boyfriend much older than us all. He is at the community college and in plays. I think he’s awful and then worry I’m just jealous: of him or her, I’m not quite sure. He’s dramatic, gesturing and talking, saying nothing, but she says she loves him. We talk about him on the phone for hours. He gets us stoned on weekends at the beach and convinces us to break in to old hotel pools at night and sit naked in the hot tub, four or five girls and his one or two friends that always tag along—they don’t ever touch me—and he tells us stories about places he says he’s been. We play Truth or Dare and we are told to kiss. She grabs the back of my head and burrows her lips in my face and I breathe through my nose and my hands make small, tight fists.

Behind the Mic: On The Road to Oxiana by Robert Byron, Read by Barnaby Edwards 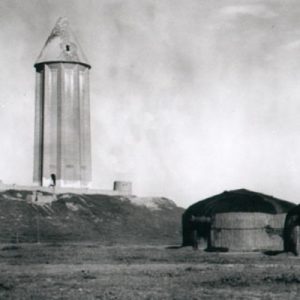 Behind the Mic: On The Road to Oxiana by Robert Byron, Read by Barnaby Edwards Every Monday through Friday, AudioFile’s editors recommend the best in audiobook listening. We keep our daily episodes...
© LitHub
Back to top