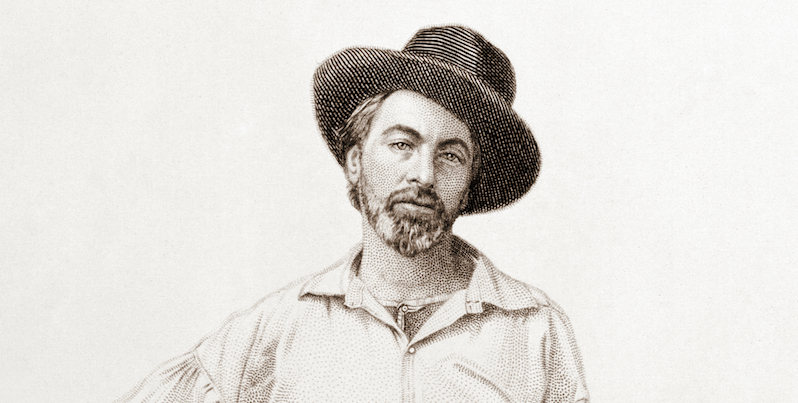 Walt Whitman’s letter to a female admirer is the nicest romantic rejection in history.

If your writing grows popular enough, sparking feelings in the hearts of admirers is an occupational hazard—and so is having to turn those admirers down. So Walt Whitman did to Anne Gilchrist, a writer and mother of four who had recently lost her literary critic husband to scarlet fever. When William Rossetti, in the process of publishing the English edition of Leaves of Grass, shared the volume with Gilchrist, she was “entirely spellbound;” she first published an anonymous essay in Boston’s Radical, titled “An Englishwoman’s Estimate of Walt Whitman” (the estimate was high), and then, after two years, began writing to him personally.

In her letters, Gilchrist praised Whitman’s writing (“[Reading your books] was the divine soul embracing mine. I never before dreamed what love meant: not what life meant.”); confided in him about her husband’s death; and confessed her love to him (“O dear Walt, did you not feel in every word the breath of a woman’s love? did you not see as through a transparent veil a soul all radiant and trembling with love stretching out its arms towards you?”). Receiving no response, she begged for one: “Spare me the needless suffering of uncertainty on this point & let me have one line, one word, of assurance that I am no longer hidden from you by a thick cloud.”

Then, today in 1871—two weeks after that last letter—Whitman finally responded to Gilchrist with the gentlest romantic rejection possible:

I have been waiting quite a while for time and the right mood, to answer your letter in a spirit as serious as its own, and in the same unmitigated trust and affection. But more daily work than ever has fallen to me to do the present season, and though I am well and contented, my best moods seem to shun me. I wish to give to it a day, a sort of Sabbath, or holy day, apart to itself, under serene and propitious influences, confident that I could then write you a letter which would do you good, and me too. But I must at least show without further delay that I am not insensible to your love. I too send you my love. And do you feel no disappointment because I now write so briefly. My book is my best letter, my response, my truest explanation of all. In it I have put my body and spirit. You understand this better and fuller and clearer than any one else. And I too fully and clearly understand the loving letter it has evoked. Enough that there surely exists so beautiful and a delicate relation, accepted by both of us with joy.

That’s an incredibly kind way to say “I’m not interested”—and, while he’s at it, he told her to just read his book again, which is a great angle to take when rejecting suitors. Alas, perhaps the letter was too kind, for Gilchrist wrote back effusively, saying that “life has no other meaning for me than . . . to [be] fit to be your mate.” She would write him many more letters, the reluctance on Whitman’s end obvious. However, this story has a happy ending: when Gilchrist eventually moved to America after seven years of communication with Whitman, they became fast friends. When Gilchrist died, Whitman memorialized her in his poem “Going Somewhere” as “my science-friend, my noblest woman-friend.” So, shoot your shot—as long as you do it respectfully.