As we all waited for the final outcome in a trial to convict or release an officer of the state for the slow and deliberate killing of a man as he lay unarmed and prostrate in the street, we also prepared for the possibility that such a killing would be vindicated and such a killer would be set free. Even in today’s reading of the verdict, the resounding words of guilty. . . guilty. . . guilty. . . there is a gap between relief and grief. We cannot un-feel or unsee the deadly act that precipitated the trial, the force used against peaceful protestors in the aftermath, or the brazen proliferation of such killings since. In that gap, we can no longer deny that to be Black in America is to live at the center of a seemingly inescapable horror.

A resurgence of films in Black chiller theater beginning with Get Out in 2017, culminating first with the summer of 2020 serialization of Lovecraft Country, and now the more recent series Them, point to a conscious embrace of the connection between living Blackness and the genre.

For me, as I watched first the death and then the trial of George Floyd through trembling fingers, I found a new reading of Wesley Brown’s novel Tragic Magic as psychological horror.

Originally published in 1978, Tragic Magic is the story of a Queens native newly released after two years in prison. His first hours as a free man take him into the abyss of memory and the bitter-sweet reality of coming home. In the forthcoming reprint with McSweeney’s, Brown recalls the novel’s first incarnation in the editorial hands of Toni Morrison, and the arc of a protagonist whose life and choices, “mirrored many of my own.”

Brown suffuses Melvin Ellington’s emergence from psychic and actual imprisonment with a music that is the lifeblood of the marginalized—jazz. Its predecessor, the blues, swells up and under Ellington’s struggle to discover the “exact notation of what and how I should play.”

The horror comes in realizing that the “how” rarely matters.

The ghosts of field songs, arguments, jailhouse jousts, heady Black Power debates, along with the living apparitions of women he has disappointed and courted, guide Brown’s protagonist even as the weight of impending doom haunts him.

If to actively resist warrants an escalation of force and to do nothing the same, then what hope was there for the man whose death this nation mourns and is compelled by duty, love or fear to watch on its loop again and again?

Much of Tragic Magic reads as fever dream. A reaper figure appears as a brother in a ruby-red suit and wide-brimmed hat, minding his own business, dining contentedly in Wells Restaurant, the famed chicken and waffle joint in Harlem. This encounter releases a torrent of blood that has been building to crescendo from the moment Ellington not only returned home, but since he began to consider what home truly is for a man whose crime was to sing his own song and refuse to pick up a gun for the purpose of waging war.

In conversation and on the page, Brown himself possesses the stirring musicality of a modal clergyman and the unflinching farseeing-ness of a mystic. Touching base via phone early on Memorial Day 2020, our talk turned to the underpinnings of violence that run up and under post-Obama, cross-racial engagement. “Every assertion of white supremacy in this country where it becomes unleashed in the most violent ways,” Brown said, “has come whenever Black people have made assertions for our right to live, and to gain and acquire the means to live, as human beings.” We did not yet know of the death in Minneapolis. When we did, Brown’s words became eerie in their prescience. I heard their echo long after our conversation ended and Darnella Frazier’s footage began.

The ghosts of field songs, arguments, jailhouse jousts, heady Black Power debates, along with the living apparitions of women he has disappointed and courted, guide Brown’s protagonist even as the weight of impending doom haunts him. From the moment of his release, he knows a reckoning is coming, and reflects, “My heart played Miles Davis doing ‘Walkin’ with all his quick note shifts, double-clutching slurs, and staccato skips. But my head slowed the tempo of my heart, cautioning it to treat freedom as if it had a very short fuse that could blow up in my face at any moment.”

Ellington and his author both put me in the mind of the unflappable, clean-cut dignity of Duane Jones in George Romero’s Night of the Living Dead. Jones in the role of reluctant hero is claustrophobically cornered, chased by wraiths who want nothing more than to feast on his flesh.  He miraculously survives them, only to be shot on sight, mistaken for the monster by a militia of would-be rescuers.

Released a decade before Tragic Magic, Night of the Living Dead became a classic in large part because of Duane Jones’ barrier-disrupting presence as an unexpected Black heroic figure mowing down hordes of the undead as they shuffle in ravenous, rhythmless pursuit of the living. Jones, a polyglot graduate of the University of Pittsburgh, rewrote his lines to accommodate the tone of his speech, to elevate the diction and comportment of a character originally written in the default whiteness of working-class, middle-America. Well before he is gunned down, Jones-as-Ben saves the white folks trapped with him in a Pennsylvania farmhouse, by turns wielding a flaming torch and shouldering a rifle. For one glorious moment, Jones is framed in the iconic posture of the vigilantly armed Black revolutionary by the window, standing his ground against the onslaught.

On Day 9 of the trial, I tuned in as pulmonologist Martin Tobin explained the jerking of George Floyd’s leg as an involuntary convulsion of the body as the brain loses its flow of oxygen. Flipped the channel and a brother in a gloriously red sweater smiled and took another spin at the Wheel of Fortune.

The lyricism of the Black chorus, its tonal demand to call and respond, is notorious for breaking, or making even more real, the fictional spell of the horror flick.

“How much time do you think I’ll get?” Ellington asks a disillusioned and delusional civil rights lawyer holed up in a hotel known for having hosted the historic meeting between Malcom X and Fidel Castro. With enthusiasm, the lawyer answers, “. . .you could luck out and get the whole five years,” then goes on to advise Ellington to not only prepare to be guilty, but to present his case in such a way that he is sentenced harshly. “It’s my position,” the lawyer rails, “that the rule of law represents the interests of a ruling class, which means that not only blacks but most Americans have never been involved in the process of codifying the rules for their security. Concomitantly, the most heinous crimes by America against its own citizens are not represented by laws . . .  ”

Wesley Brown through Melvin Ellington is interested in re-animating the Black body, stealing the self away in defiance of forces meant to contain and devour. The underground mode of conveyance is in the scat of Ella Fitzgerald, the Jericho Walls-busting notes of John Coltrane, the symphonic staircasing of Melvin Ellington’s antecedent, The Duke, conducting “Do Nothing Till You Hear From Me.”

The lyricism of the Black chorus, its tonal demand to call and respond, is notorious for breaking, or making even more real, the fictional spell of the horror flick.

We are voices that will shout out in the theater, “Look behind you,” “Mooove now,” “Get out,” “Don’t go in there,” hoping we might save the misguided, the foolish, the wrong-footed, safeguard those born without necessary reserves of gas in the tank, bullets in the gun, capital, luck, common sense, or privilege.

Shamelessly, we have been known to holler at the screen—holler at ourselves—that the call is coming from inside the house. 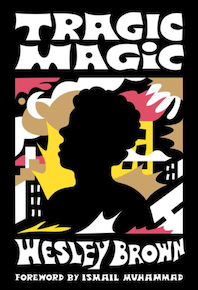 Tragic Magic, by Wesley Brown, is available now as part of McSweeney’s Of Diaspora series.

Erica Vital-Lazare is a professor of creative writing and Marginalized Voices in Dystopian Literature at the College of Southern Nevada. She has received grants and awards from the Zora Neale Hurston/Richard Wright Foundation, Virginia Commonwealth University’s Hilliard Endowment, and the Nevada Arts Council. Her work has been featured in Catalyst, Sojourner, Thrice and Callaloo II. She is co-producer of the photo-narrative installation Obsidian & Neon: Building Black Life and Identity in Las Vegas and editor of the forthcoming Of the Diaspora, a series revisiting classic Black works in literature with McSweeney’s Press. 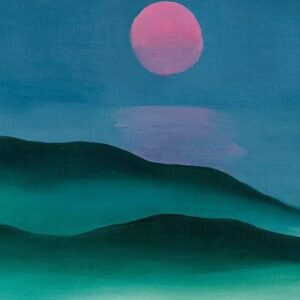 Madeleine Watts and I were both raised in Sydney’s inner-west and attended high school in the same suburb, but we didn’t...
© LitHub
Back to top
Loading Comments...