Vu Tran: The Uncertain Memories of a Four-Year-Old Refugee

A Writer Tries to Remember the Central Drama of His Life

When I tell someone about my refugee experience, a story I’ve told countless times, I’m always aware that I have no real memory of it. At some point it’ll feel as though I’m describing the plot points of a melodramatic movie. I own the story because I did live through it, but I lived through it as a four-year-old boy, so in truth I can only own that story from a distance. If memory is the self and storytelling a vehicle for self-definition, then I suppose writing fiction—whether autobiographical or not—has been one way for me to bridge this distance from myself.

My father fled Vietnam on April 30th, 1975, the day Saigon fell to the Communist North and four months before I was born. He was a captain in the South Vietnamese Air Force, having fought alongside the Americans, and would have been imprisoned in a reeducation camp had he remained. For five years, my mother raised my older sister and me without him, without knowing if we’d ever see him again. Then, in 1980, with bars of gold, she bought passage for herself, my sister, and me on a small fishing boat made for about twenty people. Ninety-two of us ended up onboard.

On the morning we left, my mother said goodbye to her parents and four sisters in the darkness, unsure if she was saying goodbye to them for the last time. We traveled from Saigon to the coast and hid for a day in some old fisherman’s house, close to the shore and to the boat that would take us to Singapore. That night, the darkest night of the year, my mother carried me on her back as a friend carried my sister, who was two years older than me, and we snuck in the darkness to where the boat was docked. Every few minutes floodlights from the coast would move over our path and we’d have to drop flat to the ground. My mother likes saying that each time she got to her feet, I felt like a child four times my size.

Swarms of people were waiting for the boat when we got there. A good number were trying to stow onboard, finally forcing the captain to disembark early and abandon many who had properly bought passage. People began diving into the water, swimming frantically to the boat, clambering up the gunwale as those onboard fought them off. Somehow, in that frenzy, my mother was able to get us all safely on the boat.

Starting in 1978 and continuing into the early 1990s, about 800,000 Vietnamese people escaped Vietnam by sea and found refuge in another country. Many thousands did not survive the journey, falling victim to illness, starvation, drowning, attacks from Thai pirates. I have a friend, also a refugee in 1980, whose boat pulled along another smaller boat, which had a broken engine. During a violent storm, when it was clear that they might all capsize, my friend’s father made the fateful decision to cut the rope that tied them to the smaller boat, casting it into the waves.

My mother, my sister, and I were lucky. Our boat ran into terrible storms too and nearly ran out of gas and drinking water, but after getting lost on the way to Singapore, the captain managed to steer us toward Malaysia instead. After six days at sea, we arrived safely at Pulau Bidong, a tiny island off the Malaysian coast, where we spent four months in a refugee camp until my father sponsored us from America. On September 12th, 1980, five days before my fifth birthday, we arrived in Tulsa, where I met my father for the first time and would spend the rest of my youth.

It’s odd the way memory works, particularly the earliest memories of your life. My very first extended memory is of my first day in America. I woke up early in the morning. I remember how differently the light felt, the slight and unfamiliar chill of late September in Oklahoma. My father made me a bologna sandwich, microwaving the bologna and toasting the bread, and serving it with 7-UP and sour cream and onion Ruffles chips, all things that I still enjoy to this day. Then I went into the bedroom I would share with my sister and rode around on a yellow plastic duck with wheels for feet.

All my memories before that day—my escape from Vietnam, my time on the refugee island—are vague and disconnected moments: eating delicious tiny dried shrimp as we hid in the old fisherman’s home; or, on the island, squatting over a newspaper under swaying palm trees to go to the bathroom; or walking into the ocean up to my neck, enveloped in that oceanic brine, a smell that has never left me.

Given my fairly uneventful upbringing in Oklahoma, I’ve often thought of those four years and 360 days before America as the most important and interesting of my life so far. Although we were more fortunate than thousands of Vietnamese refugees, I still lived through five months of constant uncertainty and impending peril, too young to understand or retain those events, those emotions, but perhaps I’ve also forgotten how intensely I experienced them at the time. On some level, because I’m a writer always looking for material, I’ve been trying most of my writing life to reclaim those years, to invent stories that evoke all that drama I’ve forgotten of my own life.

When people ask me if my novel Dragonfish is based on my own refugee experience, I want to tell them no—at least not in the way they’re thinking. Dragonfish began as a novel about a white American police officer forced to search for his Vietnamese ex-wife in the gambling dens of Las Vegas, amid the Vietnamese-American gangsters who brought him there. But the novel didn’t come together until I devised a secondary narrative, where that Vietnamese ex-wife is writing letters to the daughter she abandoned two decades ago, recounting their escape from Vietnam and their days in a refugee camp on Pulau Bidong. Those superficial similarities to my life end there, because what I actually put into the book of myself was a narrative about being bereft. Every major character in the novel—villainous and heroic, immigrant and otherwise—lives in a world where they don’t quite belong and yearns for another world to which they no longer or have never had access. It’s more than an immigrant or refugee mentality, that state of being between two worlds and not truly belonging to either. It’s about imagining a fantasy world that could have been real, struggling for and against it: the life you once had, the life you might have had, all so vastly different from the life you ended up living. And for me at least, it’s also about being a writer.

One of my favorite novels as a child was C.S. Lewis’s The Lion, the Witch, and the Wardrobe, the premise of which fascinated me: these kids walking through a wall of coats in a dark closet and entering a strange new world. What has always stuck with me was the moment the four siblings stumbled back home after living decades in Narnia as heroes, warriors, and kings and queens. As soon as they step back into the closet, they step back into the very moment they left all those years ago. I was moved by the idea that you could live so long in this alternate world and finally return home one day and no time has passed, and yet you now have all these real memories, emotions, and experiences from that other world—this space inside you that is completely full. Being a writer is something like that.

So many of the stories I wrote as a child and even into college used this same plotline: characters traveling from their normal world and into an alternate or alien world. Unbeknownst to me at the time, I was writing the story of my life as an immigrant, of that time long ago when I was a four-year-old traveling into an unknown world. But I realize now that what appealed to me about this plotline, more than the escapism, was the possibility of moving fluidly between disparate worlds, something always more difficult to do in reality. In a sense, fiction writers do this too, not only in their plots and characters and settings, but in how they’re tapping into themselves to create all these things. It’s something that we also do on some level when we read fiction. We’re engaging with some layer of the author’s memories, at least some dark corner of their lived experience, however concealed or buried in what is invented.

Vu Tran, winner of a Whiting Award recognizing “exceptional talent and promise,” teaches creative writing at the University of Chicago. He is the author of Dragonfish now out in paperback. 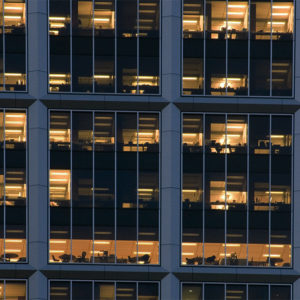 This is the vocabulary around which many of our days are structured: open offices and cubicles; dress codes and confidentiality...
© LitHub
Back to top