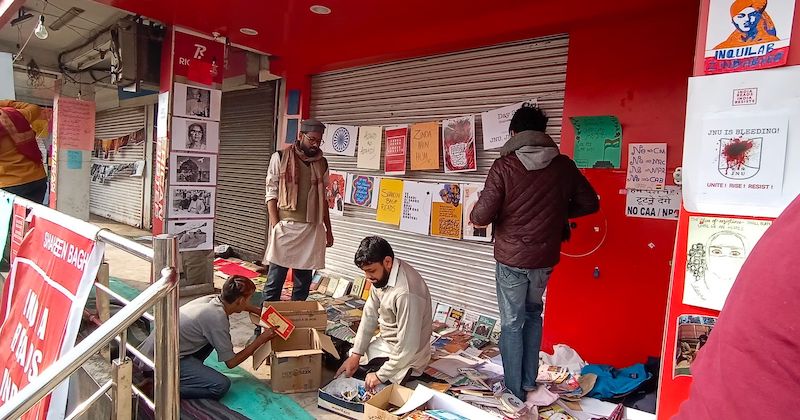 Volunteer-run, makeshift libraries are popping up at Indian protest sites.

This week, the ongoing protests in India in response to Prime Minister Narendra Modi’s controversial new citizenship law, which discriminates against Indian Muslims, have intensified and turned violent. But one bright spot is the fact that, as Maroosha Muzaffar reports at Ozy, some volunteers are setting up makeshift libraries at protest sites, with books donated by visitors. And they’re not just so protesters can while away the hours with a good novel or two. These libraries, Muzaffar writes, promise

to reshape the language of popular agitations in the world’s largest democracy. Across New Delhi, violent clashes between Hindu and Muslim mobs over the past two days have claimed at least 20 lives. But these libraries are offering an alternative form of resistance, opening up platforms traditionally reserved for committed activists to waves of first-time protesters—from high school students to homemakers—who have joined hands against moves by the government of Prime Minister Narendra Modi to introduce a religious test for naturalized citizenship.

Some of the libraries have as few as 10 books; some as many as 1,000. They are also doubling as classrooms, educating citizens on their rights under the Indian constitution—a doubling which has extra resonance, as Muzaffar explains, at a time when students have come under attack.

“It is occupying the public space and saying we’re just going to have the world that we want,” Sherrin Frances, an associate professor at Saginaw Valley State University, told Muzaffar. “It’s sort of a utopian vision, kind of it comes out of the roots of anarchy, and it has to do with appropriating space and building what you want.”

More power to them.