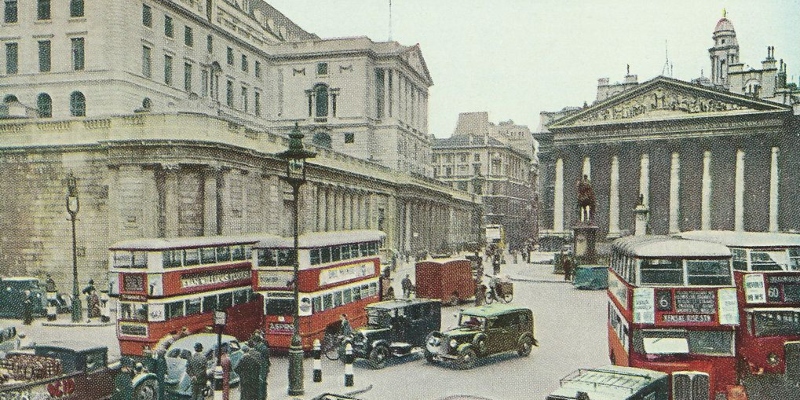 Visiting My Feminist Foremothers in a Mostly Inaccessible City

Victoria Reynolds Farmer on Virginia Woolf, Aphra Behn, and a Trip to London

In the days before my first-ever trip to London, many friends and acquaintances asked me if I was excited to go. I responded that I was; my husband and I had planned this trip to celebrate our having finally paid off the loans incurred on the way to my earning a doctorate in British Renaissance literature. But now, I confessed, I was apprehensive: How would it feel to be in buildings and spaces that I had spent so much of my life studying, like Westminster Abbey and the Tower of London, and to walk in the footsteps of some of the writers and thinkers that had most shaped my work, like Elizabeth I and Virginia Woolf? Or roll in them, as the case may be.

As someone with spastic diplegic cerebral palsy, I generally get around without aids. Since vacations require a lot more walking than everyday life, I had decided to use a chair while sightseeing. That wasn’t the source of my apprehension, though. “There’s a part of my brain that thinks these things don’t actually exist,” I said, over and over, to my friends, “so seeing them might be kind of surreal.”

It wasn’t until we got there that I fully understood how London, an old city, was not built with accessibility in mind. My husband spent lots of time lugging the wheelchair up and down Tube station steps as I walked behind him. I felt betrayed by a place I had wanted to be in for so long. In our first couple of days touring the city, I thought often of Virginia Woolf.

The majority of my academic research as a Renaissance scholar incorporated feminist theory, and Woolf’s writings in that vein had influenced me deeply, especially her hypothetical musings on the life of “Shakespeare’s sister” in A Room of One’s Own. My first experience reading that text as an undergraduate taught me that looking closely for the stories that don’t get told is just as important as being able to argue intelligently about the stories that texts do tell—sometimes even more important.

How would it feel to be in buildings and spaces that I had spent so much of my life studying?

I was thinking about Woolf’s invisible stories one morning when we were on our way to tour the Victoria and Albert Museum. We could not get on the first bus that stopped for us because each bus had room for only one wheelchair-using passenger at a time. The driver opened the door and yelled this explanation out to us. Because the bus had stopped without picking anybody up, some of the passengers near the door stared out at me from inside. I felt conspicuous and embarrassed, simultaneously invisible and too visible. I remembered a bit of Woolf’s essay “Street Haunting,” in which she offers snapshots of what it is like to walk unaccompanied in London:

A fine spring day. I walked along Oxford St. The buses are strung on a chain. People fight & struggle. Knocking each other off the pavement. Old bareheaded men; a motor car accident, &c. To walk alone in London is the greatest rest.

I was used to viewing Woolf as an ally against the oppressive norm. In that moment, though, I felt unmoored. The boisterous, noisy norm she described literally didn’t have room for me. I was between the links of the chain—walking alone, but neither walking nor alone. Greatest rest didn’t enter into the equation at all.

This trip was mostly mine—the capstone to my experience of earning a doctoral degree. Since I was picking most of the things we did and saw, while my husband pushed or picked up my wheelchair, I didn’t feel right questioning the one thing he really wanted to experience while on our trip: dinner at Dans le Noir. He had heard about this restaurant, where you eat, as its name suggests, entirely in the dark, years before. A musician he likes had mentioned eating there, and he had wanted to visit ever since. The London restaurant is one of only ten of its kind in the world, and who knew when we would have the opportunity (or the budget) again?

All perfectly reasonable, and yet I was still deeply hesitant. I don’t do a great job at walking in crowded restaurants when I can see where I’m going, much less in total darkness. I called the restaurant in advance to ask about accessibility, and was reassured that I would be well taken care of. Even so, I still worried. When reading reviews, I noted that to walk from the restaurant’s lit antechamber into the dark dining room one places one’s hand on another diner’s shoulder—as if in a sort of conga line—and moves slowly to the table. Walking in the dark while touching strangers was not something I looked forward to.

It wasn’t until we got there that I fully understood how London, an old city, was not built with accessibility in mind.

The evening of our dinner reservation came. It was time to face my fear. We lined up with the six other couples who would be seated at our table. I was behind a man named Emanuel who was there celebrating his girlfriend’s birthday. I placed my right hand on his right shoulder, as instructed. We followed our server, Nadeen, at the head of the line, who, like all servers at Dans le Noir, was blind. I was heartened by the restaurant’s commitment to inclusion, which is in keeping with the social model of disability. As opposed to the medical model, which frames disability as something to be overcome by the disabled person individually, the social model places the onus of change on society.

Even though I was initially anxious, I was heartened to spend some time in a place that reinforced my own view that disability is not an inherently negative state of existence. Rather, we disabled people can positively experience the world in a way others do not. Dans le Noir’s waitstaff are especially suited to navigating the restaurant due to the work they have already done to adapt to a seeing world, and the restaurant recognizes this.

As a sighted person, I found that I had to reinterpret my own experiences with disability in that context. I was surprised at how difficult it was for me to judge the distance from my plate to my mouth. A few times, I stabbed myself with my fork, then struggled to stay silent and hide that I was having trouble. Meanwhile, one woman announced that she was just going to eat with her hands; no one could see her anyway. That made me feel better about my own ineptitude with the fork—momentarily.

I quickly shifted from being comforted by her remarks to feeling frustrated. That she could just decide to do away with table manners without being judged spoke to her privilege. She was free of the pressure that disabled people often feel not to stand out, not to be a burden, not to take up too much space. I became determined to learn to use my fork in the dark.

I knew that somewhere, the ghost of Virginia Woolf was smiling knowingly, or maybe rolling her eyes.

Another thing that gave me pause was a joke that Nadeen made during dinner, one that she had obviously made many times before. When a couple told her that they were there on a blind date, she quickly responded, “Every date is a blind date for me!” I laughed along with the rest of the table, but I was disoriented. In this circumstance, I was passing as an able-bodied person, when what I really wanted to do—and couldn’t—was connect with Nadeen in a way that showed I understood the need to make such a joke first, before someone else does it at our expense. And that was a huge reframing of a central facet of my identity relative to those around me.

Our dinner at Dans le Noir shadowed me later that week as we toured Westminster Abbey and I searched for the tomb of Aphra Behn. “All women together ought to let flowers fall upon the tomb of Aphra Behn,” exhorts Virginia Woolf in Chapter Four of A Room of One’s Own, “for it was she who earned them the right to speak their minds.” Women ought to do this, says Woolf, because Behn is the first woman in British history to support herself with money earned by writing. I’d wanted to experience this place since the first time I’d read A Room of One’s Own as a precocious high schooler.

Behn’s memorial isn’t in Poet’s Corner proper, but off in a side hallway. One of Woolf’s central questions—who gets to tell their own stories and why—weighed heavily on my mind. When I asked a tour guide where to find Behn’s grave, she remarked, “That’s not one we get asked about often.” I knew that somewhere, the ghost of Virginia Woolf was smiling knowingly, or maybe rolling her eyes. Anonymous was a woman, indeed. I couldn’t get the wheelchair down the corridor, so I hopped out and walked, all the while hyper-aware of the discordant echo my slightly uneven steps added to such a sacred space devoted to people who seemed so much larger than me.

My husband stayed behind, partly to guard the chair, and partly, I knew, to let me have a moment alone with one of my feminist foremothers. Though I didn’t dare actually bring flowers, I did manage to snap a quick (technically forbidden) picture of the monument itself to commemorate the moment. In the picture, you can see the inscription on the black stone inlaid into the floor if you look closely. It reads, “Here lies a Proof that Wit can never be Defence enough against Mortality.”

Not only does this quotation reflect the kind of wry humor that pops up frequently in Behn’s plays, it also undeniably hammers home the fact that Behn was, in addition to being a groundbreaking artist, a mortal human—an embodied person whose time-transcendent intellect was, for better or worse, tethered to a body that was subject to age, pain, decay, and death, as all bodies are.

Looking at Behn’s monument, I thought again of Nadeen’s easy joke at her own expense, and of the many times I had made similar ones to ease the discomfort of able-bodied people. If you look even closer at my picture of the gravestone, you can see my reflection, too. 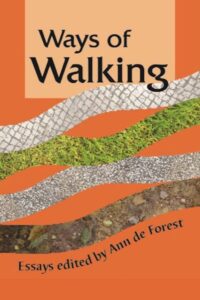 Excerpted adapted from WAYS OF WALKING edited by Ann De Forest. Copyright © 2022 by the editor and reprinted here with permission of the publisher, New Door Books.

Victoria Reynolds Farmer lives in a suburb of Atlanta with her husband. She works as a Community Manager for a market research firm. In her free time, she writes about gender, culture, and embodiment and serves as a panelist on the Christian Feminist Podcast. 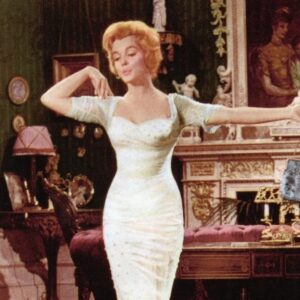 On her arrival in England, Marilyn Monroe expressed how much she wanted to meet two people—poet Dame Edith Sitwell and dramatist...
© LitHub
Back to top
Loading Comments...